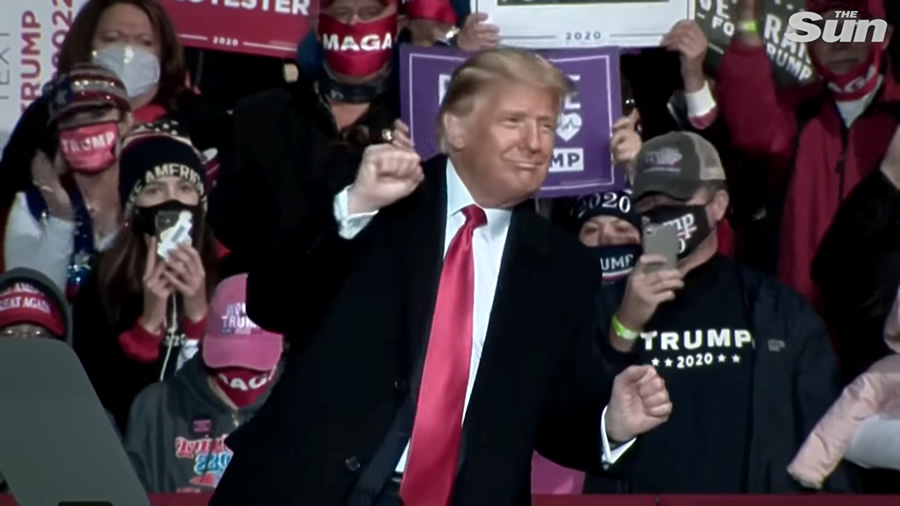 In this screengrab from video, President Donald Trump dances to "YMCA" by the Village People after a rally in Johnstown, Penn., on Oct. 14, 2020.

Only 20 days to go until America decides its fate, and decides between “duck and dodge” Biden or “dance and deliver” Trump.

Today’s campaign news has been dominated by the bombshell revelation that Joe Biden met with a Burisma executive in a meeting arranged by Hunter Biden, despite Biden’s constant denial he’s had any contact with his son involving his overseas business.

To put it another way, Biden’s been lying his dentures off.

The Fat Damn Liar Was Right

In fact, do you remember early in the primaries when Joe Biden exploded on a voter in Iowa, calling him “fat” and a “damn liar”? White House press secretary Kayleigh McEnany remembers. The voter was asking about this very issue: Hunter scoring big bucks from Burisma. Biden lit into the guy.

Remember when @JoeBiden had a bizarre outburst, where he called a voter “fat” & a “damn liar”❓

Now we know why Joe reacted so harshly to a question about Hunter & his lucrative Ukraine gig: Joe had actually met w/ the Ukrainian executive despite denials! pic.twitter.com/jwQPaqq09r

As we reported earlier, The New York Post published the damning emails. And immediately, Facebook and Twitter went into hyper-drive to stop the story from spreading. It is a gross display of election interference.

Sen. Josh Hawley is already asking the Federal Election Commission whether the social media action “constitutes a violation of campaign finance or other election laws.”

It is harrowing preview of what’s to come in a Biden-Harris administration.

My Democratic friends, do you want an America where legitimate news is censored? Where there is a blockade around the marketplace of ideas with orders to kill all news that threatens the powerful and ideas that threaten the party line?

You may think you are voting against Donald Trump. Striking a blow against Orange Man Bad. But a vote for Biden is a blow to your own throat. You are purchasing your own gag.

Joe Goes to His Basement, Trump Goes to the YMCA

While his big tech pals put a lid on the damning story, Joe Biden put a lid on his campaign activities at 9:41 a.m. this morning. Just 20 days out from an election, and the man running for the most stressful job in the world, packs it in before 10.

Perhaps, with scandal breaking out around him, he didn’t want to face the music.

Meanwhile, Donald Trump is dancing to the music.

The President busted out his dance moves again Tuesday night.

Trump has taken to shaking his groove thing at his rallies to the Village People hit, “YMCA.”  (What were you expecting after his COVID fight? “Night Fever”?)

We quickly knew the reason wasn’t that Biden was concerned with COVID. He immediately signed up to do an in-person town hall on ABC.

Still, some folks  are upset the network put Trump up against Biden. I mean, why on earth would anyone want to put the Republican nominee up against the Democratic nominee? That’s just crazy!

CNN reports that there are even staffers within NBC News and MSNBC who are “perturbed by the decision, with some likening it to collusion between the Trump campaign and the network.”

Former NBC Today host Katie Couric griped that “having dueling town halls is bad for democracy.” Yeah, letting voters decide who they’d rather listen to, or have the choice to flip back and forth, is sooooo undemocratic.

“Voters should be able to watch both and I don’t think many will.” Apparently she’s never heard of either a TV remote or a DVR.

Couric also believes, “This will be good for Trump because people like to watch his unpredictability.” Well, yeah. But maybe they’ll watch Trump because watching Joe Biden, even when answering friendly questions, is painful.

But look, it may be good for Biden. Given the odds he will have some horrible gaffe or depressing mental lapse or angry outburst, he could be lucky Trump draws away viewers.

Still, tomorrow night pits Basement Biden vs Dancing Don in prime time. We’ll have to see which one has the “Hot Stuff.”

#Election2020: Trump and His Pearly Whites Spar With Guthrie; Biden Drifts Through Town Hall as Easy as ABC