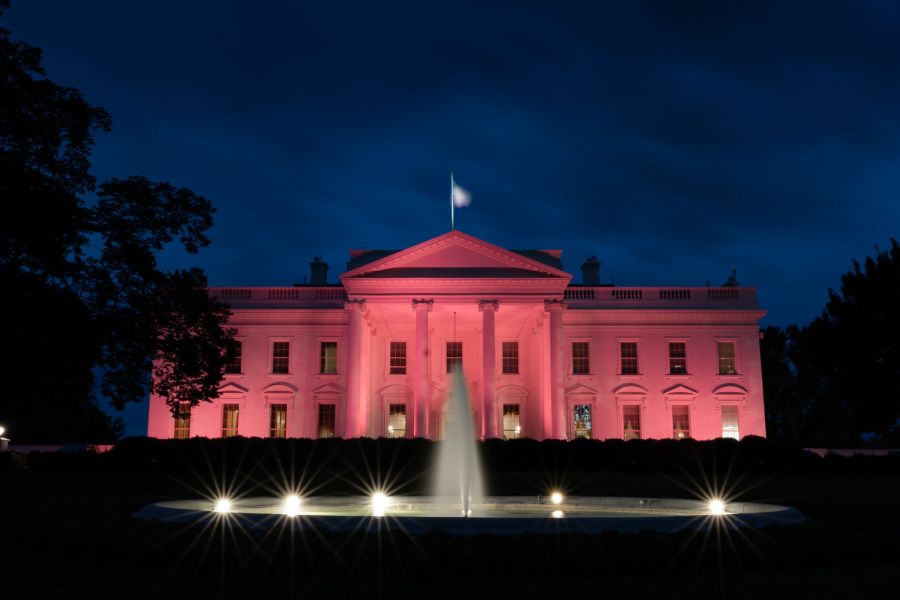 The White House was lit up in pink in honor of National Breast Cancer Awareness Month Thursday, Oct. 1, 2020. Tonight the question is whether it'll remain red when all the votes are counted.

So where do we stand at midnight on Election Night 2020?  God is on His throne.

Beyond that, it’s looking likely – but far from certain — that Donald Trump will win re-election as President of the United States. And polling, as a profession, is dead.

In Florida, Trump credited his victory to strong support from the Cuban and Venezuelan communities. The networks took forever to call Florida, even though it was clear Trump had won. They waited until polls closed in California to call it.

Trump’s increased support among Latinos and Blacks is paying dividends. 35% of Latino men and 17% of Black men, according to exit polling.

Take Starr County, Texas. The largely Latino county gave Hillary a 60% advantage in 2016. Biden only has a five point advantage.

The notion that Trump only appeals to whites is officially dead.

At this hour, Arizona is being called by Fox News for Biden. (Fox News’ decision desk has seemed determine to undermine Trump in favor of Biden all night, enraging many prominent conservative commentators.) If the AZ projection holds, this would flip a state Trump won in 2016.

However, other news organizations have not called the race, and the White House is livid. Trump’s campaign and Arizona’s governor insist there are a million rural votes that have not been counted. Votes that would break in Trump’s favor.

The Amish, which traditionally don’t vote, have added their buggies to the Trump Train. That’s proving a big help in the major swing state of Pennsylvania. And while Trump has an edge in Pennsylvania, he cannot put Pennsylvania in the W column yet. Shenanigans abound. For example, although only about 94K of the 350K mail-in ballots in Philadelphia had been counted, they stopped counting this evening and will pick up again tomorrow. Plus, since the state is allowing three more days for ballots postmarked today, the opportunity for games to be played in the historically corrupt voting process in Philly can’t be discounted.

Georgia is also playing the “We’ll pick up the count again tomorrow” game. The state also says they had a pipe burst which will slow things down. There’s also a “software issue,” in Gwinnet County, delaying up to 80,000 mail-in ballots. A 2020 gremlin or something else? We’ll see.

However, Newsmax has called Georgia for the President.

Virginia was called very early for Joe Biden by Fox News, at the start of their really bad night. But then the actual votes started being tallied and Trump won suburban Louden County by 9,000 votes, which Hillary had taken by a huge margin. Something was up in Ol’ Dominion. CNN and Fox News then retracted their Virginia projection, plucked it from the Biden win column. As of right now, Donald Trump is up by 59,225 statewide. Now, mail-in ballots still to be tabulated may well give Biden the win there, but it’s a lot closer than what it was supposed to be. And Fox News had egg on their face.

Heading into Wednesday, Trump is ahead in Wisconsin, Michigan, North Carolina and Pennsylvania. By some counts, he’s up 440,000 in Pennsylvania.

But Wisconsin says they aren’t announcing a winner tonight. Michigan is dragging it out until Friday.

As Tom Woods tweeted out:

Before Trump people celebrate, remember that if Arizon really is Biden’s, that puts Trump’s fate in the hands of three leftist governors/sec’s of state (MI, WI and esp PA), and you’d be a fool to think they’re above shenanigans.

Still, some signs Trump is on his way to victory? The Chinese Yuen plummeted. Those millions into the Biden Family coffers didn’t pay off. Betting odds also moved in Trump’s favor. What happens in Vegas, hopefully doesn’t stay in Vegas.

And regardless, God is on His throne.