And so the battle begins: Trump takes huge leads in swing states, and worries Dems are dragging things out to steal the election. 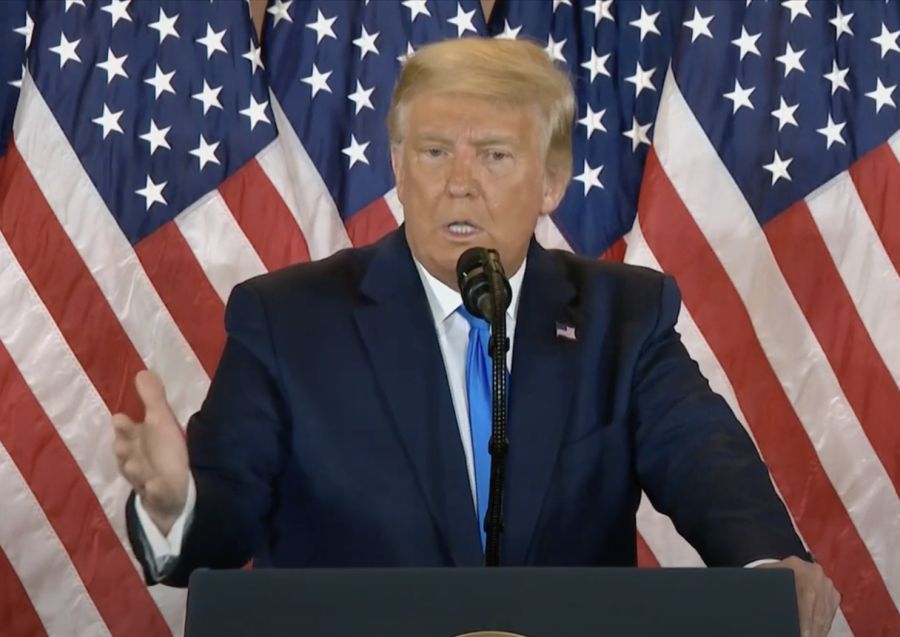 At 2:20 a.m., President Trump addressed the nation to discuss the election results as they stand. His frustration over vote counting simply stopping in key swing states where he holds sizable leads was evident from his first words:

Trump said he would be taking the matter up with the Supreme Court. After declaring his belief he had won the election, Trump said his focus now was to “ensure the integrity” of the vote. “This is a major fraud on our nation.”

The President spoke a couple hours after Joe Biden talked to supporters in Delaware.

“Keep the faith,” he said, “We’re going to win this.” Biden said he felt good about his chances to overcome his sizable deficits in Wisconsin, Michigan and Pennsylvania.

“We are going to have to be patient until the hard work of tallying the votes is finished, and it ain’t over until every vote is counted.”

The Three Major Swing States as They Stand at 2 a.m. Eastern.

“We were winning everything and all of a sudden it all stopped,” Trump said. He is hardly the only one baffled by the nearly simultaneous decision by these Democratic-run states to simply halt counting for the night.

He noted that mathematically, it would be difficult, if not impossible, for Biden to make up the differences in these states (without the help of voter fraud.)

Adding to the suspicion is Pennsylvania’s Soros-funded Attorney General Joel Shapiro stating unequivocally two days ago that Biden would win the state once all the ballots were counted.

And who can forget Joe Biden telling voters this past weekend, “I don’t need you to get elected”?

If all is on the up-and-up, Trump should still win re-election. Mathematically, it would be very difficult for Democrats to overcome all three of Trump’s large leads, even with fraud. Unfortunately, hopes that it would come without court battles and strife seem to be dashed.

Violent protesters were already at the gates in D.C. The radicals who burned and looted our cities this summer, the ones Joe Biden and Kamala Harris celebrate have their marching orders.

Fox News’ anti-Trump Chris Wallace declared the president by saying he won and what was going on was wrong “threw a match” onto an “extremely flammable situation.”

How’d it get to be “extremely flammable”? The media and Democrats (including Fox News last night) put a blowtorch onto Trump and his supporters and the American system for months — no, four years — and then when he says we’ve gotten burned they blame him.

Still, as we said, mathematically, it would be very difficult for Democrats to overcome all three of Trump’s large leads.

Let us pray that within these next 72 hours, honest results will be known, order will be kept, and no more blood will be shed.

We pray for our nation. We pray that, though we did not get it tonight, grace and peace will quickly win out.