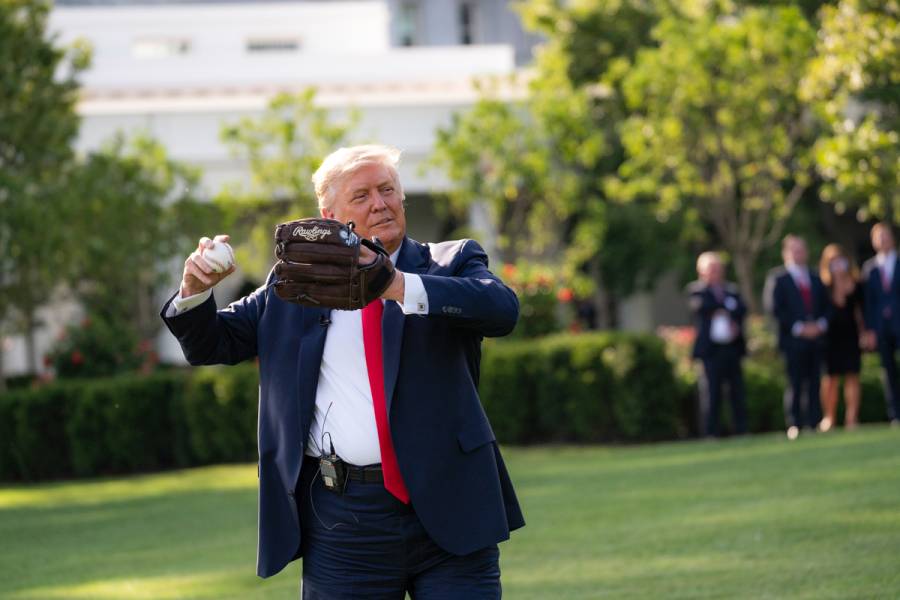 Looking to get back in the game soon. President Donald J. Trump attends the opening day of little league with Mariano Rivera Thursday, July 23, 2020, on the South Lawn of the White House.

“Don’t be afraid of Covid. Don’t let it dominate your life.”

With those shades of FDR, President Trump announced he was homeward bound and feeling “better than I did 20 years ago.” Trump was discharged from Walter Reed National Military Medical Center Monday evening. Upon arriving home, he saluted military officers and Marine One from his balcony.

I will be leaving the great Walter Reed Medical Center today at 6:30 P.M. Feeling really good! Don’t be afraid of Covid. Don’t let it dominate your life. We have developed, under the Trump Administration, some really great drugs & knowledge. I feel better than I did 20 years ago!

At an afternoon press conference, White House physician Dr. Sean Conley gave an update on Trump’s condition. “Over the past 24-hours, the President has continued to improve. He’s met or exceeded all standard hospital discharge criteria and will receive another dose of Remdesivir here today, and then we plan to get him home.”

But, he warned, the battle’s not totally won.

“Though he may not entirely be out of the woods yet, the team and I agree that all our evaluations, and most importantly, his clinical status, support the president’s safe return home where he’ll be surrounded by world class medical care 24/7.”

Unfortunately, Dr. Conley did not prescribe any treatment to cure the media hysteria over Trump’s drive-by past supporters Sunday afternoon. A full 24 hours later, and they were still having the vapors. As just one example, Joy Behar called Trump driving past supporters “right out of a dictator’s playbook.”

Congress might want to defund Walter Reed. It is a public health hazard.

Tell it to the Wounded Warriors recovering there.

All night and all morning, we heard countless moanings about the danger Trump put the Secret Service in. The folks at Twitchy made a wonderful point: “It was fascinating to watch the same people who have been fine with defunding law enforcement and turning a blind eye to cops being assaulted over the summer during countless riots suddenly care SO MUCH for their lives and safety.”

All told, it’s little exaggeration to say some in the media are upset that he’s leaving Walter Reed in a chopper rather than a body bag.

Joe Biden seems to want that as well. Or at least his ill choice of words suggests that’s so. Biden asked the crowd at a Florida campaign appearance to fantasize about Trump being delivered a “coup de grâce.” As Mollie Hemingway points out, “coup de grâce” is a “final blow or shot given to kill a wounded person or animal.”

a 'coup de grâce' is a final blow or shot given to kill a wounded person or animal https://t.co/gy81uDOaxH

Of course, Biden might think “coup de grâce” is something built by Chevy.

Speaking of driving, Biden repeated today he wants a mask mandate nationwide … even for “interstate travel.” Does that mean when driving?

He also repeated a demand for mask mandates in federal buildings. As Abigail Marone noted, he made this request at a CNN Town Hall. Here’s Biden after that townhall. Notice anything missing?

Biden, who demands a national mask mandate, often talks to folks on the campaign trail while not wearing a mask.

This photo was taken after his CNN town hall where he said he would mandate mask wearing on federal property if elected. pic.twitter.com/CN2QZbGcYQ

Sunday night on 60 Minutes, Joe Biden’s accuser Tara Reade gave a detailed account of Biden’s alleged sexual assault. Oh, you didn’t see it on 60 Minutes? That’s because the interview aired on 60 Minutes Australia. For some reason, 60 Minutes think the Aussies have a greater interest in knowing whether the Democratic nominee is a violent sexual predator than the American voter.

And here’s one lost in last week’s news. A report surfaced that the wife of a Boston Marathon hero said Biden touched her in an “inappropriate and uncomfortable way.” The Washington Examiner published the story last week … to crickets. Kim Donahue made the allegation in two Facebook posts, the second in 2016. She has since deleted the posts. “He greeted me by rubbing my back in an inappropriate and uncomfortable way,” she wrote. According to her account, Biden then pushed aside her husband, who had been wounded in the pursuit of the bombers, talked up her “mesmerizing” eyes, and asked if she wanted to ride with him to the ceremony marking the first anniversary of the bombing. “I couldn’t get out of that car fast enough, I practically dove into the pavement,” Donohue wrote in the comment section of the post.

Donahue confirms the posts were legit, but refuses to talk about them further. An individual close to Donahue claims her politics “have shifted” since 2016, and she is supporting Biden’s candidacy. In other words, she’s keeping quiet to protect Biden.

And who is protecting other women or girls with “mesmerizing” eyes?

We can’t even stop Biden from pinching British politicians.

Back in 1988, Joe Biden had to quit the Democratic primary in part because he was caught plagiarizing the words and deeds of British politician Neil Kinnock. Seems old habits for Joe die hard. His Build Back Better slogan? Borrowed from the current British Prime Minister.

Why does Joe Biden plagiarize foreign politicians so much? pic.twitter.com/odRfmIDxIY

You Say There’s No Issues With Mail-In Balloting

Finally, in today’s edition of “You Say There’s No Issues With Mail-In Balloting,” two quick stories.

First, election officials in central Virginia are warning voters who used one of six public mail-boxes to deposit their mail-in ballot to contact the U.S. Postal Service. Seems the six mail-boxes were broken into over the weekend. Neither the Department of Elections nor the USPS knows if any ballots were stolen.

Henrico (Va.) Commonwealth’s Attorney Shannon Taylor said in a statement that she would not tolerate tampering with mail or attempts to interfere with the election.

With a month before a critical election, some people are choosing to vote by mail and they must be able to know their vote is safe, will not be tampered with and will arrive in a timely fashion to their local registrar. I would just remind voters who are concerned about the whereabouts of their ballots that they can track them at the Virginia Department of Elections.

Meanwhile, a Florida man has been charged with requesting a mail-in ballot for his wife, who passed away in 2018. Larry Wiggins is a registered Democrat, but claims he supports President Trump. He also claims he was just trying to test the system. “I said well, ‘Let me just send it in and see what’s going to happen to see if they’re actually going to send a ballot for her to vote.'”

Fortunately, the system in Florida worked. But what about states sending ballots without there being a request? How many dead wives are getting ballots? And will the dead wife vote be enough to sway the election?

The Election is in four weeks tomorrow.

Election Update: All Eyes on President Trump and Walter Reed