Atlantic magazine author flees from central claim in Trump hit piece, while Joe and Kamala prove not to be on same page. 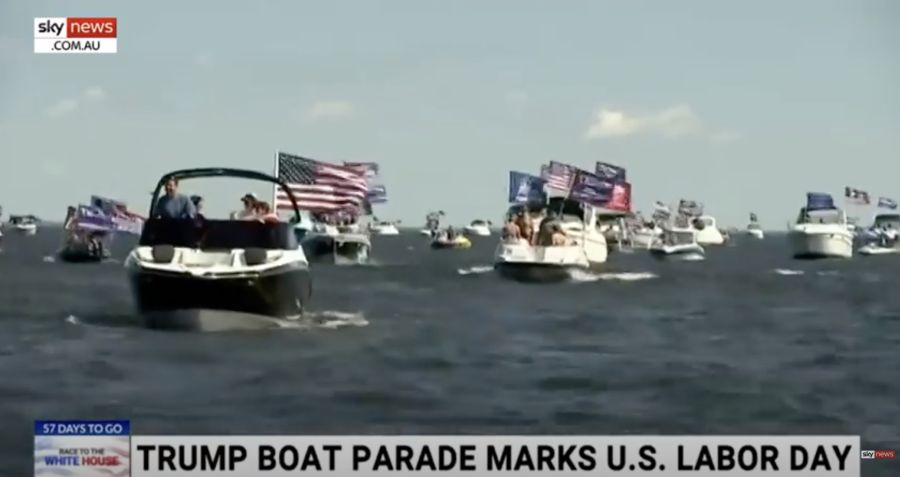 There are only 55 days to go until America decides which way it is going to turn.

With the exception of 1860, each election up til now has been like a choice between white wine and red wine. This one is a choice between a Samuel Adams beer and a Molotov cocktail. The destruction of BLM or the dream of MLK.

Between Liberty and Looting. Sanity or Socialism. Madison and Marx. (And not the funny Marx.)

November 3rd will determine the fate of the nation. Though we pray for an orderly, legitimate, clearly decided election, we must prepare for possible chaos.

But for now let’s focus on what’s been going on this Labor Day Weekend.

Uncle Joe on the Downlow

Joe Biden orders his staff to move up his teleprompter and lets out a very labored sigh while waiting for the prompter to scroll.

Is he ok? Why can’t he answer a question without a teleprompter?

That man shouldn’t be on a Zoom call. He should be on a gurney.

Two images dominated the election news this holiday weekend: Huge Trump boat flotillas on lakes and waterways coast to coast … and a parade of people on cable news condemning President Trump for saying something 10 witnesses are on record denying he said.

I’m talking about the instantly infamous Atlantic magazine story. The story quotes four  anonymous high level government sources as saying Donald Trump cancelled plans to visit a WWI memorial cemetery in France in 2018 because he didn’t want to bother seeing a bunch of “losers” and “suckers.”

The reason given at the time was weather grounded the helicopter that would have taken Trump to the cemetery.  The alternative was to drive. However, the Secret Service was uneasy about a 4-hour drive and the difficulty there’d be extracting Trump if there were trouble. Both those reasons are fact. The documentation is all there.  The Atlantic said that it is a lie. Here is writer Jeffrey Goldberg’s opening paragraph:

When President Donald Trump canceled a visit to the Aisne-Marne American Cemetery near Paris in 2018, he blamed the rain for the last-minute decision, saying ‘the helicopter couldn’t fly’ and that the Secret Service wouldn’t drive him there. Neither claim was true. (emphasis added.)

On Sunday, Goldberg conceded the opposite, telling CNN “I am sure all of those things are true.” Still, he insists the rest of his story is as pure and true as the driven snow.

Except 10 people who were either at Trump’s side during the trip or darn close have gone on the record as saying either it never happened or they never heard such a thing.

Most notably, former National Security Advisor John Bolton – who is now a Trump foe – denies it.

“If I heard it,” he told Fox New’s John Roberts, “I would have had a whole chapter in my book about it.”

Also crucially, Zack Fuentes, the top aide to former White House Chief of Staff Gen. John Kelly, rejected the Atlantic story Monday. He told Breitbart he personally heard no such quote from the President. And plunges this stake into the story. “Honestly, do you think General Kelly would have stood by and let anyone call fallen Marines losers?”

I’m not saying it was a hit job, but Mafia Times gave the story a five-bullet-out-of-five review.

However, for sake of argument, let’s say it’s true. And somebody is again revealing the private conversations of the President of the United States … for political and perhaps financial gain.

Why now? Why bring up something from two years ago now? If these people were so offended why didn’t they quit and stand on the White House lawn telling the world why? Because now it’s an election year. There are those who would gladly stomp on the graves of our World War I fallen to push Trump out.

You know what else happened the day the story went viral? Early voting began in North Carolina, a swing state with a heavy military population.

The goal of The Atlantic story is to corrode the commander-in-chief’s support among the military. And not just in terms of votes in the election but after.

Remember a few weeks back Biden saying that the military might be needed to remove Trump from office? Now comes this story.

Speaking of waters, five boats of Trump supporters capsized during Saturday’s pro-Trump boat parade on Lake Travis in Texas. . Fortunately, it was smooth sailing for the boat flotillas from the Potomac to New Jersey to Arkansas to San Diego Bay. In blue California.

A Trump vaccine isn’t floating Kamala Harris’ boat.  She’s worried a COVID-19 vaccine ready by November will be a shot in the arm to Trump’s campaign.

Harris was asked by CNN’s State of the Union Sunday morning if she would take a vaccine, even one ready before election day.

“I would not trust Donald Trump,” she says. As if Trump’s going to show up on the White House lawn with a bottle of COVID Cure Elixir he mixed together in his basement. Harris says she’d need to hear from a “credible source” about a vaccine.

But even if NIH and CDC scientists give a thumbs up, she’s still not going to be believe scientists. She told CNN she believes Trump will push out a vaccine before election day and scientists who say it’s not ready will be “muzzled” and “suppressed.”

So remember how for six months we’ve been hearing we can’t get back to normal until there’s a vaccine? Harris is basically saying that even if there is a vaccine, it can’t be trusted because Trump helped make it happen.

Someday they’ll be a vaccine for TDS.

Looking downstream … a prediction: You will see some scientists and doctors — whether for political reasons, or just set in the very slow way of getting vaccines approved — dragged on CNN and MSNBC warning against any vaccine that’s ready before election day.

Oddly enough, while Harris wants to put the brakes on any vaccine ready to go before the election, her running mate Joe Biden tweeted that when he’s president he will “accelerate the development of treatments and vaccines.”

Meanwhile, Joe Biden’s Twitter also declared Saturday that “As president I will call for nationwide mask mandates.” On Sunday, Harris twice refused to commit to a mask mandate.

Wow.  For a new relationship, they don’t seem to be communicating that much.

Meanwhile, Joe Biden’s buddies in BLM tried rushing the stage at rally Saturday in Dallas organized by #WalkAway Campaign founder Brandon Straka. They would later chase Brandon and friends through the streets. Straka called it “the most terrifying moment of my life.” Local news stations were filming. But Dallas Morning News described it as … wait for it … “mostly peaceful.”

This was the most terrifying moment of my life. My team &I went to the police to check on detained security agent. 30-40 BLM began throwing bottles at us & chasing us. They stole my employee’s phone &smashed it. We had to run for 4-5 blocks. All Dallas news stations were there. pic.twitter.com/84ZWXtPo93

Last night in Rochester, video appears to show protestors "shutting down restaurants" by smashing tables and harassing patrons into leaving.pic.twitter.com/MfAE892Ih1

They also marched through New York City and Philly chanting “Death to America.”

Maybe BLM figures that if they sound like Iran, Joe will send THEM millions and millions in cash, as he did to the Islamic Republic. They’re probably right.