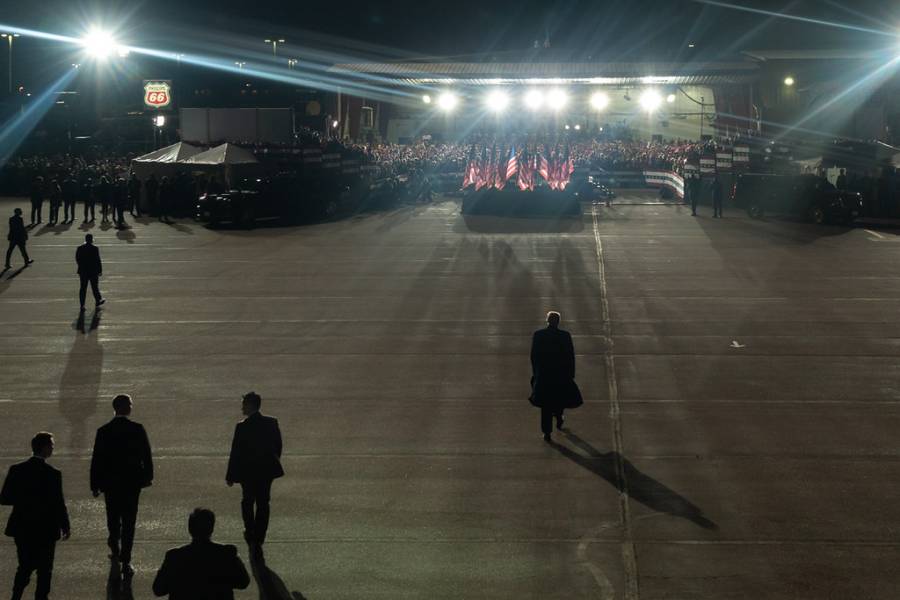 Just six weeks out from the election and Joe Biden was AWOL yesterday. His campaign announced a lid — meaning no public events or news from the campaign — at 9:22 am. Of the 22 days so far in September, Joe Biden’s campaign has called a full lid before noon eight times. And it’s not like he’s barnstorming the nation … or even barn-drizzling the nation … the rest of the time.

This is every day so far in the month of September that the Biden Campaign has called a full lid before Noon pic.twitter.com/dqdJlqdjMc

Sure, Joe’s doing occasional private fund raisers, but what else has he got to do? Watch The View? There are mummies in Egyptian museums not kept under wraps like Joe.

Quick question, undecided America: You’ve got two full-time interns vying for a job. One quits at noon. Disappears. The other doesn’t seem to sleep. Is sending you proposals and updates at 2 AM and starting up again at 6 AM. Who are you hiring?

Six Days Until the Debate

We think we know where Joe Biden will be next Tuesday. At his first presidential debate with Donald Trump at Case Western University in Ohio. In recent appearances, Trump’s been playing up Biden’s debate skills, saying “He’s actually quite good.” I would point out that this is the first time in four years, a Trump comment hasn’t been fact checked by the media.

The Presidential Debate Commission released the topics for the first debate:

No matter. We’re talking Donald Trump. Chris Wallace keeping to the list will be like a kid trying to keep a wave from breaking on his sandcastle with a tiny plastic shovel.

And we’re talking Joe Biden. Who knows where his mind will go: Record players, leg hair. Creative renderings of the Pledge of Allegiance? Because … you know, the thing.

President Trump will be at the National Catholic Prayer Breakfast Wednesday morning. This comes as Democrats gear up to attack Supreme Court Contender Amy Coney Barrett for her deep Catholic faith. Again.

Remember her earlier confirmation hearing. What Sen. Dianne Feinstein said was chilling. “The dogma lives loudly within you. And that’s a concern.”

That’s no young radical. Or a snarky Sen. Kamala Harris. That’s Dianne Feinstein, the formerly moderate Senator who’s been around since the Reformation.

Undecided America: Does it bother you the same party that’s keeping churches shut — while allowing rioting and gambling — seems to think one’s faith should keep them from public service?

If Barrett is the nominee it looks she is guaranteed to at least get a vote by the end of the year. Thanks to Mitt Romney. Yes. That Mitt Romney.

After feeling Democratic love all year for voting to impeach Trump, Romney is back to being hated by the left. He announced today that he’s okay with the Senate moving ahead on a Supreme Court nomination before the election. He also basically told Democrats “tough toe-nails.”

I recognize that we may have a Court which has more of a conservative bent than it has had over the last few decades, but my liberal friends have over many decades gotten used to the idea of having a liberal court and that’s not written in the stars.

Of course the stars are losing their minds. And CNN’s Don Lemon. Monday night, he declared “We’re going to have to blow up the entire system. Get rid of the electoral college, pack the courts.”

These poor sports don’t want to take their ball home. They want to stuff the ball with C4 and drop on Lady Liberty’s lap.

Why? Protecting the altar of abortion. This election is a fight for life. Fittingly, tomorrow starts the “40 Days for Life.” The theme? “The Power of One.”

It’s the Little Things and the Big Ten Things.

What makes for a winning campaign? The little things … and the Big Ten Things.

Outkick predicts Trump’s role in bringing football back can help him in three Big Ten swing states: Wisconsin, Michigan and Pennsylvania. In fact, the survey showed Trump’s intervention has gained him support with both Democrats and Independents. (Ah, but would there be an equal drop in support from football widows?)

Finally, Hillary Clinton is launching a podcast this month. According to People magazine, it’s going to be called “You and Me Both with Hillary Clinton.” The podcast actually would have launched a few months ago … but Hillary kept erasing the tapes. (Yes, we jest.)

Note: Keep close to The Stream for the latest on the election. Like Josh Shepherd’s look at the Values Voters Summit which kicked off last night.