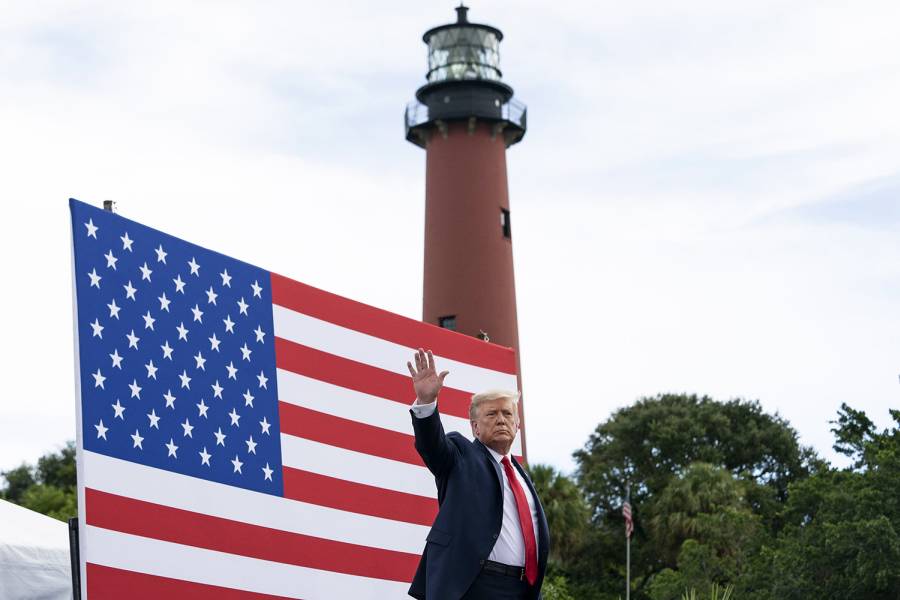 President Donald J. Trump waves at the conclusion of his remarks Tuesday, Sept. 8, 2020, at the Jupiter Inlet Lighthouse and Museum in Jupiter, Fla.

54 days to go until Election Day.

Yesterday was another frenzied day in Campaign Land.

“Blessed are the peacemakers, for they shall receive a boost for their campaign.”

President Donald Trump was nominated for the Nobel Peace Prize for brokering an historic peace treaty between Israel and the United Arab Emerites. That deal will be signed at the White House next Tuesday. The nomination was submitted by Christian Tybring-Gjedde, a member of the Norwegian Parliament and chairman of the NATO Parliamentary Assembly.

Curiously, though not expectedly, the Associated Press article on the Nobel prize nomination spent far more time on the Norwegian’s politics — described by AP as “far right” — than it did on Trump’s historic accomplishment.

Trump also announced a further reduction in troops in both Iraq and Afghanistan.

Excerpts from Bob Woodward’s new book Rage set the Swamp alight yesterday. Seems Trump told Woodward in a March interview that he publicly downplayed the potential severity of the COVID virus early on to avoid panic. Naturally, the media is going hysterical. Forgetting the media’s own massive effort to downplay the threat … before it became politically helpful to sell it as the end of life as we know it.

Joe Biden also jumped on the Trump statement like a Pee Wee league player on a fumble. He shamelessly declared that President Trump killed off Americans to protect rich people. Said Joe, “It’s all about making sure that the stock market did not come down and his rich friends didn’t lose money and that anything that happened had nothing to do with him.”

What’s the First Law of Snake News: Whatever has the media and democrats hyperventilating about Trump will be proven false, usually within 24 hours. In this case, the media is saying Trump lied to the American people. Yesterday, Anthony Fauci — St. Fauci to the media — declared he “didn’t get any sense” that Trump was “distorting anything” about coronavirus.

One more thing about the Woodward “bombshell.” If Woodward actually thought that Trump’s effort to ease panic over the virus was wrong, was endangering the public, why didn’t he say something six months ago? His answer is that he was waiting to confirm sources. Which makes no sense, since he had Trump’s actual words on tape.

While we’re talking COVID, Trump hanger rallies scheduled for Nevada this weekend had to be cancelled because of the Democratic governor’s COVID restrictions. Trump’s going to Nevada anyway, the White House says.

The White House is finally playing the game. When asked about Trump’s campaign rally in North Carolina, which apparently violated the state’s current mandate to limit outdoor gatherings to 50 people, White House press secretary Kayleigh McEnany declared: “People have a First Amendment right if they so choose to show up and express their political opinion in the form of a peaceful protest, which is what the president has held, and there is a real double standard here.”

Translation: “Until you complain about BLM and Antifa protests, we don’t want to hear a thing about our rallies.”

Joe Biden went to Michigan for a campaign event yesterday. Michigan’s Democratic governor Gretchen Whitmer was fine with it. No COVID problems with Joe. However, she found a similar Trump campaign event “very distressing.”

Biden did a fabulous Trump impression in Michigan. At least on policy. At his “Made in America” event, Biden promised to change the tax code to discourage moving jobs overseas and to reward companies for investing in domestic production. This after he spent half a century doing the opposite. Think NAFTA, TTP, Biden’s backing of China joining the World Trade Organization.

The Trump team was also quick to remind voters the last time Biden was in Michigan he lit into an auto worker who was pressing him. “You’re full of s***,” Biden said, “I don’t work for you.”

The last time Joe Biden was in Michigan, he yelled at an autoworker.

"You're full of sh*t," Biden said angrily. "I don't work for you."pic.twitter.com/OSBs0kMpZy

Then who do you work for, Joe? The Chinese? Check out this story from John Solomon’s Just the News. Headline: “Hunter Biden teamed with Chinese military supplier to acquire dual-use Michigan auto parts maker.”

Biden’s investment fund BHR co-purchased Henniges Automotive with Chinese military contractor AVIC, which has been identified as front for China’s military and was sanctioned before the Obama administration approved the Biden-connected sale.

Joe left that out of his speech in Michigan. Next time, maybe the hard working people of Michigan should put $1.5 billion in Hunter Biden’s pocket, if they want to keep their companies here.

So who’s ahead, Joe Biden or Donald Trump? A new Rasmussen study suggests we can take the current polling with a grain of salt. They found that some 17% of likely voters who Strongly Approve of President Trump — or nearly one in five — are less likely to tell people how they’re going to vote.

Notice how we’re not seeing Kamala Harris out doing all too many campaign events? Biden’s team says it’s because of COVID concerns. But is that being generous? Peter Schweizer points out the obvious. He told Breitbart, “If Joe Biden is not out there on the campaign trail and Kamala Harris is, it highlights the fact that they don’t have a policy about campaigning [regarding COVID-19]. It’s just they don’t want Joe Biden out on the campaign trail.”

Schweizer also cites another possible reason Harris isn’t out there in public much. Moderate voters don’t find her all that that likable or sincere.

Perhaps that’s why Kamala Harris did a cozy webchat with Barack Obama for Biden’s campaign website. To try and look likable. The two joked about Biden’s fondness for aviator glasses and ice cream.

Obama did get serious, saying “The main thing we know about Joe is that Joe has never lost his sense of why we do this.” Sure, he may lose sense of what state he’s in, what decade he’s in and which woman on the stage with him is his wife … but not why we do this.

We also learned that Kamala works out every morning “regardless of how much sleep I had.” Good. Maybe that’s a question for Kamala when she does get around to taking questions. “Forget COVID-19, how do we get rid of the COVID-20? Those extra pounds so many of us have put on during the shutdown.”

And finally, after 20 seasons Keeping Up With the Kardashians is coming to an end. This has nothing to do with the election, but given how rotten 2020 has been, we can use all the bright news we can get.