The Long Goodbye: The Kara Tippetts Story will be released on March 22. 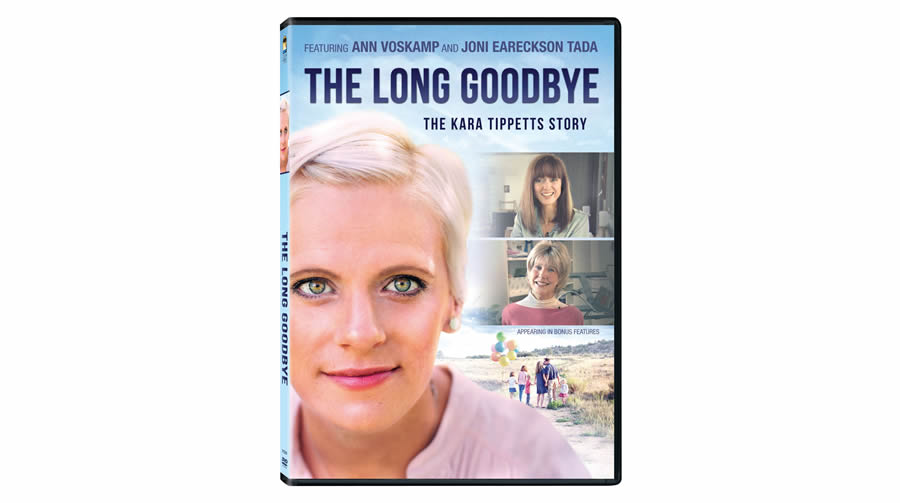 “Cancer was this gift that exposed us to what is important and what’s valuable — parenting with kindness, loving your husband, living well.” Kara Tippetts, 38-year-old wife and mother of four small children, was dying. She’d been diagnosed with stage 4 breast cancer. Filmmakers Jay and Sofia Lyons documented what turned out to be Kara’s last few months. The documentary, called The Long Goodbye: The Kara Tippetts Story, will be released on March 22, the fourth anniversary of Kara’s passing.

Kara, a blogger with a site called “Mundane Faithfulness,” was thrust into the public eye after she wrote an open letter to Brittany Maynard, a young woman who had a diagnosis of brain cancer. Brittany and her family moved to Oregon so she could take advantage of the euthanasia law there. Kara pleaded with Brittany not to end her life, but to walk through the suffering knowing that each day was precious. Brittany chose to end her life anyway. Kara showed the world, through her life, her blog and her books, that there is grace and beauty in dying.

Jay and Sofia met Kara and her husband, Jason, through a mutual Facebook friend. The two couples Skyped about documenting Kara’s story. From the beginning, Kara was open about the terminal cancer. “That was always part of her story,” said Jay. “It was never hidden, she never danced around it. She was just like, ‘that’s who I am.'” Looking at Kara on the Skype call, no one would ever know she was dying. “She had so much passion, she had so much life in her eyes, so much energy and light,” said Sofia. “I remember hanging up with that [Skype] interview thinking, ‘she’s not going to die.'”

Over the next few months, the couple filmed Kara and her family to make a brief documentary. But God had different plans. “God just kept showing up and saying, ‘Okay, I want you to do this other thing,'” Sofia explained. “It’s kind of like God led us down the path with little breadcrumbs. It was one step at a time.” Jay felt the same way. “I feel like God wanted this story to be told, in a divine way that it needed to be told. It was an important story that was a missing voice in the world about suffering and dying.”

The film documents not only Kara’s and her family’s story of walking through cancer, it also shows Kara’s very personal suffering and dying with grace. Suffering, for Kara, wasn’t something to avoid. “Suffering isn’t a mistake and it isn’t the absence of God’s goodness, because He’s present in the pain.” Not only is He present in the pain, but true joy “is felt when we walk through deep pain.” Kara’s strength and joy came from Jesus and she wanted those who walked with her on her journey of dying to know.

As cancer finds new corners everyday in my body, I realize that’s all it got. Jesus is all I’ve got. And not only is He all I have, He’s all I have to give. So that’s my question to you. How today, how today can you move past your own comfort, your own expectation of what today is to be or this week is to be and let Jesus love you enough so that love spills onto somebody else?

She exuded grace. “Obviously, from a Christian standpoint, it’s the grace that we have through our faith, but Kara gave people grace in her life,” explained Jay. “She gave grace to us, just as her friends she had just met. She was very warm and welcoming, she was making jokes.”

Kara’s life was about loving others and pointing the way to Jesus. “She truly loved people. You feel that in the movie,” said Jay. She had a deep longing for Jesus. “That took precedence over everything,” said Sofia. “As believers, we say that we think that way, but to actually live that out on an everyday basis and write about that and want to be close to Jesus but also want to bring people and draw people to Him — that was what Kara was all about.”

Kara loved surrounding herself with her friends, new and old. “She just did community so well. I have learned so much about watching her just open her house.” Sofia noted that her house didn’t have to be perfect. She didn’t have to have the best meal on the table. “She just kept her doors open. There was such a sense of community that she created with her church members, her neighbors. She was very hospitable and that is something that I think a lot of people who watch this film will take away. The sense of community.”

Emotions were raw throughout the full-length film. For the most part, she was strong and supportive, allowing those around her to grieve over her. But a few times she broke down. “I think I’m afraid — I think I’m most afraid of my absence.” Tears flowed down her cheeks. “I feel like I’m a little girl at a party whose dad’s asking her to leave early. And I’m throwing a fit. I’m not afraid of dying. I just don’t want to go.”

There were tender moments between Kara and her young children, like the time when her son crawled up in bed with her. “I don’t want you to go,” he said, arms wrapped around his mom. “I know,” she said softly. “I know.” She pointed to her chin. “You want to give me a big smooch here?”

Every Day is a Gift

Just being around Kara during her last days affected both Sofia and Jay. Sofia has always struggled with a fear of death. “What’s changed for me was watching Kara navigate dying with such grace and courage. … watching Kara be so brave and toward the end, excited about heaven. It was sort of like watching someone with one foot in the world and one foot already in heaven. She changed my view of death.”

Watching the film will change people. “I think people can learn — the obvious — that you are going to die and be faced with eternity,” said Jay. “That’s something that Kara wanted to tell everyone. She wanted to point others to Christ through her life’s message, but also that your time is a gift. Every day that you have is a gift.”

Kara Tippetts went to be with the Lord March 22, 2015. The documentary The Long Goodbye: The Kara Tippetts Story will be available on DVD and digital formats March 22, the fourth anniversary of her passing.