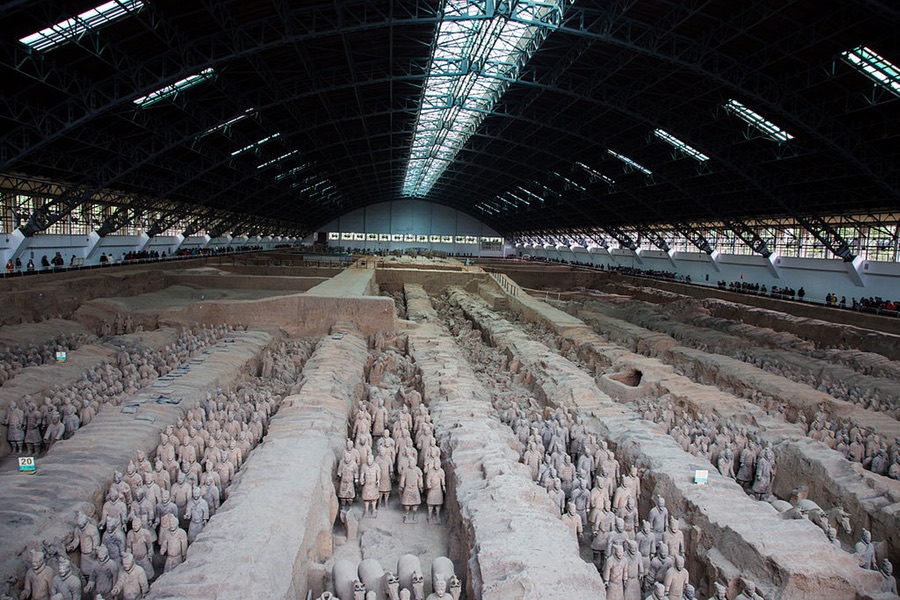 Emperor Qin Shi Huang's misguided quest for immortality continued even in his tomb, guarded against "evil spirits" by thousands of life-size terra cotta soldiers. The mausoleum, unearthed in 1974, has become one of China's most-visited tourist locations.

DANTE WITT — Some twenty-two centuries ago Qin Shi Huang, the first emperor of China (259-210 B.C.), grew obsessed with the quest for immortality. He had reached the top of the world and, finding it empty of satisfaction, asked himself what might be above it. He sent out ships to explore the seas in hopes of discovering the island of immortal life. His court studied alchemy, and his servants offered him many elixirs. He drank all of them, in the hope that one of them might free him from the curse of mortality.

As his quest continued without success, he grew more and more ruthless and burned those scholars who did not occupy themselves with his obsession. He burned books, too, in order to prevent his subjects from studying “useless” knowledge that could only distract them from helping him fulfill his ambition: to become like a god.

One day, some of his doctors and alchemists proposed a solution: The emperor should take mercury; then he would never die. (He would never bother them with his quest again, at any rate.) The king did, and the king died.

The longing for immortal life on our own terms is not rare. We wish ourselves to “be as gods,” as the Serpent promised Eve in the Garden. “Ye shall not die” he said, but live forever, “knowing good from evil.” (Genesis 3:1-5) The curse laid upon the Serpent was fitting: to crawl the ground like a worm, unable (we presume) to properly see the sky. (Genesis 3:14-15)

And neither could the emperor. His life was spent in the impractical quest for immortality; his terror of death (reported by his contemporaries) was equaled by his ambition and by his fear of the spiritual realm. He did not enjoy his life, nor could he prepare for his death, because he loved his own life so.

“For whoever would save his life will lose it, and whoever loses his life for my sake will find it,” said Jesus (Matthew 16:25), and many have found his words to be true.

“I am no longer anxious about anything, as I realize that He is able to carry out His will for me,” said Hudson Taylor, the great missionary to China. “It does not matter where He places me, or how. That is for Him to consider, not me, for in the easiest positions He will give me grace, and in the most difficult ones His grace is sufficient.”

As Taylor was dying, his heart so utterly unlike the selfish, childishly terrified emperor’s, he said, “I am so weak. I can’t read my Bible. I can’t even pray. I can only lie still in God’s arms like a little child and trust.”

For I know that my Redeemer lives,
and at last he will stand upon the earth
and after my skin has been thus destroyed,
then from my flesh I shall see God,
whom I shall see on my side,
and my eyes shall behold, and not another.
My heart faints within me!