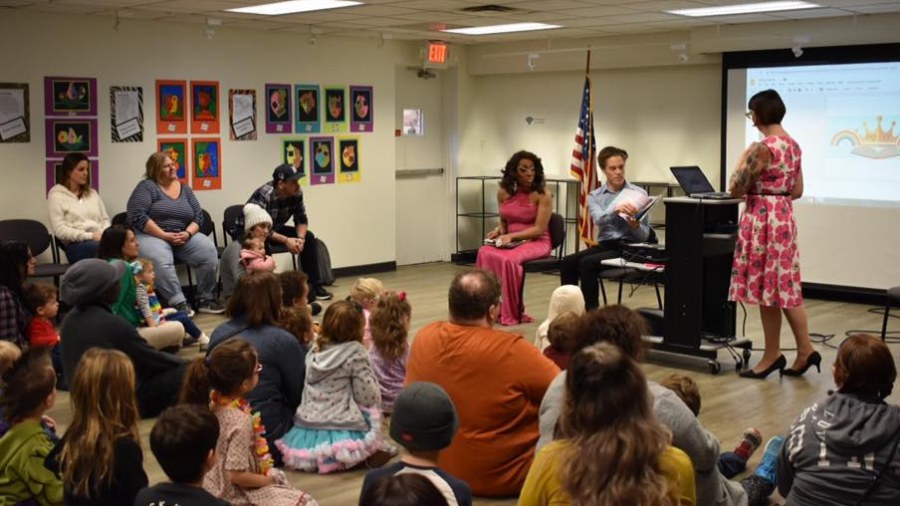 In this photo, posted to the Huntington Woods Library Facebook page on Feb. 5, 2019, young children listen during a Drag Queen Story Hour.

The title of the article in The Washington Post read, “In Michigan, story time with drag queens brings hugs and controversy.” Reporter Trevor Bach went on to tell about two dozen children who gathered at a public library in Huntington Woods, Michigan, to see a man in make-up and a cocktail dress read The Night Before Christmas.

According to the article, variations of “Drag Queen Story Hour” (or DQSH for short) are popping up in communities across the country. But why?

Those who promote DQSH admit to having political motivations. Joyce Krom, the public librarian who started the program in Huntington Woods, said she sought a program that “offered a rebuke to the kind of bigotry and meanness they associated with the new president.”

In this day and age, we can’t hide from our kids that some people “present as they wish.” But woe to us if we teach them to regard what is false as authentic.

The article describes the events as aiming to “teach children gender diversity and acceptance.” The DQSH website states that it “captures the imagination and play of the gender fluidity of childhood and gives kids glamorous, positive and unabashedly queer role models. In spaces like this, kids are able to see people who defy rigid gender restrictions and imagine a world where people can present as they wish, where dress up is real.”

There are many kinds of people in the world. We should teach kids that every human being is created in the image of God, with inherent value and dignity. We should teach kids to treat all people with kindness and grace. But that is far different from teaching them that every choice or lifestyle is equally good, or that admiration and esteem should be conferred upon all people equally.

We can’t hide from our kids that some people “present as they wish.” But woe to us if we teach them to regard what is false as authentic, or to deem something admirable solely because it is strange. Dressing up like a princess does not make a man a civil rights hero, a visionary or a role model. When we try to teach kids otherwise, we lower their standards and cheapen their respect.

The DQSH wants to build on what they refer to as “the gender fluidity of childhood.” One assumes they refer to the fact that sometimes little boys play with things that little girls like, and vice versa. But to label such play as “gender fluidity” is a desperate effort to project the gender-fluid worldview onto our kids.

A child who dresses up as the other sex is no more “gender fluid” than an actor playing the role of the opposite sex on stage. Neither the child nor the actor believes himself to actually be the other sex. Neither wishes to compel others to pretend he is the other sex after the performance. They are simply playing, or acting.

Our Culture’s Dogma: Blind to Truth

So what is DQSH is really trying to achieve by teaching children that “dress up is real?” I think it’s just another forum for pushing our culture’s newest dogma.

In his thoughtful book, The Closing of the American Mind, Allan Bloom described how modern American culture is bent upon producing people who are indiscriminately “open.” We’ve stopped training them to discern the good from the bad, to pursue the one and reject the other.

We need to train our kids to be more discriminating; not less. To search for truth and virtue.

Instead, today we train them to be blind to virtue; blind to truth. We teach them that what matters above all else is their indifference to right and wrong and their acceptance of all behaviors and attitudes, regardless of merit.

As Bloom points out, the only way this can be done is by suppressing both instinct and intellect through a twisted “education.” The goal is to replace the natural soul with an artificial one.

What Our Kids Really Need

Do we really want to live in a world where mankind’s natural quest for truth — our natural tendency to honor sacrifice, and compassion, and duty, and courage, and faithfulness — are suppressed by social engineers?

“Drag Queen Story Hour” may be on the rise, but let us never get used to it. Let’s teach our kids to look beyond costumes and makeup; to reserve their esteem for what is truly worthy.