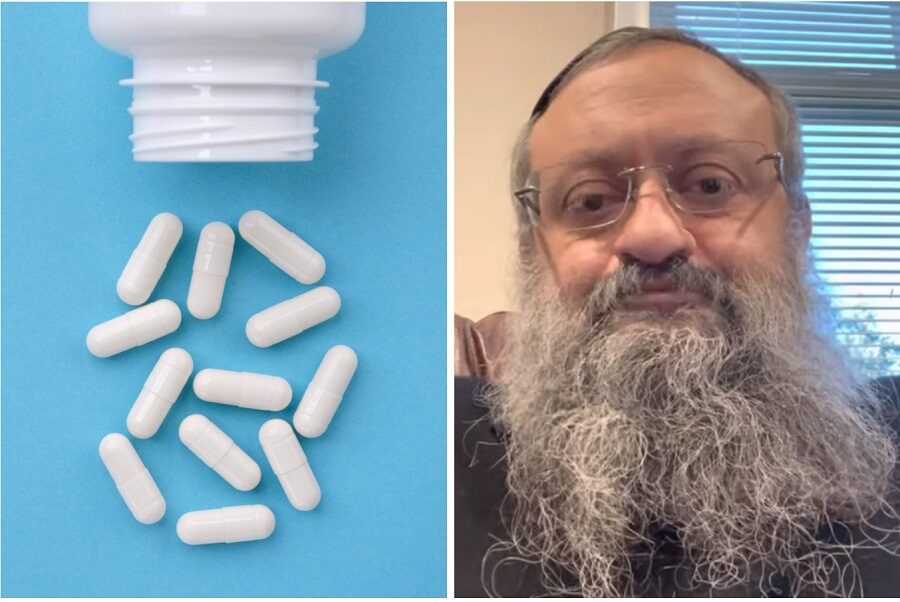 Dr. Vladimir Zelenko minced no words in his uncompromising testimony before an Israeli rabbinical court regarding the origins of COVID-19, his stance against mass vaccinations, frustration over suppressed prophylactic treatments, and the “collision of two systems that cannot co-exist.” His cascade of information came on August 5th via a 30-minute teleconference call with members of the Ma’aleah Adumim Rabbinic Court in Israel.

It’s plausible that the council was reminded of his warnings when, just shy of a week later, Israel’s breakthrough COVID-19 vaccine cases exceeded 50% of the total reported cases for one day on August 11, 2021. This shouldn’t happen in the country that conducted the fastest campaign to vaccinate its population against the virus. As of the first week of August, 67% of Israel’s population had received at least one dose of the vaccine, while 62% were fully vaccinated. And, now, the most at-risk populations were lining up for their third shot in less than a year.

There’s a good chance Zelenko wouldn’t have vaccinated anyone, given the confidence he had in other safe and proven treatments to mitigate the severity of the disease. A board-certified family physician for over twenty years, the Ukrainian-American doctor is now widely known for developing “The Zelenko Protocol,” which includes zinc combined with low-dose hydroxychloroquine and azithromycin. In a peer-reviewed and published retrospective study, the treatment was shown to be an effective and therapeutic approach to COVID-19 that reduced hospitalization and mortality rates.

According to Zelenko, he has directly treated over 6,000 patients including President Trump, Rudy Giuliani and the president of Brazil, Jair Bolsonaro, all of whom contacted him for care. “My experience has given me a very unique perspective in approaching COVID-19 which is basically keeping people out of the hospital.” By treating people early enough, Zelenko claims his data shows a reduction of the death rate of at-risk populations by 85% — from a 7.5% death rate to .5%. “Out of 600,000, we could have prevented 510,000 of them from going to hospital and dying.”

To Vax or Not to Vax: Answer Dr. Zelenko’s Three-Question Test

As many Americans still grapple with whether to get the vaccine, Dr. Zelenko offers a practical three-question test to help. “Anytime you evaluate any therapeutic, you need to evaluate it from three perspectives: Is it safe? Does it work? Do you need it?” Just because you have a capability doesn’t mean you have to use it. There has to be a medical necessity, there has to be a need,” he said.

According to Zelenko, there are three phases of determining whether or not the vaccine is safe or not: acute, sub-acute, and long-term. Zelenko raises concerns in all phases. As one example, in the acute phase, myocarditis and pericarditis have been reported within the first week after receiving the vaccine. This report is confirmed by the CDC which states that, “As of August 6, 2021, VAERS has received 1,253 reports of myocarditis or pericarditis among people ages 30 and younger who received COVID-19 vaccine. Most cases have been reported after mRNA COVID-19 vaccination (Pfizer-BioNTech or Moderna), particularly in male adolescents and young adults.” After 351 million doses administered in the U.S., the CDC considers this rare and even acceptable; it appears that Zelenko does not.

In the sub-acute phase, Zelenko is very concerned about Antibody Dependent Enhancement (ADE), pathogenic priming, and paradoxical immune enhancement. In short, ADE occurs when the antibodies made during an immune response recognize and bind to a pathogen, but they are unable to prevent infection. Instead, these antibodies act as a “Trojan horse,” allowing the pathogen to get into cells and exacerbate the immune response. Risk of ADE, caused by the vaccine and exacerbated by the Delta variant, has not been ruled out. Zelenko then says, “Why would I vaccinate someone … without ruling that out first?”

In the third phase, the long-term effects from taking the COVID vaccines are undetermined. Zelenko cites concerns over the vaccine’s long-term effects on fertility (both male and female), increased auto-immune diseases and risks of cancer –– all of which need more time and more study to produce definitive answers.

Dr. Zelenko is not a fan of the current vaccines being offered in United States and Israel. Although initial studies show that overall vaccine efficacy ranges from 72% for Johnson and Johnson to over 90% for Pfizer and Moderna, that number is quickly waning in the presence of the Delta variant. According to the latest research, the ranges seem to be now 42% for Pfizer and 76% for Moderna.

Zelenko is quick to point out that two highly-vaxxed countries, Israel and the island nation of Seychelles, are both experiencing Delta variant outbreaks among the vaccinated. “If you vaccinated the majority of your population,” Zelenko asks, “why are you still having an outbreak? Why would you give a third shot of the same stuff that didn’t work the first two times?”

Is It Necessary? (Or are Natural Antibodies Better?)

In his address, Zelenko zeroed in on one demographic to answer the “is it necessary” question: children. According to Zelenko, the survival rate for children under the age of 18 is 99.989% for COVID. He says flu death rate is higher in children. Even young adults 18-25 have a 99.95% chance of getting better. With survival rates that high, Zelenko is a staunch advocate for not vaccinating children.

“Someone who has already had COVID and has naturally-induced immunity does not need the vaccine and is better off than someone who took the vaccine,” he argues. A study published on the National Institute of Health’s website backs him up: lasting immunity was found up to eight months after recovering from COVID-19. “Several months ago, our studies showed that natural infection induced a strong response, and this study now shows that the responses last,” said Dr. Daniela Westkopf, one of the researchers on the study. “We are hopeful that a similar pattern of responses lasting over time will also emerge for the vaccine-induced responses.”

To this point, an article published in July in the Israel National News showed that the latest data indicated that vaccinated Israelis were 6.72 times more likely to get re-infected after the shot than after natural infection in the latest wave.

“A Collision of Two Systems That Cannot Co-Exist”

About halfway through the teleconference, Zelenko, an Orthodox Jew, began to speak to the rabbinical council as Orthodox Jews — bringing to bear their shared adherence to the Law of Moses, and alluding to the first of the Ten Commandments: “You shall have no other gods before Me.” (Exodus 20:3) He said:

Taking an unapologetic stance on a hotly-debated topic, Zelenko believes that COVID-19 originated in a lab and was the product of twenty years of research. He warned that there is actually, “a war against God” and a “collision of two systems that cannot co-exist” taking place, pitting those who believe that humans are made in the image of God, with each life holding sanctity and value, against a Darwinian worldview that says, “‘Who’s on top of the dominant hierarchy of life? Those who have the biggest survival benefit.‘”

He concluded by imploring the council to make the psychological transition from “slavery to redemptive-thinking.” A thinking that esteems God. A thinking that doesn’t exchange God-given freedoms for the promise of man-made safety. A thinking that believes God can do what man cannot. He will once again part the waters in face of danger and take us safely to the other side.