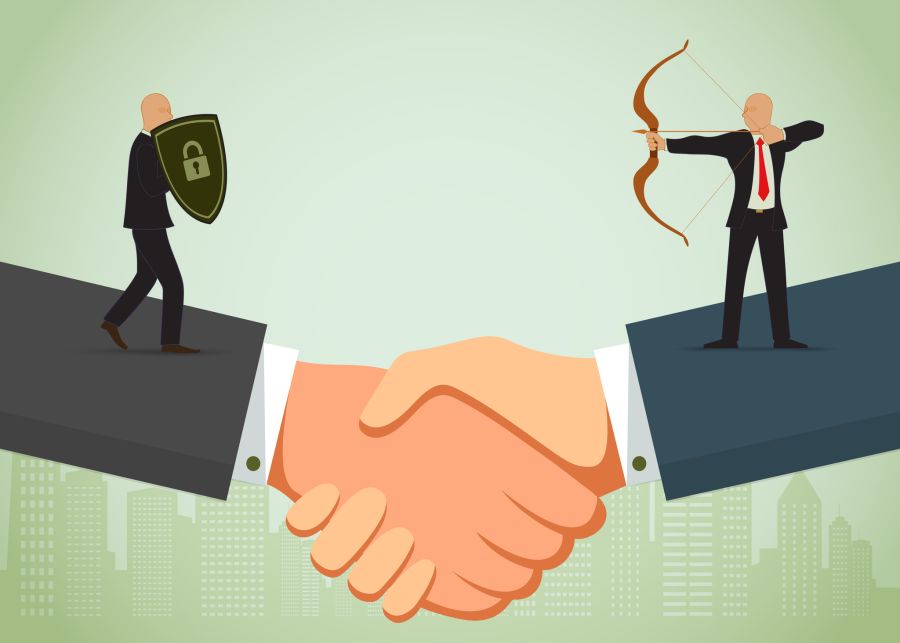 “Above all, taking the shield of faith with which you will be able to quench the fiery darts of the wicked one.” Ephesians 6:16

Many years ago, I was away from home and travelling on a ministry trip when I received a distressed call from my wife, “The head of the ministry is trying to reach you and he said it was urgent. He did not tell me what it was about, but I can tell something is very wrong. Call him as soon as you can.”

Her voice revealed the discomfort she felt in her soul. Before I made any calls, I decided to take a time of prayer and seek God to hear His heart.

As I prayed, I entered into a deep realm in the Spirit. I was totally awake and focused on beseeching God for understanding as I sensed a storm coming. Suddenly, I saw a vision unfolding before me. A senior leader sat alone at a table in a hazy room under a bright light. On the table before him was a flaming dart-like arrow, about 18 inches long, mounted on a pedestal. As he stared at it, I could sense his thoughts and the struggle that was in him.

He was known for his prominence and godly leadership. The dart represented a troubling decision, a posture to take, something that came from a bad source that would precipitate the unleashing of destructive consequences. He knew somehow that embracing the fiery arrow was wrong, but he had a sense of duty, vows he had made, allegiances from the past, and he had to be faithful to them.

As I stared at this strange vision, mesmerized by its intensity, a shocking scene took place. The leader grabbed the arrow with his right hand, stared at it with resolve and then opened his mouth and swallowed it. I was aghast! This important Christian leader did not get hit by a fiery dart of the devil … he willfully swallowed it! The accuser of the brethren and spirit of division was let loose from the top of the house and then worked its way into every room.

From Friends to Fiends: (Take out the “R” of relationship from “friends” and this is what you are left with.)

I have, unfortunately, seen this same thing happen several times over the years. Once the dart is “swallowed,” trust turns into distrust, evil suspicions, taking sides, secret meetings, and gossip factions go into acceleration mode. People who were once like family and great friends are suddenly viewed and treated like enemies. Men and women who were considered godly and essential now need to be removed. All their past and current motivations and actions are suspect as evil intentioned (see 1 Timothy 6:4). They are caricatured as monsters. Those who just moments-earlier were friends are now fiends.

Imperfections that we all have, which were tolerated in the past, become glaring flaws. The new faultfinding mentality buries all the good that was ever done by the once-upon-a-time dear companion. Emotions become raw and thinking on good things becomes almost impossible. Prayers becomes self-serving, as in, “Lord, open the eyes of those blind troublemakers.” The spirit of division begins to tear up the house (see Matthew 12:25).

The situation above goes from bad to worse, and I have seen it repeat itself many times over.

Then comes the secret gossip that no one dares verify (see Proverbs 16:28; 17:9; 18:8). He said. She said. I heard. It’s all about justifying the case for the side that you chose to align with. (It’s really slander and unchecked character assassination.) Distorted information is everywhere. People are nibbling on the dart that someone else swallowed. And, of course, no one blows the whistle and proclaims the sin and iniquity of what has now become the vigilante burial team.

A well-known proverb states, “The Church is the only organization that buries its wounded.” This ought not to be said of the Bride of Christ. Isn’t the Church’s mission like our Savior’s – redemption, mercy, forgiveness, a second chance, truth and grace?

Things get even worse when we add in denominational politics. Along with the spirit of division seven more demons now enter: abusive control, manipulation, man pleasing, misplaced vows, intimidation, political favors, and severing communications. What was once a family now becomes an institutional prison system. “Either you play by our rules or you get punished and cast out.” The fiery dart is spreading its destroying flame.

And when it’s shepherd against shepherd, this scripture pro ves all too relevant: “Strike the shepherd and the sheep will be scattered” (Zechariah 13:7). The poor sheep are confused, separated and get picked off by wolves. There are many casualties, ministries sometimes end, and the collateral damage to families, youth and children is immeasurable over the years.

The devil is laughing over how easy it was to divide and weaken the Church again.

Are You Pursuing Peace?

Beloved, it is time to look at Scripture again. Does not mercy triumph over judgment? (See James 2:13.) Can we not call in objective mediators? Where is the attitude of humility and reconciliation? “Pursue peace with all people, and holiness without which no one will see the Lord.” And if you have bitterness, check your own heart and repent before others are defiled (Hebrews 12:14-15). There is a place for correction, but it must come from the Father’s heart, not the anger of man, nor the spirit of division.

A Word of Wisdom

Jesus prayed for us to be one in John 17, as he and the Father are one. Paul, Peter, and John wrote apostolic letters to encourage working towards oneness as we pursue maturity and love (Ephesians 4:3). Social distancing does not work to heal the Church.

Don’t be surprised if the Prince of Peace suddenly reveals a solution that heals and brings glory to the Father.

A personal note: The power of prayer is paramount. “praying with all prayer and supplication in the Spirit … for all the saints” (Ephesians 6:18). Abraham built altars, Moses interceded, Elijah called on God, Esther fasted, and Jesus prayed through the night.

Join me in praying and working towards unity in the Spirit to overcome division in His Church. This stronghold must fall in Jesus’ name.

Dr. M. John Cava is director of the World Outreach Center, Fort Mill, SC and author of The Church in His Image: Unveiling God’s Secret Weapon.

The Fourth, Fireworks and Friendship