Don’t Make a Martyr Out of Rep. Brian Sims 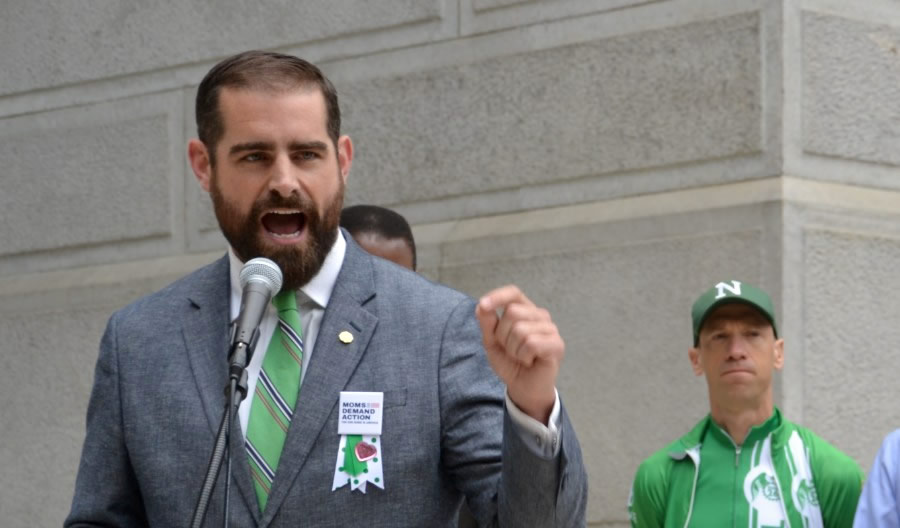 In this May 6, 2017, file photo, Democratic Pennsylvania state Rep. Brian Sims speaks at an anti-gun violence event in Philadelphia.

Most times people use the phrase “martyr” figuratively. Of some people we say that they have a “martyr complex,” since they never seem happier than when they can play the victim. A friend of mine’s mother proved so good at this, he used to tell her, “Climb down off the cross, mom. The world’s already been redeemed.” (Okay, I lied. That was my mother, and I’m the one who said it.)

I don’t mean “martyr” figuratively here. I mean this: Please, for the love of God, America, and every conservative cause…. Nobody commit any act of violence against Pennsylvania Rep. Brian Sims. I’ll explain why further down. (Beyond the obvious Christian moral arguments, which likely wouldn’t restrain the kind of person I’m worried about.)

A Thug, Packed Into a Suit

Yes, Sims is a gym rat, jacked up, bearded ex-football captain who’s now a gay activist terrorizing women and kids for peaceful pro-life speech. Yes, he struts around like a bantam cock, using physical intimidation against the weak, for the sake of killing mostly black babies. Then pretends to be an advocate for the “vulnerable.” (As if the rich, powerful, aggressive LGBT lobby were anything but part of America’s ruling elite.) Yes, he goes to companies like Microsoft as a paid consultant, apparently in violation of campaign finance rules, to tell them how to better shove the gay agenda down our digital throats.

Brian Sims is the kind of gay man who joined the Nazi S.A., for the chance to dress up in brown shirts and gang up on their enemies in the streets.

He waves the middle finger at our mild, unassuming Vice President, just for being a Christian. He tried to ferret out and make public the home addresses of pro-life teenagers, to expose them to political violence. Brian Sims is the kind of gay man who joined the Nazi S.A., for the chance to dress up in brown shirts and gang up on their enemies in the streets.

In his fake apology for terrorizing old women and kids, Sims blamed the victims. (See below.)

I will fiercely protect a woman’s right to make the best choices for her health & her body, unimpeded. I also know that two wrongs don’t make a right, especially on the front lines of a civil rights battle. I can do better, and I will do better, for the women of Pennsylvania. pic.twitter.com/jURL1UX9qE

When an old woman prays in the street or a teenager joins a peaceful political protest, what’s wrong about that? Sims’ answer is “wrongthink.” The causes they favor are wrong, in his view. So they’ve no right to express them. Sims has appointed himself Pennsylvania’s Grand Inquisitor, and error has no rights.

The Kind of Man Who Volunteered for Prison Camp Duty

Make no mistake, wherever the left comes to power, men like Sims will be advocating ever harsher restrictions on pro-life speech and Christian practice. He’s blazing a trail, though, pushing a boundary. At first the Nazis and Communists made a point of assaulting other men. Having street fights with fellow activists, going mano a mano in furtherance of their respective hellish creeds. Some of them would quail at openly beating up women and children. Some lingering residue of chivalry, Christian ethics, and bourgeois decency restrained them. That outraged their ideological masters, who saw (correctly) that there’s no room for such “sentimentality” in the furtherance of Utopia.

So we see telegrams from Lenin, private speeches by Himmler, reprimanding their subordinates for permitting such “weakness” and “softness.” The grim logic of evil can tolerate no boundaries. And sure enough, pretty soon the Bolsheviks and Nazis were first grimly, then gleefully, swinging truncheons at children. Dragging women off by their hair. Murdering toddlers by the school busful, on the logic that “nits make lice.”

What Possesses Sims? Its Name Is Legion

The same demons that drove them drive Brian Sims. Again, I’m speaking not figuratively but literally. Unless he’s a eugenicist or white supremacist, there is no rational reason why a white male homosexual should be so eager to make sure that black women kill their babies. Abortion access affects his sterile, private proclivities not one whit. No matter how many times he and his partner engage in the “sin that cries out to heaven for vengeance,” it won’t produce a child he’ll need to kill for convenience. He’s off the hook.

Yet he hates, how he hates, the women and kids who rally for Life. He cannot even climb down, not a single inch, from that. It goads and grips and drives him. This is the kind of man, who, given a chance, would flatten them with truncheons, march them onto trucks, and drive them off to camps. It’s the kind of man the left wants to put into power, in 50 states.

Remember the Mark of Cain

And that (beyond the moral reasons) is precisely why nobody should touch him. Don’t lay the lightest finger on his exquisitely oiled beard. No pelting him with eggs. Don’t vandalize his house or send him threatening letters. All of those things play into the left’s master strategy, which is to bask in luxuriant victimhood.

Remember the national lynch mob that gathered in just a few hours because a pro-life boy might have smirked at “Native American elder”? Multiply that by a thousand, if anything actually happened to Brian Sims. (I wouldn’t put it past him to pull a Jussie Smollett, by the way, and fake something.)

Does He Want to Be a “Martyr?”

And I think it’s what Sims really wants. The man’s so consumed with hatred, he likely hates himself. And nothing would suit his twisted psyche better than for someone to try violence. If it failed, he’d become a hero. If it succeeded, he’d be a newly minted martyr, and someday have a U.S. Navy ship or National Park named for him. His nasty, ugly provocations? Forever forgotten. We would carve his name in marble as a “victim of anti-gay violence.” Then the law that yanked the tax exemptions of faithful churches or closed down crisis pregnancy centers would be called the “Brian Sims Act.”

Remember Horst Wessel. He was a Nazi street thug, who joined the rest of his brown-shirted ilk in beating up Jews and Catholics, socialists and Communists indiscriminately. But he who lives by the truncheon sometimes dies by the truncheon. And Wessel died in a riot. Yesterday’s totalitarians made a martyr of the man, and named their Party song for him. He found himself “immortalized.” Nazi SS guards would be inducted for duty guarding death camps in a rite that used a flag drenched in Wessel’s blood.

The same demons that drove them drive Sims. They love such pagan fetishes.

Denounce Sims, urge his expulsion from the Pennsylvania legislature, use his thuggish video in campaign ads, and pray for his conversion. Hold Sims in the contempt he has so richly earned, and point to him when you train boys not to be bullies.

But for the love of all that’s holy, let no one “cross the line,” and play into the hands of today’s brownshirts. It would be not just a crime, but a blunder.

Why the Racist Right, Alas, Has a Future