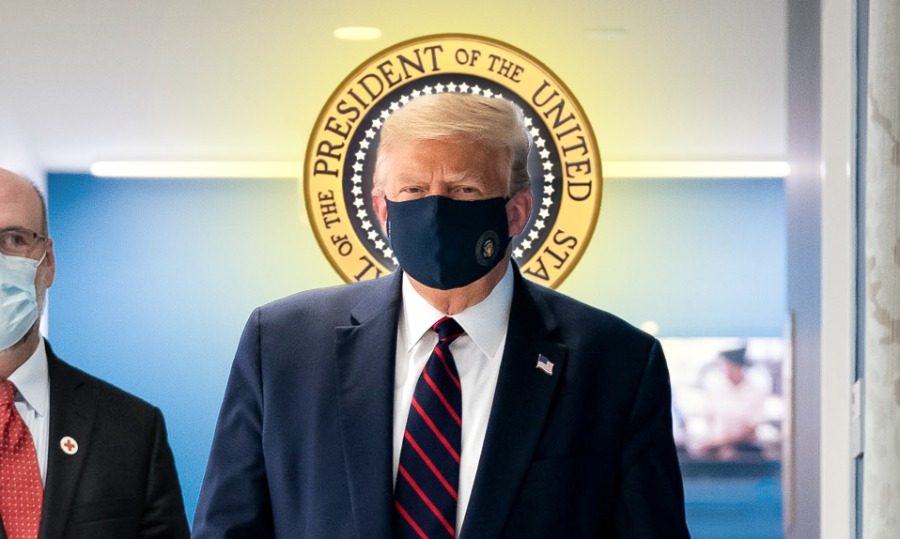 Okay, fellow Trumpists, I’ve stumbled on troubling news. Having done due diligence with reliable sources, and gone to God in prayer, I feel a burden on my heart to share it with all of you. Donald Trump is not our Lord and Savior, Jesus Christ. In fact, he is just a man — all man, not God at all. There’s no hypostatic union of divine and human natures, such as bedeviled Church councils in the third and fourth century.

Nope, not a bit of that. In fact, Trump’s not even a deeply religious person, but a kind of lapsed Presbyterian. His marriage to Melania isn’t recognized by her own Catholic Church. So he’s not even a prophet. We have no way of knowing if he is (in Protestant terms) “saved,” or (using Catholic language) in a “state of grace.”

I Will Explain This Slowly, in Small Words

Let me give you a few moments to process this bad news, before I go on any further. Please think through its implications. If you want me to, I can explain this information again, using small words and speaking slowly. But then you don’t need me for that. Just go read past issues of Christianity Today, which patiently do so. Or read one of the list of Approved Christian Commentators, who are still on the good side of rich, hawkish neocon foundations in D.C.

Are we all on the same page now? I’ll assume we are. I know it will be wrenching, to take down that life-sized, 24-karat gold-plated statue of Trump from each of our sanctuaries. No more will we smell the sweet incense we used to burn before it, while chanting, “My lord and my God!” We Catholic Trumpists will have to discard the hair clippings and nail filings we obtained from dubious “relics” dealers, supposedly taken from Trump. No more will we count on their power to heal our sciatica and take away our warts.

A Scapegoat, but Not the Lamb

Part of what confused us about the (surprisingly significant) differences between Donald Trump and Jesus was the way Trump became a scapegoat. He was indeed heaped up with all sorts of crimes of which he was innocent. Being a racist — though his long list of black friends attested otherwise, along with prominent black Christian leaders, and millions of voters. Being a dictator — even though his critics were never punished, and he couldn’t even get his own appointees to stop betraying him. Abusing the law — even though it was his friends and allies who kept getting prosecuted falsely.

Still, it is true that Trump would issue some pretty intemperate Tweets. That assault on our winsomeness completely betrayed the Gospel. A number of Christian lady bloggers have assured me of this, and I believe it.

The Man Behind the Curtain

It was easy for conservatives and Republicans to find themselves confused by Trump, I must admit. Since Ronald Reagan left the stage, the GOP hasn’t boasted a single effective popular leader. We had no way to even spot such a figure if he appeared. Instead we made do with scarecrows like George W. Bush, tin men like John McCain, and cowardly lions like Mitt Romney. No wonder that when we heard the great booming voice of Donald Trump, we mistook the man behind the curtain for something … superhuman. When we saw him rally working people, black folks and brown folks and long-scorned “Deplorables” together at massive rallies, it seemed to us like magic. And so we bowed down and worshiped this Wizard as a god. For that, we’re now repentant.

If Trump leaves the scene, we will safely return to voting half-heartedly for the evil of two lessers, for business suits stuffed with newspaper and mannequin heads, like Paul Ryan and Nikki Haley. No chance of mistaking them for anything more than what they are.

We Disobeyed Our Betters

Likewise, when we saw what looked like massive evidence of election fraud, we disobeyed our betters who ordered us to ignore it. We should have trusted the divinely appointed authorities of NBC, Twitter, and Google to hand on the truth to us. Only they can keep us safe from the wicked, heretical conspiracy theories which we are foolish enough to swallow (such as voter fraud and China). And inform us which orthodox conspiracy theories we are bound to believe (such as Russian collusion and Systemic Racism). We lack the wisdom, tact and social polish to distinguish between such things.

Thank you, anti-Trump Christians. I now appreciate why you had to assume that anyone backing him politically was secretly part of a cargo cult, sticking black candles in old bottles of Trump Vodka, and whispering quotes from The Art of the Deal as pagan spells. You had no choice but to challenge us as “worldly” and “idolatrous,” for backing Trump’s pro-life, pro-American, populist policies. That wasn’t “false witness” but simple, prudent caution: Assume the worst of everyone, at least within the Church.

But not the World. You never issued such prophetic warnings to liberals who venerated Obama as a messianic icon of “Hope.” But that might have gotten you accused, vaguely, of “racism.” Your name would have appeared on some ugly IRS hit-lists. It would surely have made you radioactive at NPR, where you quite rightly hope to talk about your latest spirituality memoir.

That’s how one spreads the Gospel, after all. At least if you’re the better sort of Christian.