I get Donald Trump’s supporters. They are like every member of my family, and all my old friends back in Queens. They’re the people whose interests I look out for first, out of sheer instinct — the white working class. Guys like my dad: cops, firemen, mailmen, and factory workers. To care about anyone else, I have to exert some effort. (And because I’m a Christian who believes in full human equality, I do. But I’ll admit that it needs grace and takes work.)

I have been arguing for tighter U.S. borders since Donald Trump was sweating illegal aliens to cobble together Trump Tower. I wrote myself out of “movement” conservatism when I came out against the Iraq War back in 2002 — while Trump still was for it, before he was against it. I backed Pat Buchanan in 1992, 1996, and 2000, then Ron Paul in 2008 and Michelle Bachman in 2012. Liberals have falsely called me a racist, an anti-Semite, and a xenophobic nativist, but I never backed down or cringed. I hope that all that earns me a place at the card table, guys.

But I need to tell you that Donald Trump is bad news for us, for people like my dad, like my nephew the electrician and my sister the nurse. Now, along with Donald Trump, we are all are sick of seeing America get ripped off by illegal aliens dropping their anchor babies and cashing their welfare checks. We’re sick of seeing mosques pop up all around our neighborhoods full of people who dress and pray like terrorists on TV. We’re sick of watching every other ethnic or interest group strut around in “pride marches,” while the people who founded this country are the tribe that “dares not speak its name.”

Things have gotten out of balance. We have over-corrected for the real racism and human cruelty that some of our ancestors engaged in, just as Germany over-corrected for all the Jews and Slavs it deported and murdered by … inviting in more than one million Jew-hating Muslim colonists. (Yeah, that makes sense. Let’s do that!) It’s time to push back to the center. Trump gets that, while most others don’t.

First, Trump is a con man who got rich ripping off people like us. We’re the kind of people

In each case, when the scam went belly-up and hard-working people lost their shirts, Trump laughed all the way to the bank.

Yeah, I recognize Donald Trump, from Queens. He’s every crooked landlord who wouldn’t give us heat and hot water, every manager who defrauds working stiffs out of overtime, every union boss who cuts a side deal with “management,” every mob-connected builder who leaves the conditions at his worksites a little more dangerous, so he can chomp a few more bites of Trump Steak at Smith & Wollensky’s. (No, they never served Trump Steak there — it wasn’t good enough.)

Second, and much worse, Trump is an opportunist, who is dragging our good name — the name of conservative, working class white Americans — through the mud by slumming with genuine, anti-Christian, Jew-hating, conspiracy-peddlers and outright racists. Why did he give cozy media access at one of his rallies to James Edwards, whose podcast has featured David Duke denying the Holocaust and blaming Communism on “the Jews”?

Why did he let his son, Donald Trump, Jr., do a friendly interview with this David Duke fanboy? Why was Trump so coy about renouncing support from David Duke himself? He keeps saying, “I disavow,” but still won’t say what or who he disavows.

Understand, I don’t think Trump is a sincere racist or anti-Semite. He’s using such people, as he is using working class patriots, coyly distancing himself from extremists when necessary, but winking at them just enough to keep alive an army of pro-Trump, white racist, Jew-baiting trolls. These are the kind of sociopaths who stalk National Review columnist (and solid conservative Christian) David French, because he has criticized Trump and adopted a black girl. They troll him constantly, calling his beloved daughter a “mud baby” and a “niglet.” They call him a “cuckservative,” a vile term I won’t explain. This Tweet, alas, speaks for itself:

These Trump trolls send Mr. French photos of little black girls, with chimp faces pasted on them, and photos of black men who shot themselves. They send Jewish columnists cartoons of Trump in a Nazi uniform, and the columnist in a gas chamber. Sometimes it’s Bernie Sanders, who’s also Jewish, as below. 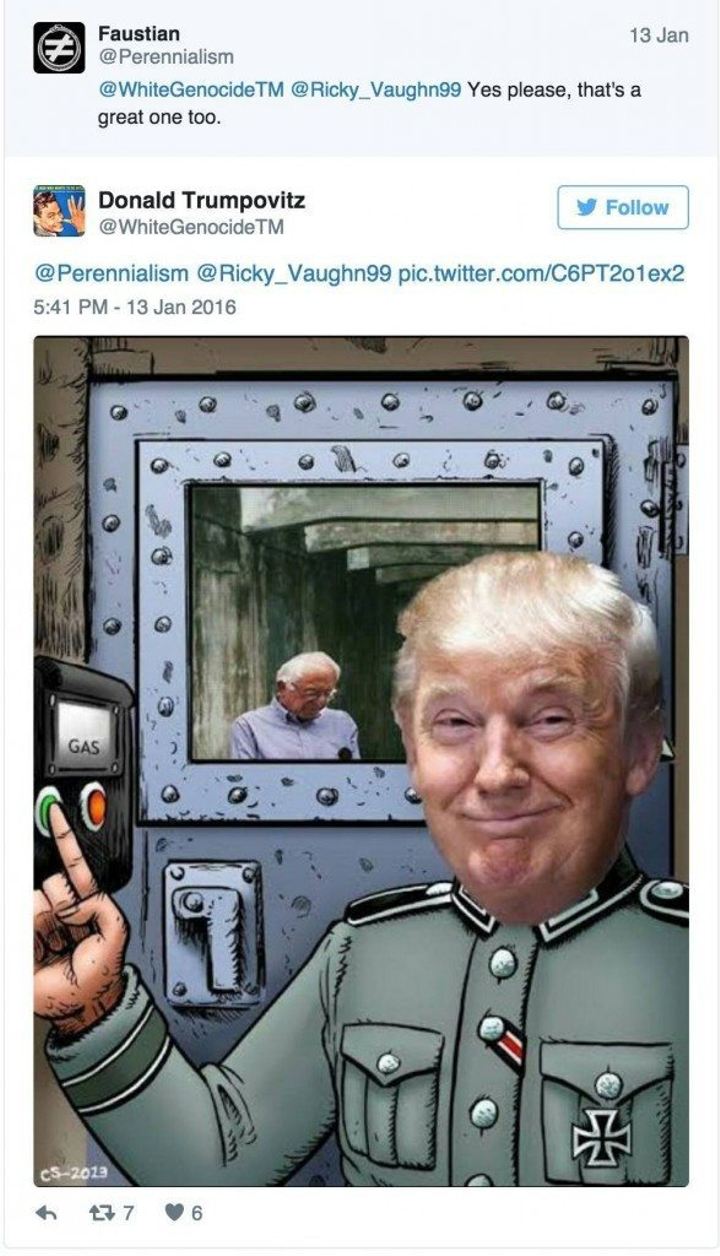 Sometimes Donald Trump helpfully re-Tweets these people, as he did the neo-Nazi troll who made the image above, “WhiteGenocide.” No way that Trump could have figured out what that guy was all about, not with his faulty earpiece.

There is no greater gift Trump could give his old friends Al Sharpton and Hillary Clinton than this: to smear the American flag and the blue collar my dad wore with pride with the blood from lynchings and hate crimes, with the dirt that Holocaust deniers smuggle home with them as souvenirs from Auschwitz.

It was men like my dad who served under General Patton in 1945, cleaning up the filth that the Nazis with their sick racial self-worship left behind. Dad lies in a veteran’s cemetery now, and electing Donald Trump in his name would be like using his headstone as a urinal.