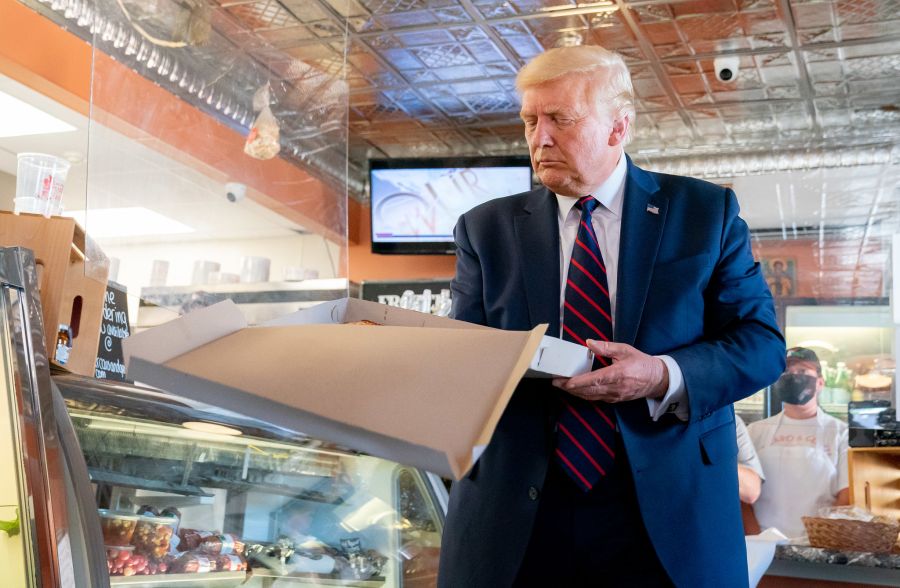 President Donald J. Trump makes a stop at the Arcaro and Genell Takeaway Kitchen, a pizza shop in Old Forge, Pa., Thursday, August 20, 2020, during President Trump’s visit to PA. He'll be feasting this week on Democrats at the RNC convention.

Donald J. Trump begins a four night engagement tonight, live from the White House, Charlotte and who knows where else. Technically, it’s the Republican National Convention in Charlotte, but thanks to Covid-19, participants and venues will be scattered about the country.

However, make no mistake, Trump will be the top act on the bill every night. And why not?

Politics aside, love him or hate him, he’s the best show in town. Why keep him away? One reason Bruce Springsteen is rightly considered the best live performer of the past 50 years is because he never phones it in, you’re guaranteed an experience, and you’re never quite sure what musical surprise he has in store. Your eyes are glued to the stage, however exhausted you get.

Trump can also be exhausting. Yet there’s always a surprise, always a moment. Sometimes several. Is it a devastating jab to light up Twitterverse? Is it an historic announcement? A 10-minute spontaneous comedic riff on showers and toilets that stand-ups at the Comedy Store would kill to be able to craft? A comment that makes CNN talking heads explode (only to prove true down the line)?

A common sense solution to a problem the Swamp’s been stuck on for years? A barb that makes even supporters go, “Oh why’d he have to go there!”? A fun anecdote from his days among the glorious and glittering? A powerful reminder of what is great and good about America?

Sometimes he crams them all together, riffing from one to the next with dizzying speed, leaving you out of breath and your head spinning. (Kinda like the old Springsteen’s encore favorite “Detroit Medley.”)

Yes, the mainstream media loathes Trump. 95% percent of his coverage is negative. But they can’t stop talking about him. They also know he puts fannies in the seats. And whether in joy or anger, he gets those fannies jumping.

I still hold that one reason so many entertainers gripe about Trump is because he’s better at it than they are.

The business end of the convention takes place in Charlotte, under strict Covid restrictions. For example, only 336 delegates will be present. CNN summarizes the 8-hours of prime time this way:

Trump, a television producer at heart, is hoping for a convention next week that looks vastly different from the all-digital event Democrats have staged over the past days — including an emphasis on live programming and at least some type of audience who can respond to the multiple appearances he is planning.

Translation: He wants to avoid the convention being dull. And that means TV producer Trump making sure TV star Trump is ever-present. Who needs actress Eva Longoria when you’ve got the star of The Apprentice?

Each night will also feature Trump family members.  (Well, maybe not his niece, a wretched creature who leaked a secretly recorded conversation with Trump’s older sister the weekend they buried their brother Robert.)

The schedule of speakers is still fluid, but keep a special eye out for:

Nick Sandmann The Covington high school teen falsely slandered by CNN, the Washington Post and a slew of other media outlet (and his own bishop), will be speaking. Hopefully, without some radical banging a drum in his face.

Mark and Patrick McCloskey The St. Louis couple charged after defending their home, their lives and their dog from a horde of protesters who broke onto their property.

Alice Johnson The black woman who was serving a life sentence before being freed by President Trump. The first of those many thousands to benefit from Trump’s Second Chances effort and prison reform.

The Parents of Kayla Mueller The humanitarian aide worker kidnapped, tortured and murdered by ISIS.

Here’s a basic rundown and themes of the four nights.

Monday, “Land of Promise”: During the day, delegates will convene in Charlotte. They’ll conduct the traditional roll call vote and formally renominate Trump and Mike Pence for the Republican Party’s presidential ticket. Usually, this is done in prime time, but the GOP is getting that bit of business out of the way early. Rumors are Trump will be there.

A late add to the line-up is Congressional candidate Kimberly Klacik, whose indictment of Democrats running Baltimore and other big cities went viral last week.

The Trump family is represented by Donald Trump, Jr. and girlfriend and former Fox News host Kimberly Guilfoyle. (Bonus points if Don Jr. uses the occasion to propose to her. Cheezy? Not as cheezy as Biden and others constantly evoking his late wife.)

Tuesday, “Land of Opportunity”: Eric Trump and Tiffany Trump are scheduled, as is Nick Sandmann and Abby Johnson. First Lady Melania Trump will be the top name. She’ll be speaking from the newly-redesigned Rose Garden. It’s actually a throwback to Jacqueline Kennedy’s original blueprints. But that isn’t stopping the deranged TDS crowd from hyperventilating.

Former New York Times reporter Kurt Eichenwald was particularly savage and xenophobic. He’s “furious” a “foreigner” would “wreck a piece of history.” You have to see the tweet to believe it. Melania speaks five languages and in not one of them is a word to describe that level of stupidity.

The night will end with fireworks. But with Trump, isn’t that always the case?

How Worried Should We Be for the President and First Lady?