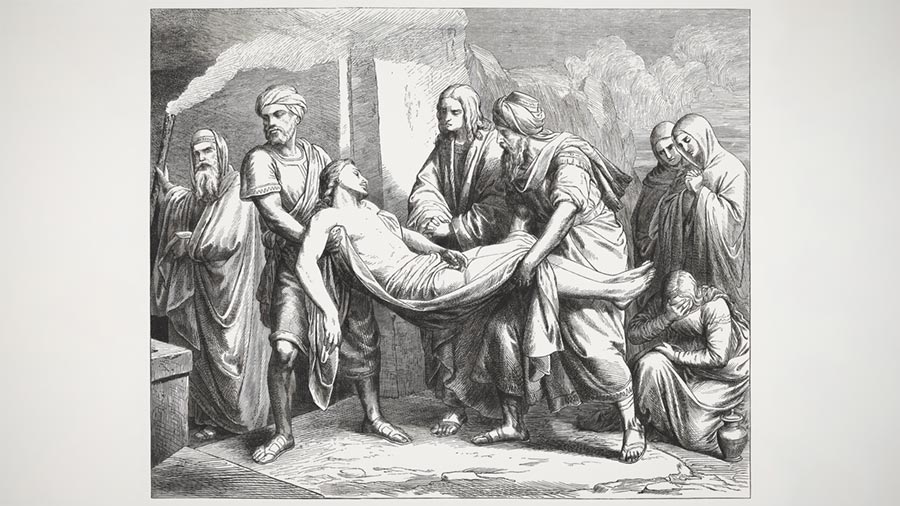 “We had all hope our hopes riding on him. He lost. Now we’re in a worse mess than ever. What on earth are we going to do now?”

That line could have come from conservatives here in America last January, once the election challenges were over and done with. Or it could have been Jesus’ disciples saying it, after they took Him down from the Cross.

You do see the similarity, right? No, not between Jesus Christ and Donald Trump, but between Jesus’ followers then, and a lot of Americans today. Both groups put their hope in a man who stirred things up for a few years. Both groups saw their hero go down to defeat. “Hope? Now?! No, that’s over. We’re in for it, that’s all.”

Holy Saturday and an Unholy Year

That was Holy Saturday then. This whole year feels like an unholy Saturday to some of us. The White House is a disaster, Congress is at least as bad, and we’re the first generation in history whose government has made it illegal to see another human being smile in public. Maybe your family is in great shape; I hope so. Or maybe not. Either way, everywhere you can see in the big scheme of things, reality is a mess.

It was a mess, too, for the disciples that dark Sabbath after Good Friday. Their champion hadn’t just been voted out, he’d been killed. Not before the authorities had terrorized him, though. And not before they’d embarrassed him. Pilate hung a sign “The King of the Jews” over his head. I can’t believe it was because he saw Jesus as any real king, though. I think he was using Jesus to show everyone who was really in charge. Total humiliation, that’s what it was, on top of all the rest.

And Jesus took it. He even cooperated with it. You’ll notice already we’re running very thin on comparisons between Jesus and Donald Trump, but don’t forget, we’re just as thin on comparisons between Jesus and you. Or me. Or anyone, including every other religious leader. Church historian Bruce L. Shelley’s said it best: “Christianity is the only major religion to have as its central event the humiliation of its God.”

Jesus: Right On Strategy, By Way of Pain and Death

We know how it comes out, though, or at least I hope we do. Jesus took it all, even to the point of letting it look like it had won. But then came Easter, the moment when He turn it all upside, when He showed He didn’t just let it happen, He planned for it to happen. Re-read the story and see who looks like He’s in charge. It’s not the High Priest, it’s not Pilate, and it’s not Herod. It was Jesus. He was on strategy, at every point along the way.

I understand the teachings. He died to take upon Himself the death due each of us for our sins. He paid the price so we could be forgiven. Then He duked it out with death, and He won, not only for Himself but for anyone who would trust in Him.

I’ve got that teaching stored in my bones, where I know I’ll never let go of it. Here’s the one I’m grappling with now, though. If Jesus was on strategy all the way through, that must tell us something about how God works in other lives and other seasons, specifically this: His plans, His strategy, may include pain. Or loss. Or humiliation. Or death.

God Strategizes Things a Lot Differently Than I Would

See why I’d say I’m grappling with it? I know it’s true. I see it plain as day in God’s dealing with His people in the Old Testament. He sent prophet after prophet, good king after bad king, imploring them to know and worship Him as the one true God, the one Source of life and truth. It took an incredibly painful defeat and exile to finally cure them of their idolatry. It worked, though, and it’s still working.

So again, I know it’s true. If it was clear in the Old Testament, it’s infinitely clearer in Jesus’ death and resurrection.

God strategizes things differently than I would. That’s what bothers me. I’d rather be the one who’s right this time. I’d rather be able to tell reality I’m doing fine as I am, and I’d just as soon be left alone that way. Instead I’m stuck, as you are, in a world where the right people seem to lose and the wrong people seem to win.

Even that much is easy enough on one level. Ask me how so much pain is possible in a world ruled by a good God, and I’ll have a ready answer for you. God gave us free will for very good reasons, but it couldn’t truly be free unless it included freedom to make wrong choices. Wrong choices have consequences.

God will gladly rescue us, but He doesn’t do it without cleaning us out and rebuilding us at the same time. You can’t even clean out your garage without disturbing things, so why would I expect God to straighten me out without disturbing me in the process?

That’s the short version of a much longer answer that I find totally satisfactory, on an intellectual or philosophical level. Life is a whole lot more than philosophy, though, and this is 2021. We made it out of 2020 (or at least those of us who are reading this did), the year that at the time we thought, with admittedly short and self-centered memories, was the worst of all years; and this one isn’t looking any better.

Can we in 2021 still believe God knows what He’s doing? We must. It’s the only hopeful answer, the only one that will keep some of us moving forward; and for an actually good reason to say yes — for while those are real benefits, they’re not real reasons — it’s also true.

Holy Saturday is a Good Saturday

Yet it’s also true because of Holy Saturday. I know of no theological reason Jesus couldn’t have died on Friday afternoon, been shrouded for burial, put in the tomb, and walk out alive an hour later. He still would have done His saving work for us. But He waited. He let His people wonder and worry. He let them wait and bear their pain, with no new hints of how He planned to relieve it.

Let this day, and the entire weekend, be for you the old clue that reminds you how His strategy so often moves through pain and loss to victory.

We know the story now, and what a great story it is! And isn’t it better, really for the delay? It makes Holy Saturday into a good Saturday. We follow the story with a sense of suspense, the kind of suspense that comes not with approaching doom but approaching glory. We can do that from here, because we know that’s how it will end.

In the process, though, God is teaching us that this is how He works, and this is how our stories will end, too: In the sudden relief of all despair, and in the sudden arrival of great glory.

So Do Not Rush Too Quickly to Easter

So here is my recommendation, if I may give it: Do not rush too quickly to Easter this year. Let it come when it comes, on Sunday morning, for it will come as surely as the sun will rise. Until then, make the most of Holy Saturday. Let it remind you that 2021 is another kind of Holy Saturday, that is, a time of waiting, with no new clues from God as to how He plans to relieve it.

Let this day, and the entire weekend, be the old clue that reminds you how His strategy so often moves through pain and loss to victory. That’s how Jesus did it for Himself then. It’s how He did it for us then. It’s how He’s still doing it in us today.

When will victory come? I don’t know. What will it look like? I don’t know that, either, and I don’t need to know. I know enough, though: I know how God works. Victory will come, as sure as the sun will rise tomorrow morning. And there is always reason to keep on hoping.

Feeling Hopeless? Desperate? Here’s How You Can Still Make a Difference