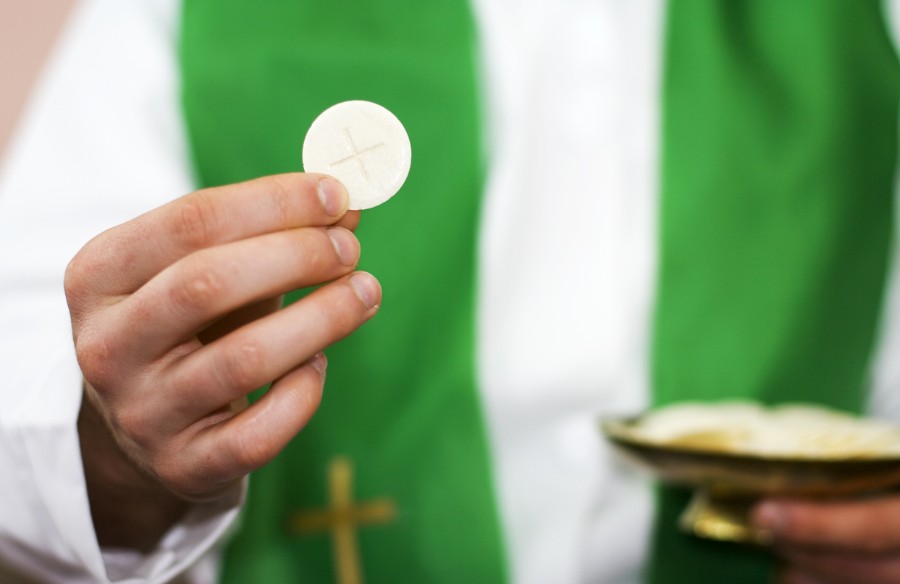 By Dwight Longenecker Published on December 2, 2019 •

Last week it emerged that a Catholic priest in Michigan denied communion to one of his parishioners. Rev. Scott Nolan called Judge Sara Smolenski and asked that she not present herself to receive communion because she had entered a civil marriage with another woman.

Smolenski Painted as Victim, But Brings LGBTQ Activism to Mass

CNN reports on the case here. The article points out that Smolenski was a longtime parishioner of St. Stephen Catholic Church and a lifelong Catholic. She contributed to their building campaign. Monica Haider, reporting for CNN, affirmed that the Bishop of the Diocese of Grand Rapids, David Walkowiak, backed Rev. Nolan’s decision. As might be expected from CNN, the article portrays Judge Smolenski as a victim of the cruel and homophobic Catholic Church.

By their “marriage” they are saying formally and publicly, “We don’t believe what the Catholic Church teaches. And we plan to continue in this denial of the Catholic faith for the rest of our lives.”

What Haider failed to report was that Judge Smolenski is not only “married” to her female partner. She has officiated at numerous same-sex weddings in her capacity as a judge. She has also waged a public campaign against Rev. Nolan and Catholic policy on the matter. This article has more detail. Haider also failed to report that Smolenski had led a group of LGBTQ activists to wear rainbow badges to Mass at St. Stephen’s. Thus she brought her activism into Rev. Nolan’s church in an aggressive protest. More on this story here.

The Catholic Church Does Not Ban Gays From Communion

The events in Grand Rapids echo others over the last few years. Homosexuals who have “married” their partners have been removed from official posts in Catholic schools and dioceses. What is often not clear is why Catholics take the step to remove such persons from employment and ask them not to present themselves to receive communion.

Basing itself on Sacred Scripture, which presents homosexual acts as acts of grave depravity, tradition has always declared that “homosexual acts are intrinsically disordered.” They are contrary to the natural law. They close the sexual act to the gift of life. They do not proceed from a genuine affective and sexual complementarity. Under no circumstances can they be approved.

The number of men and women who have deep-seated homosexual tendencies is not negligible. This inclination, which is objectively disordered, constitutes for most of them a trial. They must be accepted with respect, compassion, and sensitivity. Every sign of unjust discrimination in their regard should be avoided.

People who experience same-sex attraction are not banned from communion. Even a man or woman who is actively engaged in homosexual behaviors is not banned from the practice of their faith. If they stumble into sin, like anyone else, they may be reconciled to the Lord through confession and forgiveness and be restored to communion.

Falling into Sin is Different From Denouncing Church Teaching

Experiencing a temptation and even falling into sin is one thing. Declaring that it is not a sin and formally and publicly identifying with that sin through a “marriage” ceremony is something else. It is an action that excludes the person from the Catholic Church.

Why? The problem is not the homosexual inclination or even the homosexual behaviors. No one is guilty for experiencing temptation. Those who yield and fall into sin can be forgiven. When a homosexual person “marries,” however, they are taking a step that denies the teaching of the Catholic Church. And they are doing so in a formal, public, lifelong manner.

By their “marriage” they are saying formally and publicly, “We don’t believe what the Catholic Church teaches. And we plan to continue in this denial of the Catholic faith for the rest of our lives.”

Repudiating the Church by Their Actions

How can they then remain a Catholic? They have repudiated what the Catholic Church teaches. And they’ve done it publicly, formally, with a lifelong commitment.

The Catholic Church is Not Homophobic

This issue is surrounded with a lot of sentimental argumentation which often portrays the homosexual persons as victims. They are not victims. They are crybaby bullies, playing the victim when very often, like Judge Smolenski, it appears that they are activists out to pressure the Catholic Church into changing her beliefs.

Everyone should understand that the Catholic Church is not homophobic. The teaching of the church calls Catholics to accept people who experience same-sex attraction with respect, compassion and sensitivity. The Church also teaches that every sign of unjust discrimination should be avoided.

Every institution, for its own survival, must have boundaries; and the boundaries need to be observed. Catholics who “marry” someone of the same sex put themselves outside the Catholic Church.

There is one final point to show that the Diocese of Grand Rapids’ decision is not targeting homosexuals. Any Catholic who is in an irregular marriage is also asked to abstain from receiving communion. If Catholics are remarried after divorce (for example), they too are in an irregular marriage situation. And they therefore should also not present themselves for communion.

Anti-Catholicism has a long and lamentable history in the United States. It is time the politically correct media stop attacking Catholics. They should take time to learn what Catholics really believe. And they should respect the religion even if they disagree with it. This is something called “religious freedom.” It is a foundational freedom for Americans. And it is worth fighting for.

Fr. Longenecker is a Catholic priest working in South Carolina. Read his blog, follow his podcasts and browse his books at dwightlongenecker.com