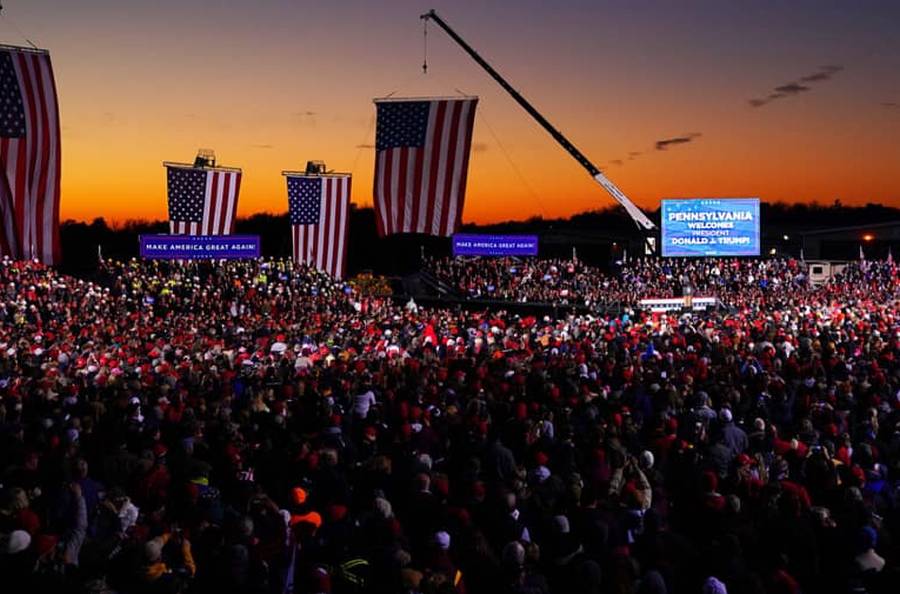 The administration's idea of a terror group.

Not even the anniversary of 9/11 could stop the Biden Administration’s war on patriotic Americans. Homeland Security Secretary Alejandro Mayorkas declared “the threat landscape has evolved considerably” since 9/11. Even though foreign terrorists are slipping through the border like water, and even though the Taliban is not only still hosting al-Qaeda, but is sitting on billions of dollars of deadly weapons Biden gifted them, Mayorkas says domestic terrorism is the real threat. Oh, he’s not talking about ANTIFA or BLM, who’ve engaged for two years in a terror campaign against America. He means those with an “ideology of hate, anti-government sentiment, false narratives propagated on online platforms.”

Biden has already publicly defined “MAGA Republicans” as carriers of hate.  Parents at school board meetings are anti-government — to the point he’s launching counter-terrorism efforts against them. And “false narratives” means “I do not think a senile incompetent who didn’t campaign legitimately got 10 million more votes than Barack Obama,” or for that matter, “I do not like being forced to take the jab.”

They’re the terrorists. They’re more dangerous than al-Qaeda and ISIS and Hezbollah.

Says former Democratic congresswoman Tulsi Gabbard:  “Our democracy is in grave danger. Government institutions — from DOJ, DHS to the IRS — are blatantly being weaponized against political opponents of those in power. Being punished by the state for dissenting or merely asking questions is the hallmark of a dictatorship.”

And we know who’s at the top of the kill list.

Lawyer Harmeen Dillon confirmed to Tucker Carlson she had three clients of hers raided. The number could go higher as our descent into Third World chaos goes deeper.

“Well, the truth is that a few days ago, a political reporter called several people and said, ‘Hey, have you heard, or have you been served yet?’ The FBI is going to be serving 50 approximately search warrants and or subpoenas on Trump supporters. And then, you know, within 24 hours of that, two of our clients, three of our clients, actually, did either get search warrants or subpoenas. And these subpoenas are extremely broad.”

The activities seem centered around the Save America Rally. But who cares about that whole “petitioning the government” part of the Constitution. If it isn’t on a cue card for Biden, it doesn’t exist.

More specifically, the Feds seem particularly interested in the effort to put up alternate electors from the swing states that were corrupted. An effort dubbed at the time foolhardy, desperate and without legal basis, but nobody suggested was a crime. An effort, not incidentally, similar to the 2016-2017 effort by the Democrats to pressure electors pledged to Trump to switch their vote to Hillary. Nobody raided Hillary’s house or her supporters. Nobody dubbed them domestic terrorists.

America, gird yourself. The regime will stop at nothing to stop Trump from running and winning. He will be charged with trying to overthrow the government by the same people who’ve been proven to sabotage his presidency and corrupt the 2020 election.

The people are catching on. A shocking new poll from Rasmussen. For the first time, a majority of voters now want to see Joe Biden impeached. Not “back off running again in 2024.” Not “retire.” Impeached. As in thrown out of office for high crimes and misdemeanors. This includes a third of registered Democrats.

Only 21% including only 32% of Republicans think it’ll happen, though, even if the GOP takes over the House. The cynicism is understandable. Accountability in Washington is extinct … if you are of a particular political persuasion.

Punishment in Washington is guaranteed, if you are of the wrong political persuasion.

Which gets to a frightening hypothetical. Suppose the Biden DOJ indicts Trump for “insurrection.” GOP does move to impeach Biden for any number of offenses, starting with abuse of power. What’s to stop the DOJ from claiming the impeachment was part of the “MAGA Republican” “semi-fascist” effort to overthrow the government? What’s to stop the DOJ from raiding and rounding up all the House Republicans who voted for impeachment? After all, Biden’s already declared them enemies of the state.