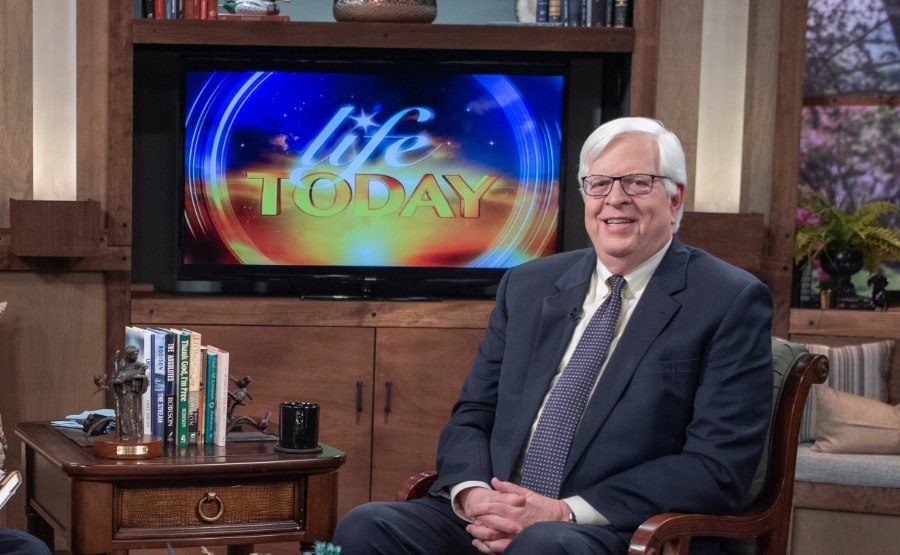 Note: We first ran this story in September. Dennis Prager’s LIFE Today episodes are running this week. The links take you to Episode One and Episode Two. Episode Three runs Thursday. Check them out. We promise you won’t be disappointed.

“Christians are the last hope for saving America.”

So said Dennis Prager during a remarkable night of taping Tuesday night at our LIFE Today studios. The conservative talk show host, columnist and Jewish scholar sat down with evangelists James and Betty Robison for three epic, entertaining, illuminating episodes.

James said he knows he’s going to get letters asking why he had a Jew on a Christian television show. “I believe he is here precisely for this moment. And I believe really and truly in many ways for the future, for the sake of freedom, and to show us we’re to stand firmly, unwaveringly, for that which is important for everyone that our Creator loves.”

Prager barely let Robison finish his opening welcome before jumping in with a spirited defense of Christians, expressing how he hates seeing Christians constantly maligned by the left. “You feed people in Mozambique, but the people who hate you, who call you haters, can’t even spell ‘Mozambique’!”

The conversation rolled and flowed from side-splitting anecdotes to deep, somber reflections on how close democracy is to collapse. God is a God of order, said Prager. The left is about chaos. We see this not only in politics, but in everything the left touches, from music, to painting, to sports.

The Fight for Free Speech

The loss of reason and stifling of free speech was a recurring theme. James and Dennis dug deep into Prager’s upcoming movie No Safe Spaces, which documents the abandonment of free speech on our campuses.

In one amusing but insightful illustration, Prager talked about playing stickball back in Brooklyn. If a friend was called out for saying something stupid, the friend would likely respond, “Hey, it’s a free country.” Said Dennis, “That’s not in the vocabulary of kids today.” They’re not taught this country’s freedoms.

So, why has the freedom of speech diminished in America and on campuses across the nation? Because “freedom is a value,” Dennis says. “It is not an instinct. The human instinct is to be taken care of, it is not freedom.” To illustrate his point, Dennis takes us back to the Bible. When God took the Israelites out of Egypt, “What is the first thing they do? Complain.”

Both James and Dennis admitted Trump had been their last choice among the GOP candidates in 2016. But Prager said knowing the policies and appointments Hillary Clinton would bring to the White House made supporting Trump in the end an easy decision. He dismissed the criticism that Trump is not a role model. For Prager, Trump’s “sin” is not at issue. We all have sin. The only question is what Trump does with the enormous power he’s been given.

“I love when people say, ‘Oh, kids, they look to the President for their values,’” Prager said. “And I go, ‘Really?’ Somehow I don’t remember my father ever saying to me, ‘Dennis — Lyndon Johnson. Watch how President Johnson behaves.’”

James and Betty also talked to Dennis about his Biblical commentary series, The Rational Bible. His best-selling commentary on Exodus was recently joined on bookshelves by his commentary on Genesis. Prager marveled that Costco carried both books. “If Costco carries the Leviticus commentary,” he joked, “then I know we’ve entered the Messianic Age.”

His reasoning is fascinating: It’s learning to understand and respect authority. If you can’t honor your parents’ authority, you can’t honor God’s. Prager asked his own dad what had been the biggest change he’d seen in society during his long life. His father said, “That’s easy. Kids run the home.”

Another major topic was Prager’s insistence that we are not teaching religion properly to our kids. He cited his oft-repeated question, “If a stranger is drowning and your dog is drowning, which would you save?” A shocking percentage of Christian and Jewish kids will say their dog — nearly a third. And another third say they don’t know. This is no different than the public at large. “We’re not teaching the basics that human life is sacred. Animal life is not.”

Not Just Love, But in the Fight

All told, the audience witnessed a wise, witty and warm conversation between the Jewish talk show host and the evangelical leader. The two men quickly formed an affectionate bond and partnership that both promised will last long beyond the episodes airing.

Dennis Prager’s three LIFE Today episodes are airing this week. Don’t miss them. No Safe Spaces: You Have the Right to Remain Silent is released October 25th. Watch the film’s teaser trailer with Dennis Prager: