A depiction of Christ by the author.

Recently, there have been highly publicized calls in the U.S. by the Marxist left for the destruction of Christian images on the basis that they push a white-European stereotype of Christ as a symbol of oppression.

The charge that Christians think Christ is white European is false, as a survey of Christian art shows. The claim shows an ignorance of art history. And that ignorance is influenced, ironically, by a Western, Eurocentric bias in the interpretation of history.

I have read a number of articles over the years that criticize the traditional representation of Christ. This, we are told, is not only historically inaccurate, but also betrays a northern European cultural bias.

Twice recently I have heard this discussion sparked off by the discovery of human remains in the Holy Land which date from the time of Christ, which have allowed scientists to create an image of the person from whom the bones came. The figure that is recreated is — surprise, surprise — olive-skinned and Semitic-looking. This indicates, so the logic goes, what Christ would probably have looked like. And this, therefore, show how narrow-minded Europeans are, and how culturally narrow Christianity is for portraying Christ as a white Caucasian.

In short, it would be said, Christ didn’t look like this painting by Sir Anthony Van Dyck, as the Church has often represented: 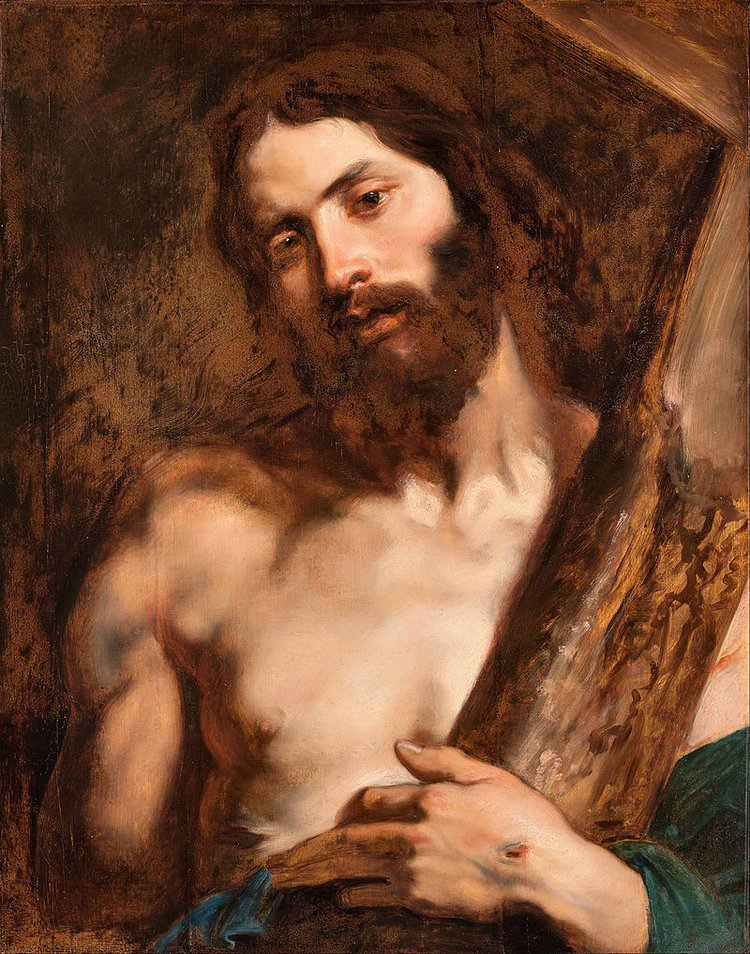 “Christ Carrying the Cross,” by Anthony van Dyck, from the first quarter of the 17th century (via Wikimedia Commons).

He looked instead more like this scientific reconstruction of a man developed from a skull discovered in the Holy Land. (According to the article, here): 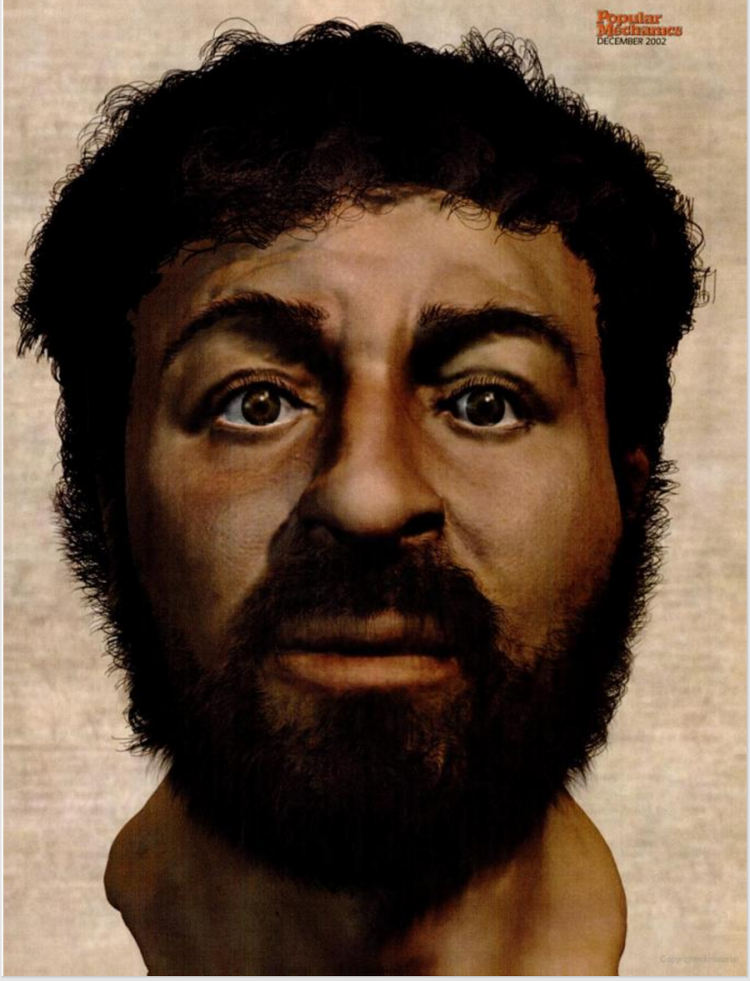 First, if ever there was a concocted news piece, this was one. Do we really need the discovery of a skull as evidence that a Jew living in the Middle East about 2,000 years ago might have been dark-skinned and Semitic-looking? Few Christians today would feel threatened by such a thought. It wouldn’t require the discovery of a skull to convince them.

Second, the argument reveals a narrow understanding of the Christian artistic tradition and a lack of appreciation of just how universally inclusive it is. Yes, there is a tradition of artists who present Christ as their own race or the race of those for whom the painting is intended. The idea behind this is to encourage people to believe that Christ is a person to whom they can relate to at a personal level. This is natural.

Sir Anthony Van Dyck, who was northern European and who spent most of his professional life working in England, might very well naturally paint Christ as a northern European. But why shouldn’t he? It’s as reasonable for a European to paint Christ as European as it is for him to be painted as an African for an African congregation, or as Chinese for a Chinese audience, as in this painting: 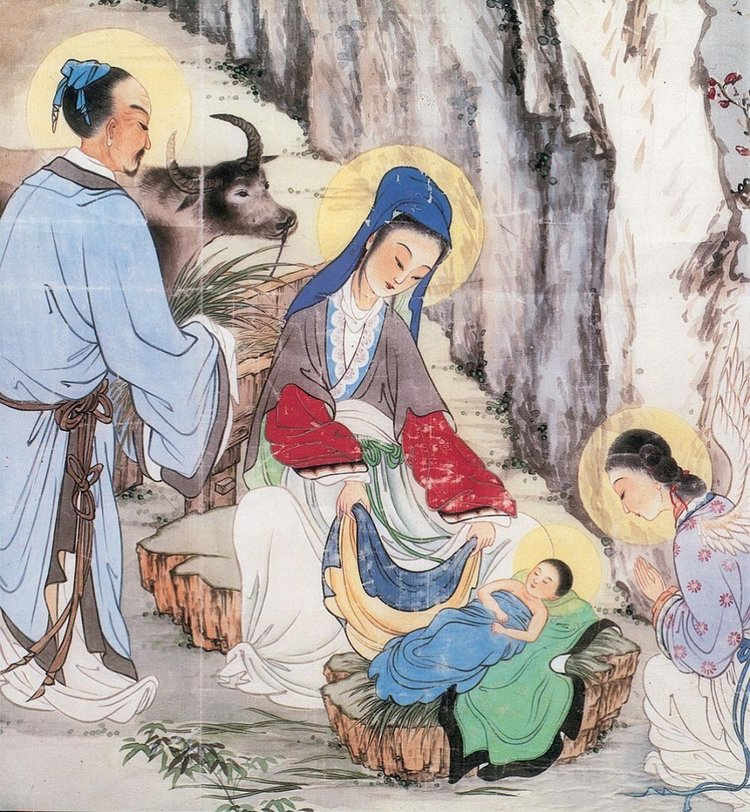 This desire to portray Christ in a form that the intended viewers will relate to can manifest itself in other ways. This famous crucifixion by Grünewald shows Christ with the open sores of a fungal infection transmitted through rye grain eaten in the bread of 16th century France. Those who suffered from this disfiguring disease were given care in a hospital, and this painting was for the chapel in the hospital. The intention was to give them solace by showing that Christ not only bore the pain of their sins but was suffering with them physically too. 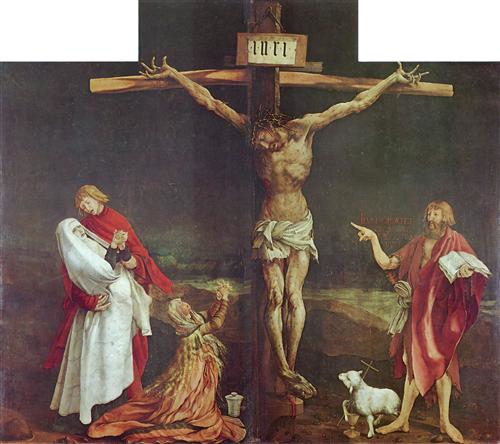 “The Crucifixion” by Matthias Grünewald, circa 1515.

On the whole, the depiction of Christ in the Christian artistic tradition does look more like the Van Dyck image than anything else. However, if we look more carefully at history, we see that this need not reflect a northern European cultural bias.

Look at these two images, first this one: 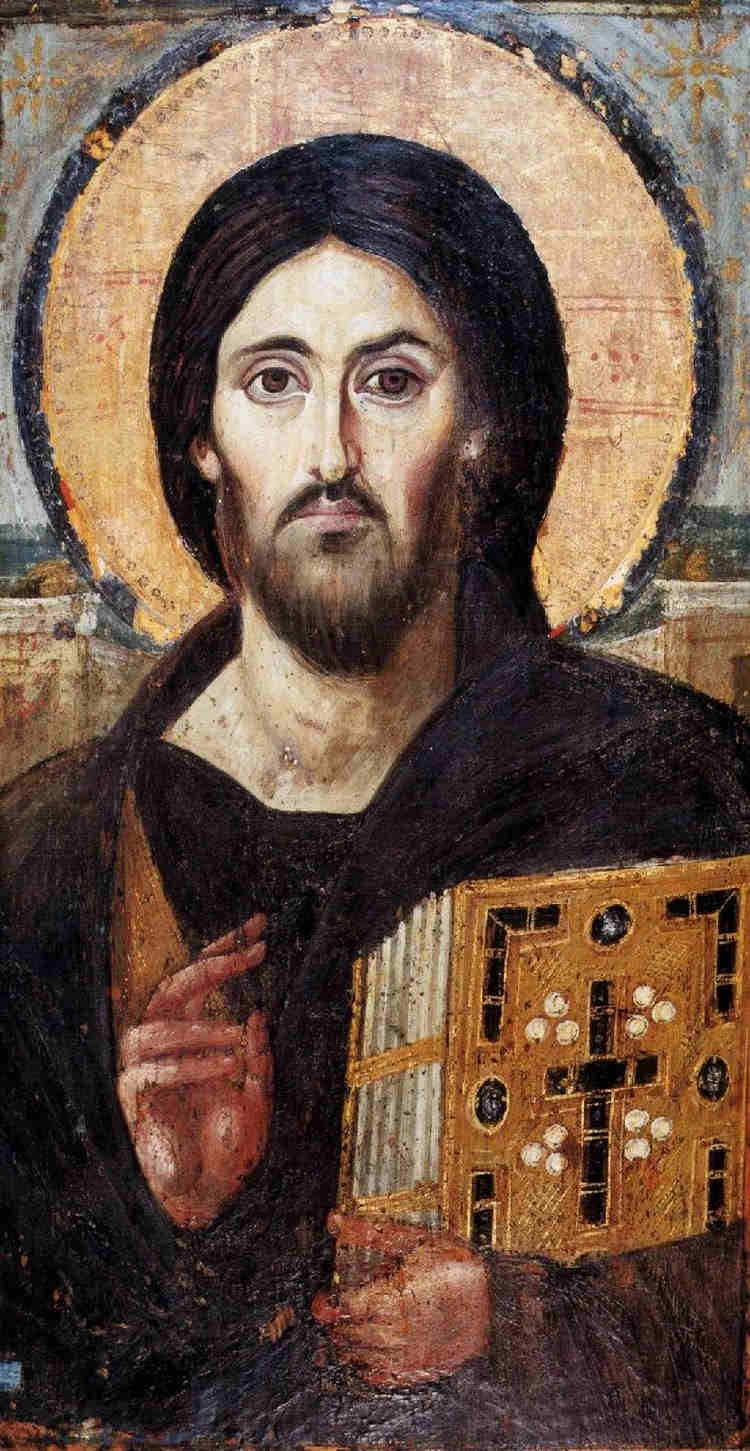 and now this one of Christ and St Menas: 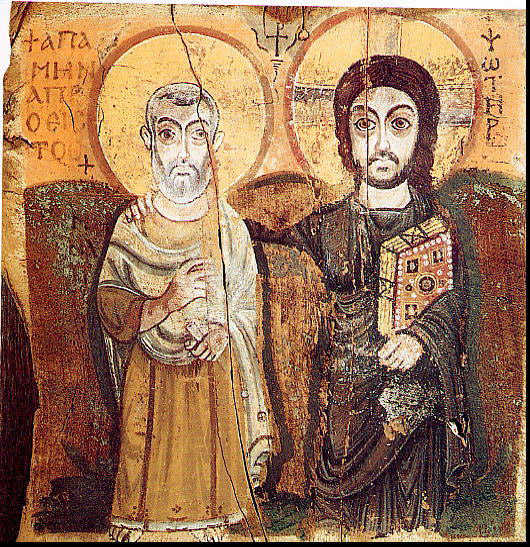 Both images represent as a light-skinned man. However, these have no connection with Western Europe; they were painted in Egypt. The first one comes from Mt. Sinai and dates from the 6th century. The second is even older, a Coptic icon from the 4th century.

Why did they represent him in this way? One possibility that never seems to be considered in these articles is that the tradition has preserved an image that corresponds to what Christ really looked like. If so, and it is historically accurate, one would expect to see others who looked similar. Well here are two portraits of Egyptians dating from even earlier, the 2nd century AD. 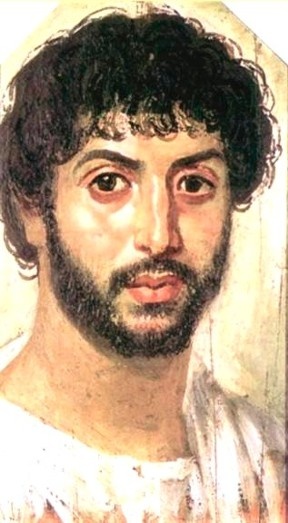 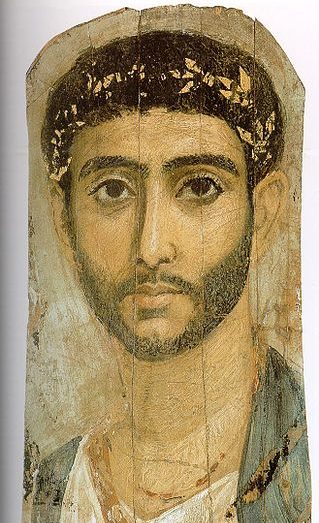 The two paintings above are portraits for coffins painted in encaustic, a technique by which pigments are suspended in hot wax. Not everybody would have been this light-skinned in Egypt at this time. But at least this shows that some were. Egypt is not the Holy Land of course, but one would have expected an Egyptian artist to have some idea of what those who lived next door in the Holy Land might have looked like. Nevertheless, if the images of Christ are not accurate and reflect a prejudice of Egyptian artists of the period, then the prejudice that created them is certainly not northern or Western European, but rather aristocratic 4th-century north African.

There is another reason why Christ would have been light-skinned in religious images, even if it was widely believed that he was naturally much more dark-skinned. This reason has nothing to do with racial stereotypes. The Christian tradition portrays Christ, to varying degrees, as an idealized heavenly figure. Even in naturalistic styles, such as the baroque exemplified by Van Dyck, there is always an element of idealization that points to this heavenly destiny.

The model for this is the Transfiguration. The three apostles, you will remember, saw Jesus transfigured on Mt. Tabor, shining with light. In authentic Christian liturgical art, there is always going to be an indication of the Light of the World. Sometimes the artist achieves this by lightening the whole complexion. Here we have a portrayal of Christ in 16th century, painted by El Greco. He was originally trained in Crete in the Eastern Mediterranean, but lived in Spain. 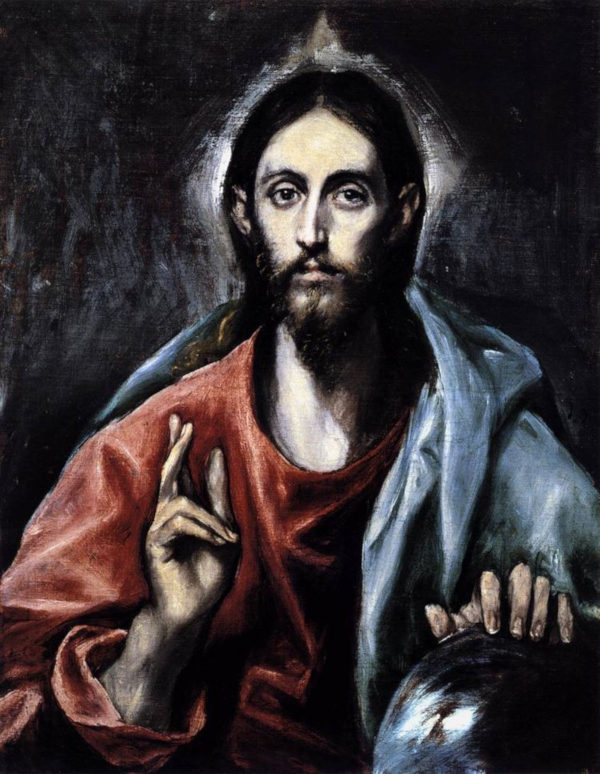 Sometimes the indication of the divine light is achieved by adding concentrated lines of pure white light that sparkle on the surface of generally darker skin. Russian icons especially tend to use this latter method. Ironically, it is in Russian art that we see some of the darkest skinned portrayals of Christ. I say it is ironic, because if racial or nationalistic prejudice was driving the portrayal of Christ, one would have expected a Greek living in Spain to paint a darker Christ than a Russian living in Russia.

The icon below is from the late 15th century by the Russian iconographer known as Dionysius: 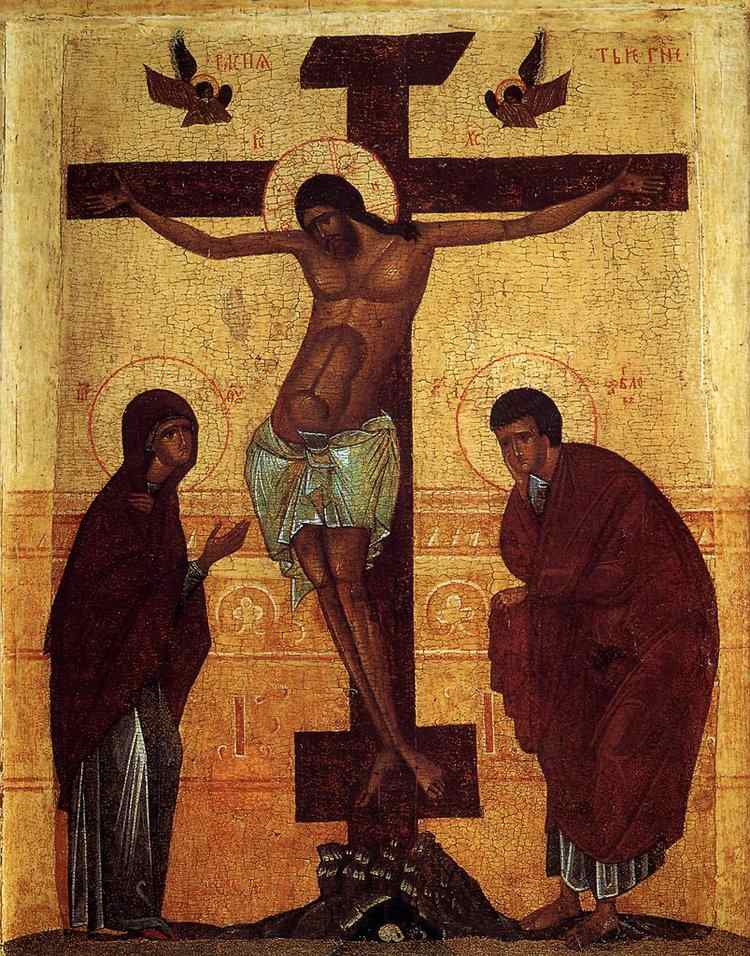 According to the story I heard, the prototype for the Russian style of iconography comes from an icon painted in Greece in the 11th century and then brought to Russia, now known as the Vladimir Mother of God. This has this same olive-skinned complexion. For those who are interested, the pigment color that produces this skin complexion is called avanna ochre. I was instructed always to use this color for skin by a teacher in London, and the reason was that it conformed to the Mediterranean complexion that Christ would have had. 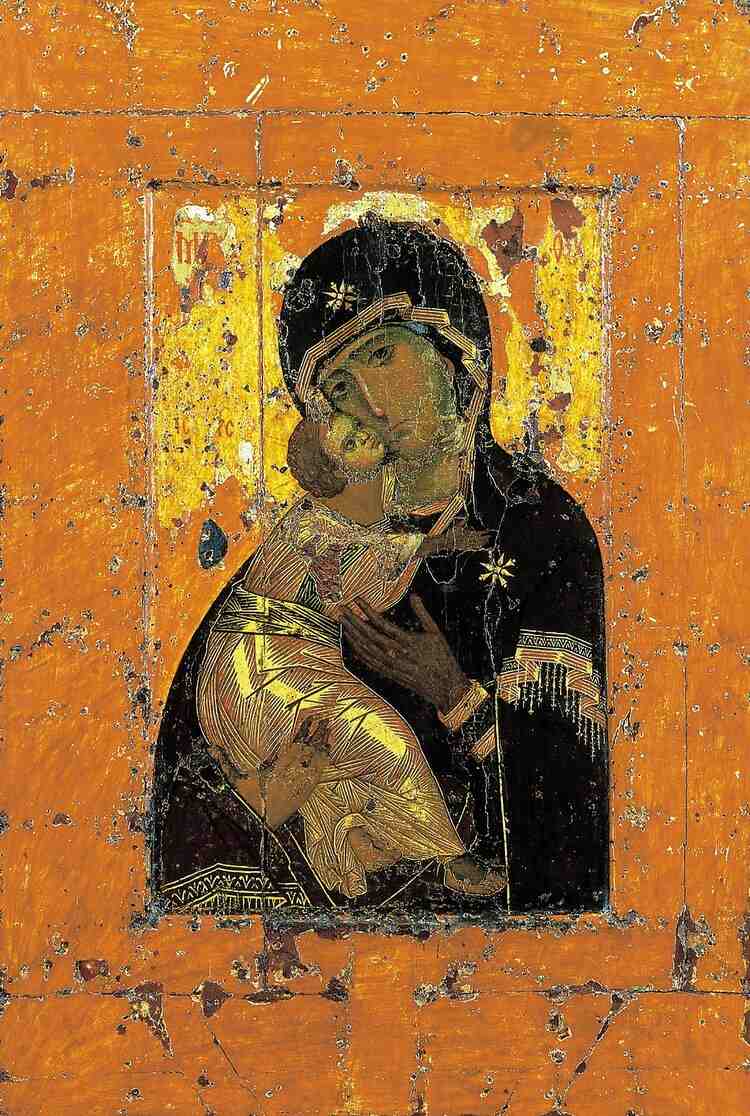 Another point of discussion relates to what Christ looked like facially. Was he clean-shaven or was he bearded with long hair? While some portrayals of Christ do show him without a beard — Caravaggio’s Supper at Emmaus comes to mind — this is rare. The early depictions of Christ without beard that I am aware of are allegorical representations of Christ as the Good Shepherd. This is one from the catacombs in Rome: 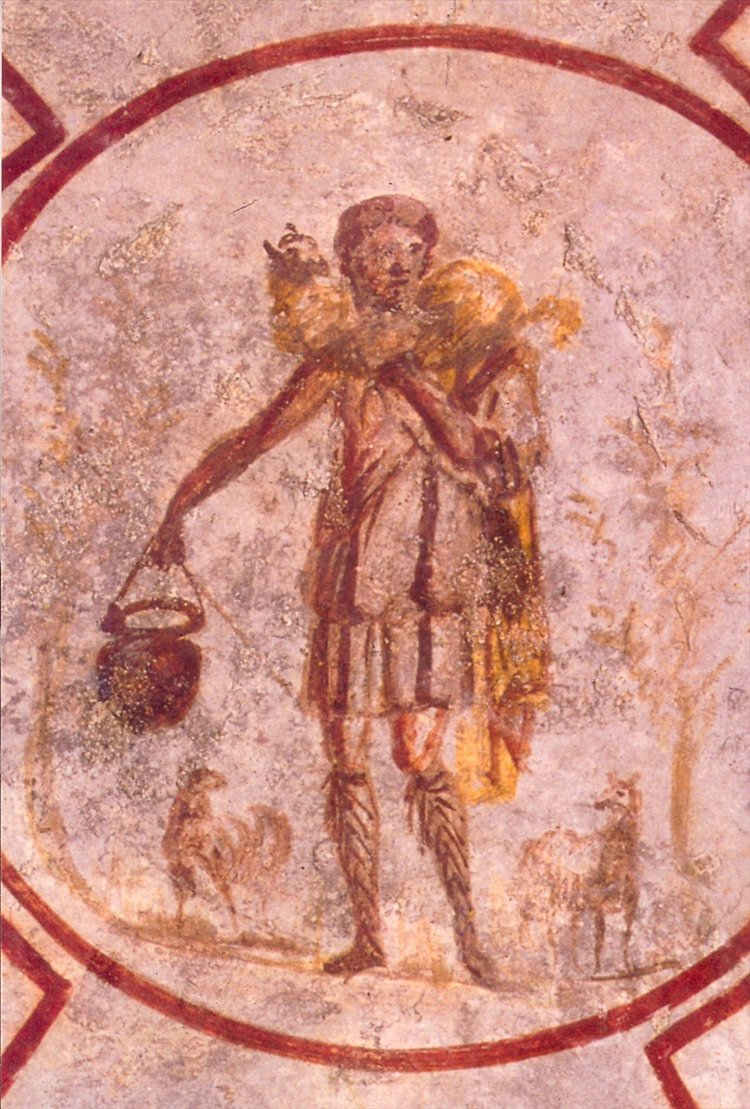 Jesus as the Good Shepherd, painted on the ceiling of S. Callisto catacomb, mid-3rd century.

Another image in the catacombs dating from the 4th century, which is not allegorical, shows Christ as the familiar bearded figure: 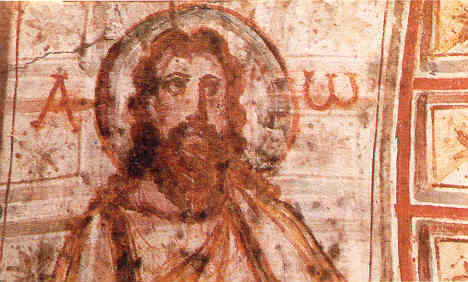 Bust of Christ, mural painting from the catacomb of Commodilla, late 4th century.

We do not know for certain what Christ looked like. However, the tradition is old enough and geographically widespread enough to cast doubt on the assertion that the familiar bearded Christ with a light complexion arises from a Western European cultural prejudice.

Furthermore as mentioned, Christ is not always portrayed as a white European, even by white Europeans. Russian icons show Christ with olive brown skin for example.

To ignore the possibility that this coherent tradition reflects what the historical Christ actually looked like is itself an example of unfair bias. It is the modern anti-Christian Eurocentric bias of some historians and commentators that refuses to consider the validity of Christian tradition as a historical record of truth, worthy of consideration alongside other sources.

And any discussion that doesn’t consider the possibility that the complexion might be lightened to indicate the transfigured heavenly Christ reflects a lack of understanding of how theology governs form in Christian art.

For my part, I am happy to trust Christian tradition in this respect.

David Clayton is an internationally known artist, teacher, writer and broadcaster who moved to the U.S. from his native England in 2009. He is currently Provost of Pontifex University, an online Catholic education platform where he has designed their unique, inaugural program, a Masters in Sacred Arts which is a traditional formation in beauty for artists, patrons of the arts and anyone who wants to contribute creatively to the transformation of the culture in the modern world. He is also Visiting Fellow at Thomas More College of Liberal Arts.