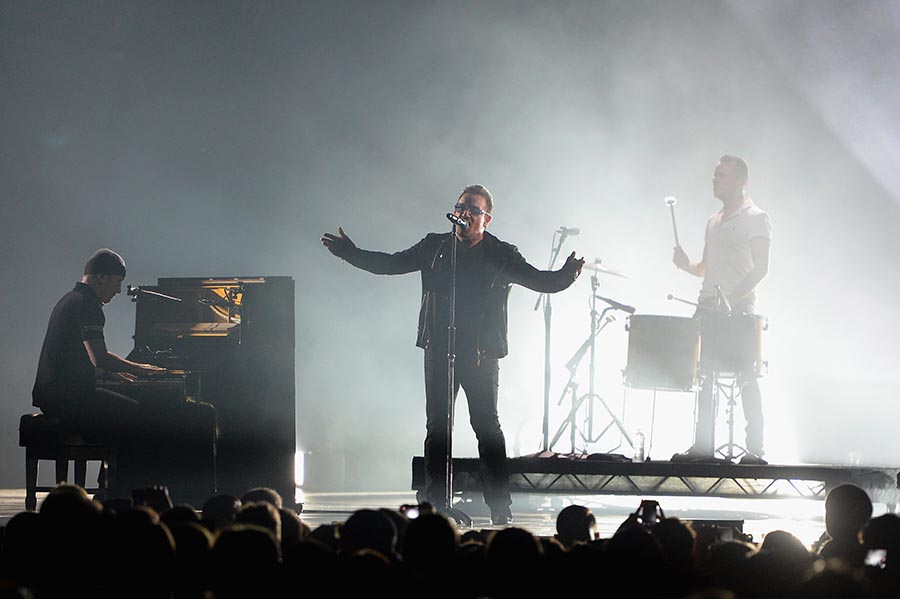 Can rock and roll lead to authentic Christian conversion? That is the question posed by David Lemley in his fascinating new book, Becoming What We Sing: Formation Through Contemporary Worship Music. Lemley, a Christian, is the assistant professor of religion at Pepperdine University.

Lesley’s answer: while some rock music has genuine expressions of Christianity, and at its best may inspire and elevate audiences, it doesn’t lead to a genuine conversion that has any kind of lasting power.

I disagree with that, but first let’s engage Lemley’s argument.

The Ordo of U2

In the best chapter in the book, “The Ordo of U2,” Lemley focuses on the music of the Irish band U2. That band, he observes, “provides a unique case study of the pop ordo in practice.” As religious scholar Martha Moore-Keish, has defined it, the term ordo describes

the basic structure of Christian worship that centers on table, font, and pulpit, and the shape of Christian living that flows from these centers. It is a commitment to that which grounds and guides our lives in the world.

In Lemley’s assessment, a band like U2, led by a believing Christian named Bono, and their spirit-infused concerts, offers a pop version of the ordo of Christian worship. “In some of their signature songs, the theological language used by the band is effective is casting broad visions of hope and human connection.” For proof, listen to songs like “I Still Haven’t Found What I’m Looking For,” “Beautiful Day,” and “Mysterious Ways.” Lemley says that “U2 offers an affective alliance in an affective site where a better world is possible and in which the listener is valued unconditionally.”

The audience, both secular and not, partakes in this pop ordo:

This is a system in which consumers are caught up in more than a simple financial transaction. American worshippers take roles in a society that communicates norms of believing, belonging and behaving through aesthetic choices, like popular music — music that is a ‘language’ beyond lyrics… . Buying and selling material goods establishes people and institutions in a network of cultural values, ethical commitments, daily practices, and social identities.

So the audience forms its own type of faith community, goaded by Bono’s cajoling to stop AIDS, forgive debt, stop war and welcome refugees.

Does Any of This Lead to Faith?

But does this lead to lasting Christian conversion? Lemley is doubtful. He says that these musical epiphanies fall far short. They avoid the hard work of love of neighbor and converting the skeptic. They skip daily, sweaty chores like raising family and fostering real community. Outside of this sphere, pop music “functions as a means of breaking away from daily domesticity, transcending by encountering a reality that is entirely out of reach and experience that does not require achievement to be effective.”

In his conclusion, Lemley is unsparing:

Pop stars are notoriously effective at advocating for humanity as a whole while publicly serving as a cautionary tale of domestic tragedy. Pop music offers a compelling invitation to become what we hear. But we cannot, through its range of idealized effective receive what we are; it does not enact what it signifies. It does not make disciples. That is not the trajectory of its liturgy … if you want to come into ethical alignment with pop music, you don’t have to love, you have to dance.

Lesley ends with this sharp debunking, a response to U2’s use to the image of Miss Syria in their concerts as a way of eliciting outrage at war:

The work for justice that Bono performs is part of his totemic role that is entirely divorced from the lived experience of the majority of participants. They may or may not feel, or consider, or give, but they most certainly, overwhelmingly, will experience Miss Syria only as an objectified symbol. She can represent only the possibility that U2’s resources can reach her, in a distant and dangerous place on a journey that would exceed most fans’ vacation time.

Beauty Will Save the World

These are strong points, but I’m not sure I agree. Music like U2’s is beautiful, and in my Catholic tradition beauty can be a doorway to the divine. In the words of Bishop Robert Barron, “Beauty gets you in the door.” Then beauty can even “seize you … and change you.” You want to pursue truth, and live in the truth. Music (U2, Talk Talk, John Coltrane), movies (Terrence Malick’s), novels (Brideshead Revisited) can also get you there.

U2’s album War came out in the winter of 1983, as I finished senior year at a Jesuit high school. I was driving my dad’s black VW beetle and picking up a buddy in Georgetown. Then “New Year’s Day”  came on the radio. I promptly stopped the car at the nearest record store to buy the album. Here was the authentic passion of rock and roll, the defiance of punk, the grandeur of Ireland, and the Gospels, all in one package. Particular great was “40,” a song whose lyrics simply quoted Psalm 40.

I was pretty rebellious in those days, at one point even declaring myself an atheist. Like a lot of today’s U2 fans, I found my love of the band did not translate into Christian action.

A Cup of Cold Water

One night a few weeks later, I got a call from one of my friends. A well-loved local priest was setting up a talk at the local parish. He needed some help setting up chairs. When I refused, my best friend blasted me. He called me a hypocrite for praising U2 and singing along loudly to “40” when I wouldn’t even help this priest toss up a few chairs. This stung, and he was right. Wasn’t there a connection between the beauty of U2 and the love of Christ? Wasn’t that what it was all about?

My shame at my friend’s righteous anger remained with me. U2’s music had opened the door, and with a prodding from my friend, I would eventually walk through and try to not just chant the choruses, but “in the name of love,” to walk the walk.