Oh, but Biden WILL do an in-person town hall in Philadelphia October 15 instead of debating Trump face-to-face. Amazing. 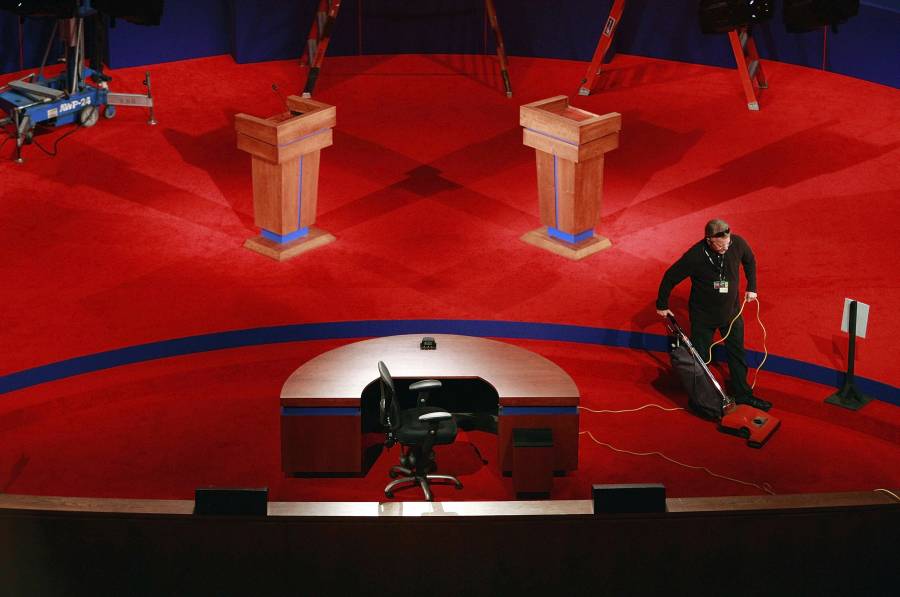 So. The 2nd Presidential Debate was scheduled for one week from today. Bowing to the wishes and dreams of the Biden campaign, the Commission on Presidential Debates decides without consulting the Trump campaign to make the 2nd debate virtual for “health and safety reasons.” President Trump is recovering from COVID, you may have heard. But Trump, as expected, says no virtual. He knows he won’t be contagious by then. But to calm fears, rational or otherwise, he offers the obvious. Why not delay the debate and the 3rd one a week? Have the 2nd debate October 22 and the final debate October 29.

“Nope,” says the Biden camp, from their basement bunker. “Donald Trump doesn’t make the debate schedule; the Debate Commission does. We accepted the three dates — Sept. 29, Oct. 15, and Oct. 22 — in June.” Uh, Donald Trump also agreed to those debates and that the 2nd debate will be held in person in Miami. However, Biden’s deputy campaign manager Kate Bedingfield, didn’t stop with a “no.” “Trump’s erratic behavior does not allow him to rewrite the calendar, and pick new dates of his choosing.” Erratic behavior? (Is he going around talking about leg hair and record players and non-existent arrests while making mildly suggestive comments to child female dancers? Talking about 200,0000,000 in the U.S. dying from COVID?)

What’s erratic about suggesting a legitimate solution to the supposed problem of health and safety? Nothing. Unless the supposed problem isn’t really the problem. Perhaps the real problem is Joe Biden is either incapable or too intimidated to be on a stage again with Donald Trump, even with a friendly moderator who used to be his intern. The same Joe Biden that boasted about wanting to take Trump out back of the schoolyard.

And now we have confirmation of that. Joe Biden won’t debate Donald Trump in person October 15. But he will do an in-person ABC “town hall” October 15 in Philadelphia! We have seen enough town halls the past month to know what that means. Fawning softballs for Biden from “undecided” voters who happen to ask the very questions the DNC would want asked.

If Joe Biden can do an in-person town hall in Philadelphia, he can debate Donald Trump October 15 in Miami.

There is no arguing Eric Trump’s reaction: “What a coward.”

So Biden refuses to debate @realDonaldTrump face to face but will appear in person for a town hall. What a coward. https://t.co/CmQB6u13Iy

Any bets on whether Trump announces he’s going to Philadelphia October 15?

In a stunning move, the Commission on Presidential Debates unilaterally decided one week out that the next presidential debate will be virtual. President Trump responded by saying he won’t participate.

The Debate Commission announced the news with a short statement. (Which might as well have been on Biden campaign stationary.)

In order to protect the health and safety of all involved with the second presidential debate, scheduled for October 15, 2020, The Commission on Presidential Debates (CPD) announced the following today:

The second presidential debate will take the form of a town meeting, in which the candidates would participate from separate remote locations.

An angry Trump told Fox Business Channel, “I’m not going to waste my time on a virtual debate. It’s not what debating is all about. … It’s ridiculous.”

The Trump 2020 campaign echoed the sentiment in statement:

For the swamp creatures at the Presidential Debate Commission to now rush to Joe Biden’s defense by unilaterally cancelling an in-person debate is pathetic. That’s not what debates are about or how it’s done. Here’s the facts: President Trump will have posted multiple negative tests prior to the debate, so there’s no need for this unilateral declaration. The safety of all involved can easily be achieved without cancelling the chance for voters to see both candidates go head to head.

We’ll pass on this sad excuse to bail out Joe Biden and do a rally instead.

Does anyone else find it awfully coincidental that the morning after Mike Pence destroys Kamala Harris in a debate that the “debate commission” unilaterally changes the format to obviously benefit Basement Biden?

Biden, of course, was ecstatic at not having to leave his basement and teleprompters and compete with Trump head-to-head unaided. His campaign said Biden “looks forward to speaking directly to the American people and comparing his plan for bringing the country together.”

A Gift for Joe

Truth be told, Biden was already looking to bail on the second debate. He said the other day he wouldn’t debate unless he was assured it could be done safely. More tellingly, Biden said the debate should be cancelled if Trump “still had COVID.” He did not say postponed.

So, with a full week to go before the scheduled debate and the President well on his way to being fully recovered, the Presidential Commission on Debates has just given an enormous and shameful campaign contribution to Joe Biden. It is a disgrace.