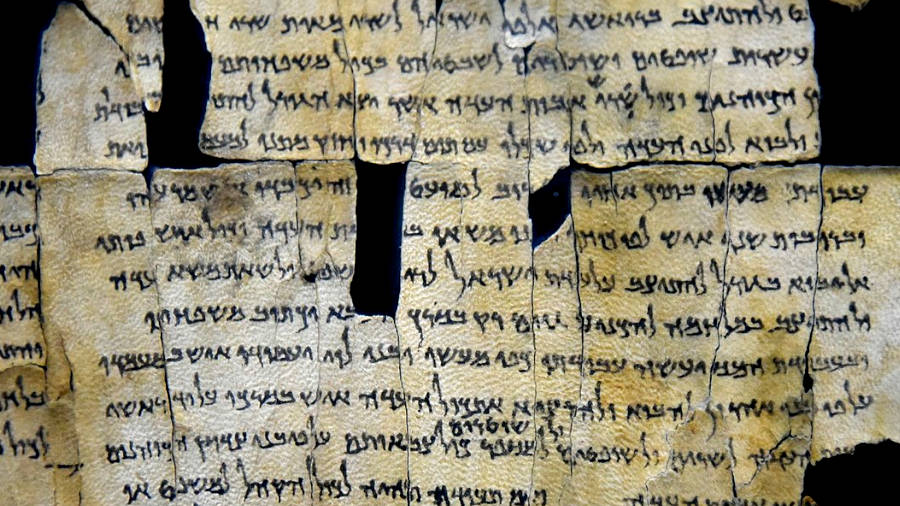 About two thousand years ago, a holy man arose among the Jews of Palestine. He gathered disciples around himself. He founded a community based on what he called “the new covenant” between God and Israel. Entrance to this group was through a ritual of water washing in which the Holy Spirit forgave one’s sins. After the death of the founder, the community continued to celebrate a daily meal of bread and wine. They awaited the return of the Son of David and the coming of the kingdom of God.

The story sounds familiar. But I’m not talking about Jesus and the Church. The holy man here is a mysterious figure known as “the Teacher of Righteousness.” The group he founded made its home at a place called Qumran on the northwest shore of the Dead Sea. Thousands of years later, in the caves around Qumran, we would find the remains of their library. We call them the “Dead Sea Scrolls.”

How could two such groups arise at about the same time in the land of Israel? And how are they related? Did Jesus imitate the men at Qumran? Is Christianity a “copycat” religion? Or is there more to the story? Those are some of the questions I address in my new book, Jesus and the Dead Sea Scrolls: Revealing the Jewish Roots of Christianity.

For modern readers, the Dead Sea Scrolls shed light on the time of Jesus and the early growth of the Church. The Scrolls are the only Jewish texts still in existence that were physically copied during the lifetime of Jesus or even earlier.

After nearly twenty years of studying and teaching about the Scrolls, I’ve become convinced that they illuminate many passages of the New Testament that are otherwise confusing. They help us to see how many of the beliefs and practices of early Christianity are much more firmly rooted in Judaism and the Old Testament than we’ve thought. This material can also help debunk a great deal of misinformation that circulates in academia and popular culture.

The beliefs, teachings and practices of early Christianity are much more firmly rooted in Judaism and the Old Testament than we have generally recognized.

Consider, for instance, the claim that large parts of the Gospels must have been invented by second and third generation Christians and then written back into the life of Jesus. While few practicing Christians believe this, many scholars do. Scholars used to date the entire Gospel of John used around A.D. 160. They did not believe its language or its picture of Jesus could have been composed by a Jew of Jesus’ own lifetime.

The discovery of the Scrolls contradicted that view. Many began to realize that the Gospel of John, out of all the New Testament books, has the most similarities in language and concepts with these pre-Christian Jewish documents from the Dead Sea! For this and other reasons, many academics now agree that, at the least, the Gospel of John was written by a Jew who lived in the land of Israel close to the lifetime of Jesus.

The Scrolls also verify and illuminate many little historical details in the Gospels that we often overlook. For me, these little details are some of the best evidences that the gospels are rooted in history. Some fraudulent writer of a later age may be able to consult the standard histories and write a fictional story that gets the names and dates of major events correct. But it’s much harder to fill out the story with small, authentic details of the local time and culture whose meaning most readers will miss. Yet that’s just what we find in the Gospels.

The Scrolls, as documents roughly contemporary with the Gospels, also help us grasp certain historical events. Take John the Baptist’s strange diet (Matt 3:4). Or the significance of Peter and John finding a man carrying a jar of water (Luke 22:10). Or the young man wearing only a linen garment at Jesus’ arrest (Mark 14:51-52). Or Jesus’ spitting on the ground to heal the man born blind (John 9:6). The scrolls help explain each of these episodes.

It’s easy to miss these little touches to the Gospel narratives. But, as I argue in the book, these only make sense in the late Jewish culture in land of Israel during that narrow window of time from about 100 BC to AD 70.

The purpose of my book is to spell out how the Scrolls shed light on the origins of the Christian faith. I begin with an overview of the discovery and contents of the scrolls, and then organize the rest of the book around main practices of early Christianity. For example: Baptism, Eucharist, Matrimony and Holy Orders. Most modern readers don’t know that the pre-Christian Essenes organized their life around a Spirit-filled water-washing and a sacred meal of bread and wine. Their views about marriage were much like Jesus’. The governance of their community could evoke déjà vu in anyone who’s studied the early Church Fathers.

The concluding chapters of my book explore the possible link between the Essene movement that left us the Scrolls and the early Church. Are these parent-child movements, or more like two siblings?

Of course, these questions are not merely academic. The founding of Christian is a staggering event. Over two billion people — about one in every three on the globe — claims some kind of relationship with a two-thousand-year-old Jewish teacher from Nazareth named Jesus. All these people have inherited from Jesus certain practices, like sacred washing in water (Baptism) and a ritual meal of bread and wine (Eucharist). But there’s wide disagreement about what these practices mean.

I myself am something of an American Christian “mutt.” I worshiped in a variety of churches in my upbringing. In some churches I belonged to, baptism was an optional, symbolic profession of one’s faith in Jesus performed by adults. In other churches, baptism was an infusion of the Holy Spirit necessary for salvation, and was performed on infants. I have been in churches where communion was a quarterly ceremony in which Wonder Bread™ and grape juice were eaten to remember Jesus. In other churches the holy sacrifice of Calvary under the appearance of bread and wine was the central act of every worship service.

Most Christians sense that these disagreements are at best sad and at worst tragic. The Scrolls aren’t going to resolve them. But they can help us better grasp the faith of Jesus, the Apostles, and the first generation of Jewish Christians. My hope is they may become common ground, or at least a common starting point, for us to move toward unity in our faith and practice.

Adapted and revised from the introduction to John Bergsma’s book, Jesus and the Dead Sea Scrolls: Revealing the Jewish Roots of Christianity.

Dr. John Bergsma is Professor of Theology at the Franciscan University of Steubenville, where he has taught Scripture since 2004. He holds the B.A., M.Div. and Th.M. degrees from Calvin College and Seminary (now Calvin University) and a Ph.D. in Biblical Studies from the University of Notre Dame (Indiana). He has authored eight books on Scripture and related subjects, including A Catholic Introduction to the Bible: Old Testament (with Brant Pitre, Ignatius 2018).