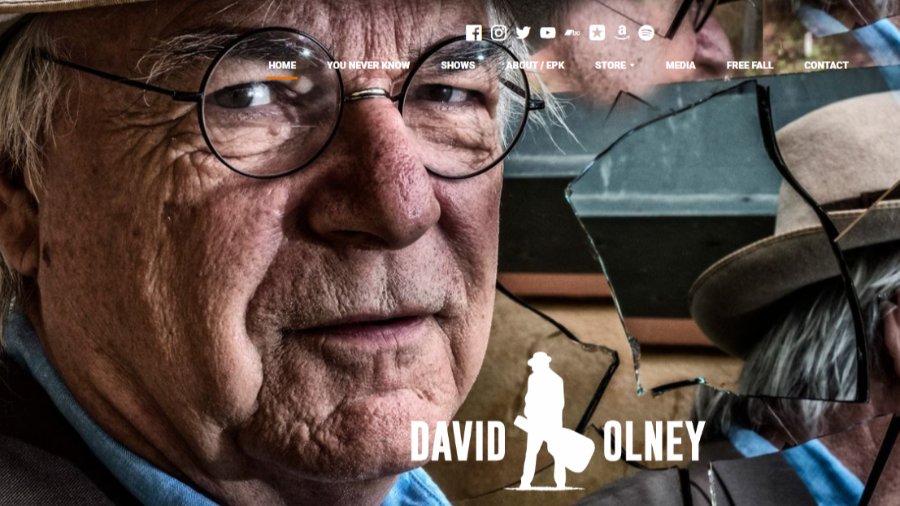 “Olney was in the middle of his third song when he stopped, apologized and shut his eyes. He was very still, sitting upright with his guitar on.” Amy Rigby, who was performing with him, describes the death on stage Saturday night of the singer and song-writer David Olney. “At first looked like he was just taking a moment.”

I suspect maybe no one reading this has heard of him. Stars like Emmy Lou Harris, Linda Ronstadt, and Del McCoury sung his songs. But he wasn’t a huge star. (Here’s a short biography from his website. And here’s a profile from five years ago that fills out the story.) He was 71 when he died.

Olney wrote some of the wisest biblical songs you’ll ever hear, but in the world of mainstream music. No one would call him a “Christian artist.” He didn’t travel in those circles. I’m not entirely sure what he thought about Christianity, but he brought the good news to people who might not have heard it if he didn’t sing about it.

Just listen to the opening and closing songs from his album The Stone. He put it out in 2012. The six songs describe six characters from the week before Easter. They include the donkey, Judas, Barabbas, and an unnamed disciple looking back. And a conman and a centurion. Those two songs by themselves, wow.

He’s put them first and last, and matched them lyrically and musically. In “Jerusalem Tomorrow,” a conman talks about finding Jesus had done the real miracles and no one cared for his tricks anymore. He goes looking for his competitor. Jesus invites him along. The song has a hard kick at the end.

In “A Soldier’s Report,” the centurion in charge of guarding the tomb has to tell Pilate the body is gone. He’s embarrassed, baffled — and worried because he knows that empty tomb means something. The song ends with another hard kick.

The first song points to the last. The last points back to first. And they point to Jesus.

I haven’t heard all his albums. In the ones I have heard, biblical stories keep popping up. His 2000 album Omar’s Blues includes three songs about David. In one, David tells the story of fighting Goliath. The amusing chorus begins, “If I’d have known I couldn’t do it, you know I never would have even begun.” In the second, the proud and lustful king demands Bathsheba’s favors. In the haunting third song, he laments the death of his son Absalom, and regrets ever wanting to be king.

A couple of years ago I heard Olney perform at a tiny little music club. He performed in what had been a family’s living room, in a house turned into a hotel for traveling musicians. I got to hear him from eight feet away. He and his bass player played two long sets. In between them, we talked for a bit. He was kind.

He was pleased when I said that I’d come to his music through Emmy Lou Harris’s performance of “Jerusalem Tomorrow,” on an album I picked up for a dollar at a thrift store. I’d loved the song and read the liner notes to find out more. “That’s one of my favorites,” he said.

A Kind of Christian

David Olney seems to have been a Christian, though maybe a lapsed one. I haven’t sussed out his beliefs. In one interview he talked about his song “When the Deal Goes Down.” It includes lines like “You don’t have to raise the dead. Give me wine or give me bread. Just tell me you’ll be there when the deal goes down.”

“Christianity, through the accident of geography, is the religion I deal with,” Olney says. “When I got hit by that pickup truck, I just needed to know that it had meaning.”

Speaking of the religion, he says, “There’s an emphasis on the virgin birth, and all that stuff — those are parlor tricks. At the crisis points in your life, that’s not what people need. People need to feel their life has meaning and that they’re loved and accepted when the deal goes down.” I don’t think he meant “parlor trick” the way it sounds. I think he means the way Christians can use them, when what most of us want most is to know that God loves us and the world means something, even when life goes bad.

The singer didn’t claim to have the answers. He could be ironic about himself. He adds: “That was a song giving helpful advice to God about how to run the universe.”

When he describes The Stone on his own website, he doesn’t commit himself. “Something happened. Back there all those centuries ago. Something not easily believed or easily dismissed,” he writes. “But nothing comes of nothing. Something happened. The Stone is an attempt to address those events. From varying points of view (a con man, a donkey, a murderer and a soldier), a story is told. A picture struggles to emerge. Nothing is proved. Nothing is denied.”

We Need Not Fear

Nothing is proved. But something is proclaimed. In the song “Flesh and Blood” from The Stone, the unnamed disciple remembers the Last Supper. (You’ll want to listen to it to get the full effect as a song.) Jesus says goodbye to His friends. “The time has come for me to leave. Do not despair and do not grieve. The path is clear. The way is shown. You need not fear, you’re not alone.”

At the end of the song, the disciple says, “The seasons pass, the ages roll. Kingdoms rise and kingdoms fall. Day to night and night to day, all earthly glory fades away.”

But that’s not the last word. The last word is Jesus’s. “But now the table’s set and he calls once more, the bread to break, the wine to pour. Whatever heartache we have known, we need not fear, we’re not alone. Flesh and blood, the soul of man. He lived and died. He lives again.”

Rest in the peace of the risen Jesus, David Olney.

A Great Album for the Week Before Easter, and the Week Virus Deaths Rise

Joshua Harris and the Dangers of Young Celebrity Christianity