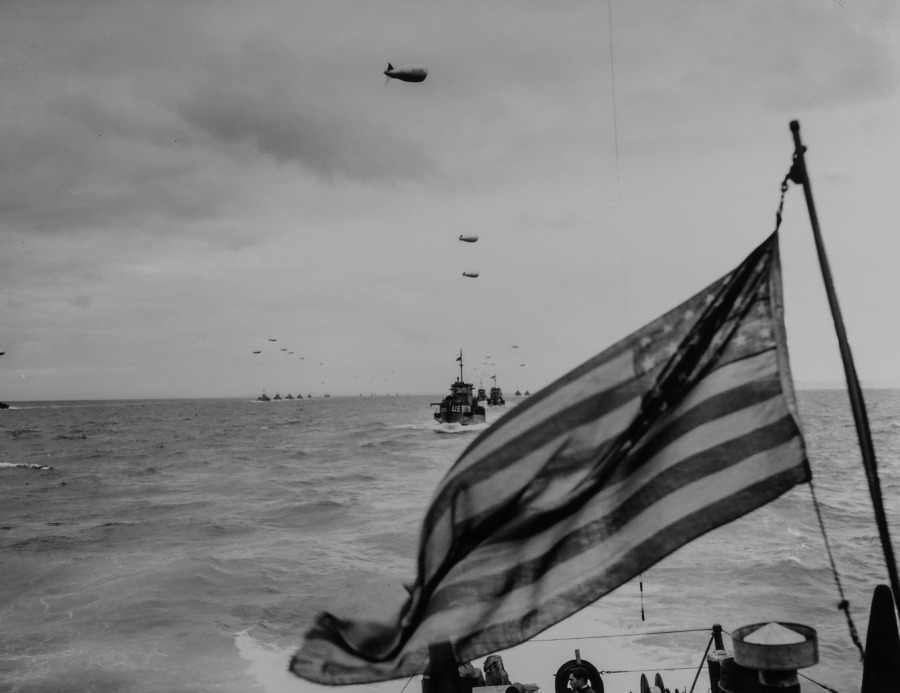 75 years ago today, Allied troops embarked on one of the most significant endeavors in human history: D-Day, the massive invasion at Normandy to liberate Europe from the grip of Nazi tyranny.

These images recount that unforgettable day, and the triumph of freedom.

Preparing for the Big Assault

The official plan for D-Day was to deploy every available resource in an all-out assault on the Nazi-held coast of Normandy, France. So there was a lot of work to be done in preparation. Original caption: June 1944 — These American troops are marching through the streets of a British port town on their way to the docks where they will be loaded into landing craft for the big assault. Original caption: June 1944 — Men and equipment are massed together in landing craft in preparation for the big assault on the European continent. England. Original caption: June 1944 — View of an LCT with American troops and equipment loaded aboard awaiting the signal for the assault against the continent.

To ensure the success of the Normandy Invasion, the Allied Forces took on a massive deception campaign, called Operation Fortitude. Fake bases and inflatable tanks, trucks and planes were set up to intimidate the Nazis and divert their attention and forces away from Normandy. Original caption: May 20, 1944 — Fifth Army. Anzio Area, Italy. Dummy tank designed by British, made of rubber and inflated when used. Can be assembled in 20 minutes. When used in field can simulate tank positions. Inflating the turret assembly with the forge pump. In the background can be seen the fully-inflated body assembly with is resting on its side in order to show the air-tube supporting framework. Photo by: Gallagher Original Caption: May 20, 1944 — Dummy tank designed by British, made of rubber and inflated when used, can be assembled in 20 minutes. When used in field can simulate tank positions. Comparison between United States Army medium tank, Mark IV, and the completely inflated and assembled dummy which is slightly smaller. Photo by Gallagher, 163rd Signal Photo Company

When the Day Arrived

When the day arrived to launch the assault on Normandy, Gen. Dwight D. Eisenhower made sure to give a hearty, inspiring send-off. His message was simple: “Full victory — nothing else.” Original caption: June 6, 1944 — Gen. Dwight D. Eisenhower gives the order of the day, “Full victory, nothing else,” to paratroopers somewhere in England just before they board their planes to take part in the first assault of the invasion of France. England.

Even the soldiers who couldn’t see Gen. Eisenhower in person had a letter with his orders for the day. The letter read, in part, “You are about to embark upon the Great Crusade … I have full confidence in your courage and devotion to duty and skill in battle. We will accept nothing less than full Victory!” British soldier aboard ship reading General Eisenhower’s Order of the Day on the way to Normandy, France.

The first waves of the Normandy Invasion faced treacherous conditions. Just to get to land, the men had to wade through waist-deep water amidst heavy and devastating gunfire. Original Caption: Down the ramp of a Coast Guard Landing barge Yankee soldiers storm toward the beach-sweeping fire of Nazi defenders in the D-Day Invasion of the French Coast. Troops ahead may be seen lying flat under the deadly machine gun resistance of the Germans. Soon the Nazis were driven back under the overwhelming Invasion forces thrown in from Coast Guard and Navy amphibious craft. But the Allied Forces pressed on and quickly began taking over the beach. Original caption: Men and assault vehicles storm the beaches of Normandy as allied landing craft make a dent in Germany’s West Wall on June 6, 1944. As wave after wave of landing craft unload their cargo, men move inland and vehicles surge up the roads. Note the men swarming over the beaches.

So many brave men were lost in the initial assault. And so any were injured. Original Caption: American Medics render first aid to troops in the initial landing on Utah Beach. Les Dunes de Madeleine, Northern Coast, France. In the background other members of the landing parties dig into the soft sand of the beach. June 6, 1944. Help is On the Way

But reinforcements kept coming, and the Allied Forces kept on taking ground. American assault troops in a landing craft huddle behind the protective front of the craft as it nears a beachhead, on the Northern Coast of France. Smoke in the background is Naval gunfire supporting the land. June 6, 1944. Original caption: It’s Their Turn Now — American reinforcements, eager for their shot at the retreating Nazis in Normandy, pile from a Coast Guard landing barge into the surf on the French coast. Hardened for battle, they are going in to reinforce and replace the fighting units that secured the Norman beachhead and spread north toward Cherbourg.

Back in America, pews were filled and streets crowded as people awaited the news of how their loved ones fared. June 6, 1944 — A group of women enters the synagogue on West Twenty-third Street in New York, New York, which stayed open all day on D-Day. June 6, 1944 — People stopped in the street to watch an electrical news sign on the Times Building in Times Square, New York, New York.

Though the battle was hard and many lives were lost, the day was won. The Invasion of Normandy, 75 years ago today, was a crucial victory and turning point in the war against the Nazis. And an historic, monumental victory for freedom. Original Caption: Supplies Pour Ashore for Invaders of France — This striking panorama of the French invasion beach was made by a Coast Guard combat photographer from a hillside cut with the trenchs (foreground) of the ousted Nazi defenders. The channel waters are black with shipping, as reinforcements and supplies are funneled ashore for the conquest of the Cherbourg Peninsula. Balloon barrages float overhead to protect the ships from low-flying enemy strafers. One balloon rests on the deck of an LST. Headed inland are long parades of trucks, loaded with troops and supplies. Original Caption: American soldiers march a group of German prisoners along a beachhead in Northern France after which they will be sent to England. June 6, 1944. Original Caption: Old Glory Moves to New Glory — Columns of Coast Guard LCI’s, protected by barrage balloons against low flying Nazi strafers, advance upon the beaches of France in the wake of the Stars and Stripes. A Coast Guard combat photographer, going into the invasion on an LCI, caught this picture of the advance guard of the Liberation Fleet in the English Channel. The beachhead is secure, but the price was high. A Coast Guard Combat Photographer came upon this monument to a dead American soldier somewhere on the shell-blasted shore of Normandy, ca. June 1944.

Greater love hath no man than this, that a man lay down his life for his friends. God bless those who paid the ultimate price on D-Day.

Trump, Macron Give Thanks for Sacrifice, Bravery on 75th D-Day Commemoration