A curious lawsuit in Nevada demonstrates the destructive madness of Critical Race Theory in education.

Should Critical Race Theory training be a requirement for high school graduation? That’s the gist of a weird lawsuit pending in Nevada. Gabriella Clark, a black woman, has sued Democracy Prep Charter School on behalf of her son William, a high school senior. William has green eyes and blondish hair, as his deceased father was white. William is regarded as white by his peers.

The lawsuit has to do with a class called Sociology of Change. It’s a yearlong mandatory class for seniors at Democracy Prep high school. According to the lawsuit, the course required students to reveal their race, gender, sexual orientation, and any disabilities. Each of these strands of information was put into one of two buckets: privilege or oppression. The court filings say, “William Clark was compelled to participate in public professions of his racial, religious, sexual, and gender identities, and would be labeled as an ‘oppressor’ on these bases.”

Democracy Prep is a network of public charter schools. Based out of New York, they operate 21 campuses throughout the country, with a total enrollment of about 6,500. Their Executive Director Adam Johnson, a co-defendant in the Clarks’ lawsuit, gave a presentation in December to the charter school board on the school’s commitment to equity. Around that time the school unveiled a five-year strategic plan naming anti-racism as its top priority.

So what’s being presented in this Sociology of Change course? Journalist April Corbin Girnus has published a few screenshots shown to the class:

Perhaps the Google Doc is only visible to the teacher. But the demographics of William’s school are 63.8 percent Black, 30.2 percent Hispanic and 2.2 percent white according to the state’s K-12 data portal. In an e-mail to the charter school’s board of directors, Gabriella Clark wrote that her son is the only white student in the class. Clark wrote, “This teacher is blatantly justifying racism against white people thereby putting my son in emotional, psychological, and physical danger.”

Meanwhile those in minority groups — almost all of them — are told to unlearn internalized beliefs that stem from oppression. Positive thinking and resiliency are tremendous assets for overcoming adversity. But notice the emphasis on doing this within a given group, supporting that group’s leaders and history. This doesn’t bring people together; it separates us into tribes: 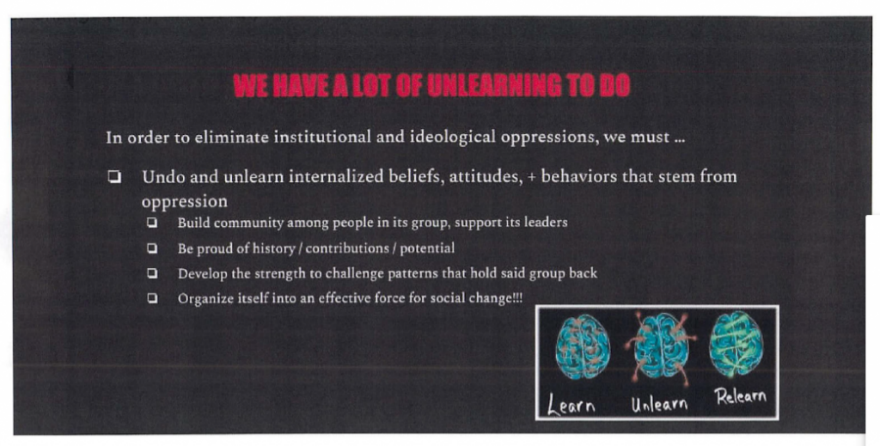 There is nothing racial about being a successful student. There’s not a uniquely Black way or Hispanic way to succeed. Hard work, personal discipline, delayed gratification, paying attention in class — these things work universally.

This next one is the real doozy:

The family reinforces racist homophobic prejudices? Sure. Having a stable nuclear family is among the best predictors of a teen becoming socially competent and well-adjusted to society. That is, less likely to be sociopathic or violent towards others. Religion is bad, too? How well has atheism fared in world history? Stalin, Mao, Hitler, and so on.

I love that this lawsuit was brought by a black woman on behalf of her white son. Gabriella Clark repeatedly sought an accommodation for William. The school refused. William got a D- for his lack of participation in the class, a grade that puts his graduation at risk. Clark reached out to an education activist and later retained New York-based attorney Jonathan O’Brien. A variety of groups are assisting in the suit. Just days ago, O’Brien won a preliminary injunction in the case.

They’ve framed it as a First Amendment issue, with a twist. You can’t compel this kind of speech. As Clark says through her attorney: “A school cannot, under the guise of ‘curriculum,’ invade its students’ consciences and require them to affirm beliefs they find repugnant.”

I don’t mean to suggest that all implicit bias training is inherently divisive. I’ve received some myself. It was done in a way that didn’t come close to suggesting that all whites were oppressors. It exposed me to the way many black or brown Americans have experienced suspicion in certain settings, and how those experiences have impacted them.

In a fallen world, some racism towards minorities will persist until Jesus returns. It’s a sad and evil reality. We should grieve and oppose it. By teaching our children and others that we’re ultimately one human race made by one God, we can shame racism, isolate it, and push it far out of the mainstream.

But we shouldn’t pretend that we haven’t made tremendous progress, either. What Rev. Martin Luther King dreamed, this generation was living. It’s harmful to send a message of victimhood to minorities, to suggest they should wait for a more perfect society before striving to reach their potential. Or that they need special accommodations to get there.

Yes, look at the legacy of those who succeeded in more difficult times — under Jim Crow laws — and be inspired. But don’t isolate yourself within a demographic identity; see yourself as a human, and as an American, first. Embrace that America is a melting pot. Work hard, play by the rules, and know that almost every white person views you as a fellow human more than anything else. Your success will be welcomed and applauded. Now more than ever.

Critical race theory (CRT) pits us against each other. It’s divisive. It’s un-American. As sinners in a fallen world, each of us has been oppressed and each of us has oppressed. We’ve all received evil and we’ve all done evil. Regardless of our ethnicity. As Alexander Solzhenitsyn said: “The line separating good and evil passes not through states, nor between classes…but right through every human heart — and through all human hearts.”

A Christian group worth knowing about is the Center for Biblical Unity, founded by Monique Duson. Ms. Duson affirmed CRT for two decades before seeing its inconsistency with historic Christianity. So she knows the stuff inside and out. At the top of their website are three key phrases: One Race, One People, One Savior.

That sums it up well. We’re all humans. We’re all sinners. We all need Jesus. And in Jesus, the walls of division between races, classes, and genders, ultimately crumble.