Streaming TV series Vindication brings faith into the world of crime drama. Produced for a fraction of what most series cost, the Texas-based show has lofty aspirations. 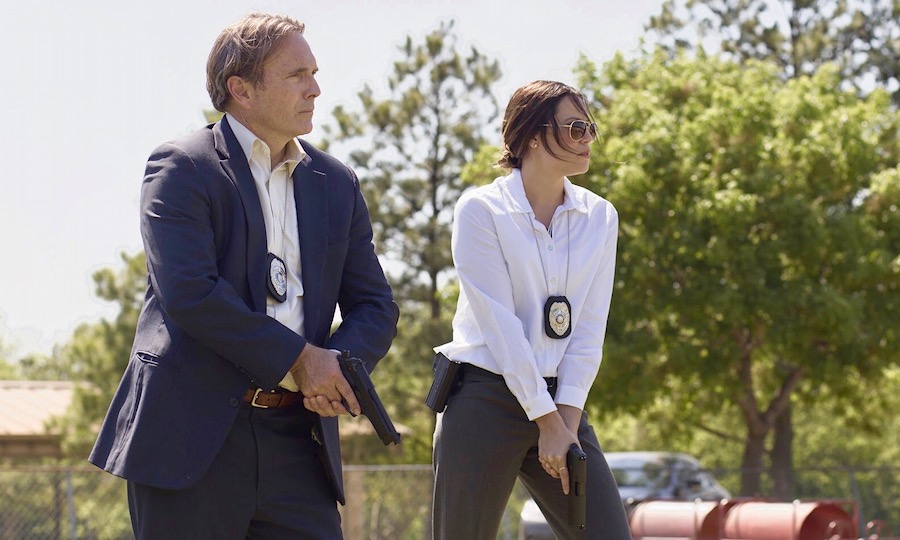 Fans of CSI and True Detective have, in recent weeks, begun to discover a new crime drama series on one of the world’s top streaming video services.

Since its August 9 premiere on Amazon Prime Video, Vindication has racked up an audience of tens of thousands. In ten half-hour episodes set in north Texas, veteran police investigator Gary Travis deals with criminal activity he’s never before seen in decades on the force.

“Detective Travis is a bit worn out and a curmudgeon at times, but he is seeking the truth,” says lead actor Todd Terry. He has previously had recurring roles on hit TV shows Breaking Bad, ABC’s American Crime, and Walker, Texas Ranger.

“When he comes up against hard things in his own personal life, it forces him to take a look at the spiritual side of things and what he’s missing,” adds Terry.

Grappling with religion may seem incompatible with casing a crime scene. Yet whether a homicide investigation or sting operation, Vindication injects deeper questions into the drama.

The series co-stars Peggy Schott as Travis’ wife, Emma Elle Roberts as his daughter, Steve Mokate as the police department sergeant, and Venus Monique as a police detective trainee working under Travis.

“Even if you’re not interested in God at all, the storylines in Vindication are super intriguing,” says Monique.

“This series is not afraid to address heavier topics — we can’t avoid the evil that’s in the world.”

“I love crime dramas — the suspense, the thrill, putting all the pieces of the puzzle together. Jarod made it in a way that’s interesting and brings reality to the screen.”

Monique refers to 37-year-old Jarod O’Flaherty, a self-taught filmmaker who has worked on Vindication for the past four years.

“I have never had any type of professional film training,” says O’Flaherty, owner of a digital media company in the Dallas/Fort Worth area.

Along with his ‘side project’ as writer and director of a crime drama, he develops websites and produces commercial videos. His film endeavors started small.

Values at the Center

Vindication represents counterculture Hollywood in several ways. The talent are affiliated mostly with smaller faith-based productions — and not by accident.

“When I first wanted to go into acting, I wrote down a list of things that I won’t do on-screen like nudity,” says Monique.

“In commercials, I won’t promote alcohol, cigarettes, or lingerie. My whole reason for wanting to act is to bring God glory and point people to him.”

In contrast to other Christian entertainment, the series rejects preachy dialogue.

“People will criticize and have different scales,” says O’Flaherty. “Some say, ‘You need a full Gospel presentation’ to reach people. But this isn’t a series where someone’s going to kneel in front of their TV and dedicate their life to the Lord.”

He says his approach is “about planting seeds,” a reference to First Corinthians 3.

“Hints of truth come in raising questions or maybe a simple prayer,” says O’Flaherty. “We scatter seeds that a neighbor, a friend, a coworker, a pastor, or whomever can come along and water.”

“Look at streaming television these days,” says the veteran actor. “You cannot get away from gratuitous content. What I appreciate about this series is that it is not gratuitous whatsoever.”

He continues: “It’s not afraid to address heavier topics — but we can’t avoid the evil that’s in the world. It’s there, and we have to talk about it with our kids.”

“For years, I volunteered with my church youth group and filmed short videos,” says O’Flaherty. “Then HD cameras became more accessible to consumers around 2008, and I started doing more.”

Retta Baptist Church in Burleson, Tex. co-funded his feature film My Son, a family drama released in 2013. They were supportive when O’Flaherty wanted to dig deeper for his next project.

“While growing up in church, I didn’t necessarily have the cleanest story,” he says. “I had some time away from the church and experienced the ugliness of the real world. That’s a part of how I approach storytelling.”

Produced in 2015 as a short film, the pilot of Vindication deals with murder and marital infidelity. O’Flaherty scored a few well-known actors, notably Terry and Ben Davies (Overcomer). They elevated the low-budget production, which filmed in improvised locations around Fort Worth and Burleson.

The writer/director screened the pilot for several potential partners. One Christian festival rejected it for going “too far” in explicit content. When another notably conservative competition accepted it, the film won top honors.

“We’re not too edgy that conservative Christian groups don’t want anything to do with Vindication,” says O’Flaherty.

“But at the same time, we’re pushing the boundaries a little bit. It’s not too safe that people outside the church look at it and say, ‘This is cheesy, fake, and G-rated in an R-rated world.’”

Following the festival circuit in 2016, Vindication landed a distribution deal — with an order for additional episodes.

An actor for the past 25 years, Terry compares the series to Blue Bloods with its dual plotlines.

“Each episode of Vindication centers on a crime, similar to other procedural shows,” says Terry. “It’s also a family drama. You not only see what goes on at work, but his family is involved and sometimes intersects in the storylines. It brings more heart to the show.”

Having appeared in several roles shot near her hometown of Austin, Tex., co-star Monique has emerged in recent years. Throughout the series, the young officer serves justice to a few lawbreakers.

“Our firearms instructor Caleb [Phipps] was also choreographer for the fight scenes,” says Monique. “It was fun but a lot of bruising. In rehearsals, we learned to make it real in our faces, our bodies, and the timing.”

Even with careful choreography, the actors sacrificed to make the action look realistic. Monique recounted a climactic sequence facing off against multiple large thugs. “We shot that maybe a dozen times from different angles,” she says. “It was repeat, repeat — hitting those same bones, bruising those same muscles. After that fight scene, we all were nice and swollen.”

With a cast and crew local to north and central Texas, Vindication followed a unique shooting schedule. Roughly every six weeks, they would reassemble once a new script was ready.

“Season one was produced over a period of two years, off and on,” says Terry. “A lot of it was filmed during football season, and all the guys wanted to watch the Cowboys games. Working on scenes, we’d have to stop, watch a play, and then start filming again.

“It was kind of funny, but you do what you got to do to get your Cowboys in!”

Next Chapter in the Works

Todd Terry contrasts Vindication with major network shows he has acted in for much of his career.

“On those big-budget series, people come in, do their jobs, then get out,” he says. “Everybody has become a family on Vindication. It makes for a much better project when you see the same crew every time, and everyone is working hard to make something special.”

Others in the cast, like Venus Monique, consider this series their big break — and a dream job.

“This just wraps up the entire present I ever wanted in a film role,” she says. “It’s a crime drama and faith-based. My character is physically active — I have some fight scenes and I get to use a gun. And it’s all for God’s glory.

Audiences may wonder how a small-town web designer seems to have a working knowledge of police procedures.

“I have a brother-in-law who is a detective in law enforcement,” says O’Flaherty. “I occasionally bounce ideas off of him to make sure they are plausible and realistic.”

“I experienced the ugliness of the real world. That’s a part of how I approach storytelling.”

Cast and crew alike are optimistic season two will be produced. The writer/director notes that spreading the word on social media and writing a review on Amazon can help make it happen. He also hopes viewers watch the entire season, which elevates it on Prime Video.

“One reviewer called our series a ‘slow boil,’” says O’Flaherty. “I like that description. Before reaching the bigger conflicts, viewers have been through these slower, get-to-know-them, see-how-they-act moments.

“It makes the moments at the end of the series more powerful. Because once it gets hot, it really moves.”

Rated TV-14 for mature themes and some violence, Vindication is streaming now on Amazon Prime Video. Explore The Stream’s complete TV coverage and sign up to receive top stories.