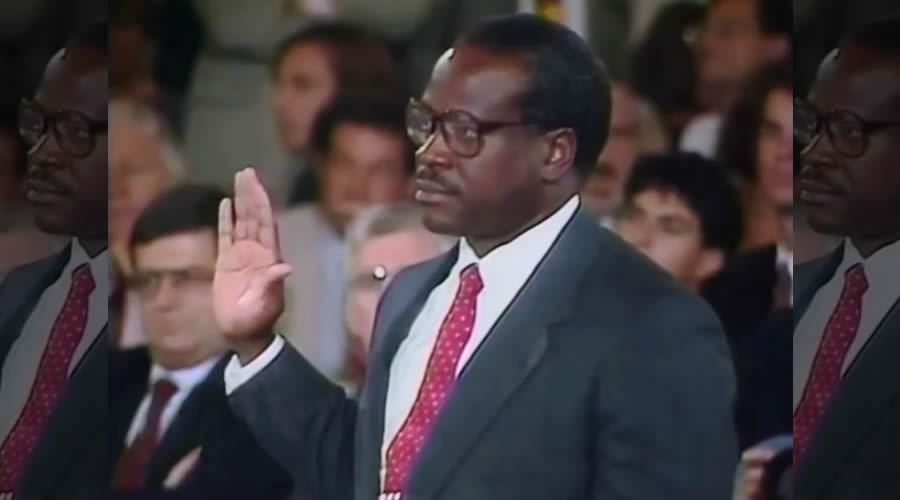 A new documentary about the life of Supreme Court justice Clarence Thomas is out in theaters today.

The documentary by Manifold Productions is called Created Equal: Clarence Thomas in His Own Words. Michael Pack, founder of Manifold, interviewed Justice Thomas and his wife Ginni for over 30 hours.

In the film, written, produced and directed by Pack, Justice Thomas relives the highs and lows of his life. In an interview with The Stream, Pack stressed the importance of telling the entire arc of Justice Thomas’s life.

“I think what is inspiring about Justice Thomas is that he surmounted many obstacles and he had all this resilience and that in the end he was really sustained by solid principles and faith that he got from his grandfather and the Irish nuns who taught him in Catholic school. But you can’t appreciate it if you don’t see the ups and downs.”

A core piece of the story involves Justice Thomas’s childhood of extreme poverty, and how he rose from that to become a Supreme Court justice. It’s the American dream — but the real story is how Justice Thomas leaned on his faith to get him through the tough times, especially during his confirmation hearing and the investigation triggered by professor Anita Hill’s accusations of sexual harassment.

Ginni Thomas recalled how the stress of the confirmation hearing and the investigation took a toll on her husband. Sen. Joe Biden grilled Justice Thomas on his views of natural law, trying to get Thomas to talk about his views on abortion. When Anita Hill’s allegations surfaced, Justice Thomas knew he’d have to go back in front of the Senate. “We could feel it,” Ginni said. “So, they were coming to destroy my husband, not just discredit him or differ with his point of view. This was the kill-shot.”

She was worried. “He may have thought it was necessary to go back in front of the Senate, but honestly from his wife’s point of view watching the man who is my love, beloved husband, I didn’t know he had it within him to keep going.”

Friends regularly came to the Thomases’ house to study the Bible with the couple and hold them up in prayer. “And they helped us in our home, read through the Bible, and put on the armor of God because it felt like the demons were loose.”

‘God was With Him’

One key moment in the film surrounded Thomas’s description of the investigation as a “high-tech lynching.” No one could have known that Justice Thomas was completely spent at that point. He appeared to be collected and confident. “When Clarence gave the high-tech lynching speech, I knew how little of my husband was sitting in front of me,” said Ginni. “And I knew that God was with him, because I knew he wasn’t doing that on his own, because I knew how weak he was at that point.”

Justice Thomas told the committee he welcomed the opportunity to clear his name. He said he wasn’t the same since the allegations by Hill surfaced. He adamantly denied her claims. “I have not said or done the things that Anita Hill has alleged. God has gotten me through the days since September 25th and He is my judge.”

Created Equal is in theaters nationwide today. For more information or to schedule a showing, please visit JusticeThomasMovie.com.