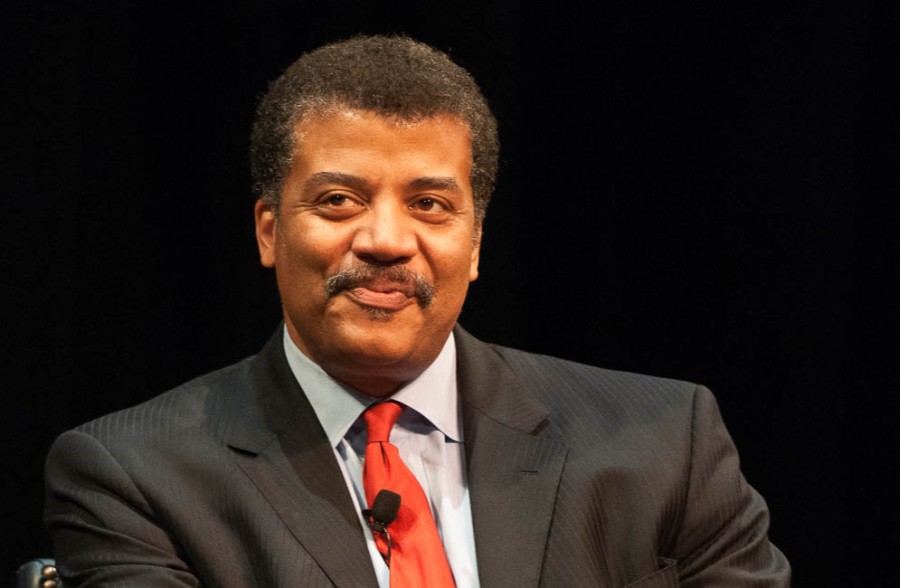 Does the Cosmos TV documentary teach myths? Yes. The third series, hosted by Neil deGrasse Tyson, concluded recently on the National Geographic Channel with this:

Stars make worlds, and a world made life. And there came a time when heat shot out from the molten heart of this world and it warmed the waters. And the matter that had rained down from the stars came alive. And that star stuff became aware. And that life was sculpted by the earth, and it struggles with the other living things. And a great tree grew up, one with many branches. And six times it was almost felled, but still it grows. And we are but one small branch, one that cannot live without its tree. And slowly we learned to read the book of nature, to learn her laws, to nurture the tree, to become a way for the cosmos to know itself, and to return to the stars.

Tyson ends his summary of cosmic history since the Big Bang with this story focused on earth. It sounds like the the book of Genesis — minus God. It is a worldview-shaping narrative that awakens the imagination. That means it is a “myth” in the way anthropologists use that word. It also contains myths in the common sense of “false parts.”

When connected with earlier Cosmos episodes that give details (typically without sufficient evidence), this narrative answers important questions. Or it seeks to answer them. Where did we come from? Answer: we are star stuff shaped by the branching tree of evolution, powered by unguided material processes. What is our purpose? Answer: to be one of the ways, along with extraterrestrial civilizations, that the universe knows itself through science. Where are we going? Answer: we will become connected with civilizations located around countless other stars.

This will liberate us from terrestrial religions and scientific infancy (Tyson earlier held a baby to make this point). Six times terrestrial life worked hard to avoid total extinction and succeeded, but in the seventh period we will enter our cosmic rest of extraterrestrial (ET) enlightenment.

While resting in the lap of ET we will read the Encyclopedia Galactica, Tyson suggests. This book represents the super-advanced accumulated knowledge of ET life. This is an idea that Carl Sagan helped transfer from science fiction to “documentary” film back in the 1980 Cosmos series. We’ll enjoy heavenly bliss while reading the good book. That’s a key message from the Cosmos franchise.

Seven Wonders of the New World

The makers of Cosmos wish to reach your heart with their message. It’s a materialistic imitation of biblical religion.

Such World’s Fair science-fiction storytelling works well as it builds upon a certain measure of legitimate science. There are five widely recognized mass extinction events in our planet’s history. Throw in human-caused global warming as the sixth catastrophe (allegedly in the making in our own time) and you have a great recipe for cosmic mythology. Let’s save our Mother Earth in act six and join the extraterrestrial choir of enlightened ETs in the triumphant seventh act. Hey everyone, make sure you oppose those fanatically religious earth-centered, flat-earth-believing science deniers who are destined for extinction. Science is our only salvation. (See my historical analyses of Christianity as being responsible for flat-earth-belief here and unthinking resistance to Copernicanism here. These are two historical myths).

The makers of Cosmos wish to reach your heart with their message. It’s a materialistic imitation of biblical religion. Mother Nature is god and Tyson is her prophet. “Learn her laws,” he declares, echoing Moses. Nurture the Tree of Life she has mindlessly created. Countless times in the series Tyson says “Come with me,” imitating Jesus’ call for disciples.

The grand story is dressed up to look scientific, but at heart it is mostly materialistic mythology. I see it teetering between atheism and pantheism, as I’ve argued in my book Unbelievable. In the “Preaching Anti-theism on TV: Cosmos” chapter of my book I discuss Cosmos 1980 and 2014. Cosmos 2020 dishes up more of the same. Many will swallow it.

Carl Sagan’s widow, Ann Druyan, is the key figure who made the two recent series of Cosmos possible. She had this to say about her team’s storytelling:

Every story that we tell has to satisfy different criteria. … We’re aiming for your brain, your eye, your heart, your senses, your ear … via effects. Everything has to be working together in concert to give you a consummate experience, and to attract you to want to know more.

Referring to traditional religions, she finally says in the same interview: “I think we have a much better story to tell than they do.” I doubt this even if both were treated as fictional narratives. Of course the truth or fiction of each story is the subject of the main debate.

There’s much more where that came from: It’s Unbelievable!