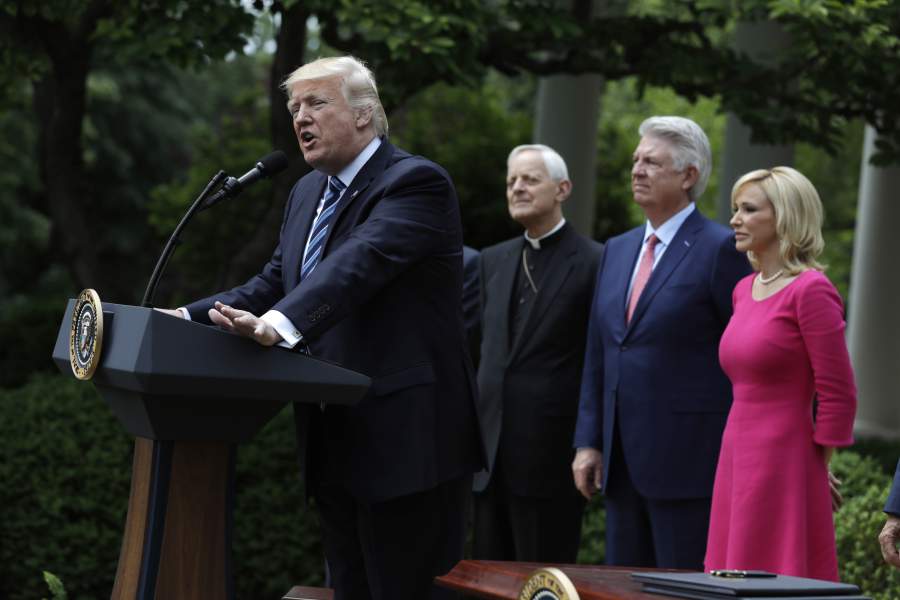 President Donald Trump speaks in the Rose Garden of the White House in Washington, Thursday, May 4, 2017, before signing an executive order aimed at easing an IRS rule limiting political activity for churches.

Trump’s religious freedom promises appealed to voters during the election season. He seemed to be keeping that promise early on in his first 100 days. In February a version of Thursday’s executive order leaked to the press. The draft contained strong protections for religious businesses and ministries.

But many conservatives are warning that the final version is worse than the initial draft. They claim it lacks some necessary components for protecting religious freedom. They took to Twitter to express their misgivings.

On Wednesday Trump hosted some prominent Christian figures for a dinner at the White House. Conservative commentator Eric Metaxas posed for a photo with Christian singer Stephen Curtis Chapman.

Pastor Franklin Graham also tweeted about the Wednesday dinner. “I thank God that we have a president who seeks the counsel of men and women of God,” Graham posted on Facebook. Graham said Trump’s executive order “helps protect churches and Christian organizations.”

Last night I was at the @WhiteHouse for dinner with other pastors and Christian leaders from across the country. https://t.co/v8FHVvyxdb pic.twitter.com/kcdKJgBtU9

Conservative critiques came quickly. They claimed the protections listed were too vague or not enough. Ryan Anderson of the Heritage Foundation feared it was “woefully inadequate.”

If the @realDonaldTrump EO on religious liberty ends up being what media outlets are currently reporting, then it'll be woefully inadequate.

Let's hope media outlets are wrong. Religious freedom is in the best interest of all Americans, of whatever faith or political bent. https://t.co/3qqoAzTJjf

According to the one-pager, freeing churches from the Johnson Amendment seemed to be a major focus of the order. The Johnson Amendment prevents pastors from endorsing candidates from the pulpit. Trump consistently promised to repeal the law during his campaign. But some on Twitter claimed it wasn’t a top concern for many pastors. New York Times columnist Ross Douthat tweeted the issue “has literally never come up” in his conversations with religious leaders.

In years of conversations w/religious leaders worried about their institutions' liberties, Johnson amendment has literally never come up.

That drew this response from Andrew Kloster from The Federalist:

90% of pastors believe they should not endorse candidates for public office from the pulpit. https://t.co/k9MY8vXyqP

Good work by my friends at @AllianceDefends. The EO doesn't do anything meaningful (it may even be dangerous, as I'll explain in a piece) https://t.co/XqavgMJJnr

Later Thursday morning Trump addressed a group in the White House Rose Garden. News outlets, including Fox News, tweeted excerpts from his speech. Trump said he was “giving our churches their voices back.” He also said “no one should be censoring sermons or targeting pastors.”

.@POTUS: "We are giving our churches their voices back." #nationaldayofprayer pic.twitter.com/uBKYvRLkJ6

.@POTUS: "No one should be censoring sermons or targeting pastors." #nationaldayofprayer pic.twitter.com/M4kqSpZDjw

After his remarks, the president signed the order.

Who Has the Text?

Meanwhile, Twitter users were looking for a copy of the order’s complete text.

So who's got the actual text of this thing?

Anybody have actual EO text?

Washington is a town in which even top secret documents get leaked, and yet we can't get the text of an EO that *has already been signed*?

Yahoo News reporter Jon Ward tweeted what appeared to be the final order.

I'm told this is the final language. Will wait to see WH release it for sure but can at least get a head start on reading. pic.twitter.com/Ktyi7voCCq

The full text of the order is now on the White House website and can be read here.

Moore tweeted he was thankful the order affirmed “the need to protect religious freedom.” But he added that “much, much more” is needed.

Grateful for Executive Order's affirmation of the need to protect religious freedom. Much, much more needed, especially from Congress.

ADF released another statement regarding the order after its signing. In it, ADF President Michael Farris says the order leaves certain religious liberty promises “unfulfilled,” but also “provides hope” that more action is to come.

Stream contributor and Colson Center President John Stonestreet tweeted, “If the #ExecutiveOrder is a first step, it’s a tiny, tiny one at best.”

If the #ExecutiveOrder is a first step, it's a tiny, tiny one at best. Not enough on #HHSMandate, nothing on conscience in public square.

A small step, perhaps. But for Tony Perkins of the Family Research Council, a significant step in defending religious liberty.

Hate Speech Is a Myth Used to Steal Basic Freedoms