Schlafly was the type of woman modern feminists would rather not think about. Their problem was that she gave them no choice. 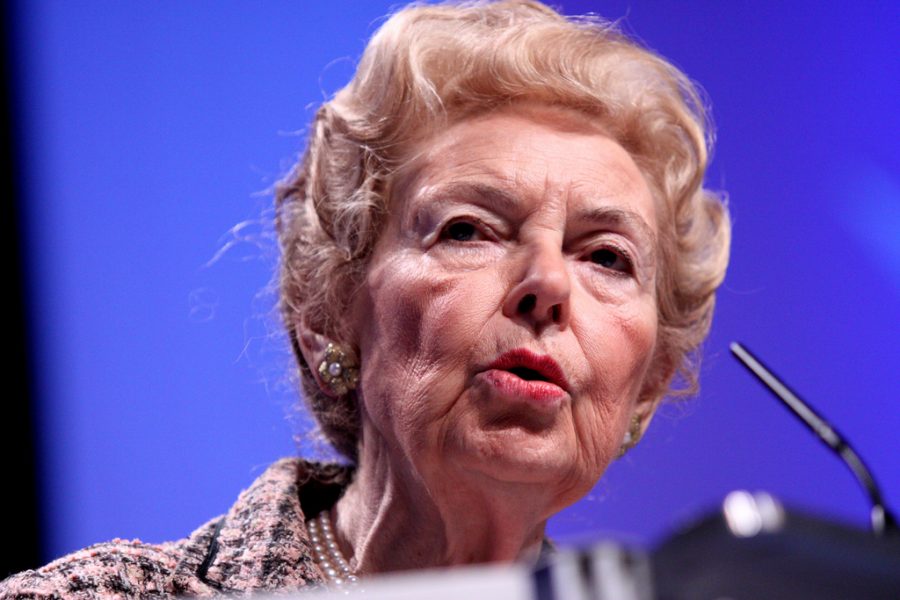 When my mother first saw Phyllis Schlafly, she was perched atop a hay bale on stage at a rally in Springfield, IL. The rally had been organized by Religious Right pillar Jerry Falwell, Sr., to oppose the Equal Rights Amendment. Fifteen states in all rejected the bill, and Illinois would become one of them.

When I first saw Phyllis Schlafly, she was giving a lecture organized by the Young Republicans at my local college. Some thirty years had passed, but Schlafly’s vigorous energy had not diminished. She spoke before a packed house, including many hostile students and feminists. I was 10 years old at the time and would go on to attend many lectures by a number of conservative pundits in my middle school years. Yet her performance has always stood out in my memory. She was the picture of poise. She defined unflappability. She took any question thrown her way and turned it back on the questioner with consummate ease.

One answer she gave was particularly memorable. A young man had asked Schlafly whether she would agree that she owed her own success in life to the advances of feminism. No doubt he thought this was a rather clever line of attack, hoping to make her saw off the branch she sat on. Without missing a beat, Schlafly replied from long practice, “No. I owe it to the free enterprise system.” In particular, she said, she owed it to the invention of disposable diapers.

That was classic Phyllis, understanding exactly which buttons to push. Of course, she knew that if feminists extolled any modern invention, it would be the birth control pill. After all, the entire point of the Equal Rights Amendment was to put career women on the same plane as career men. But babies are inconvenient reminders of the fundamental inequality between men and women. The unspoken implication was that no confident, intelligent woman could be truly fulfilled being so confined. Yet here was Phyllis Schlafly, who was nothing if not confident and intelligent, having flourished as an activist and an intellectual while simultaneously raising six children.

Even at the age of 10, I knew that her answer encapsulated conservatism in a nutshell. It summed up everything I was learning and would continue to learn about the history of ideas and the promotion of human flourishing. Leftism purports to lift the burdens of the common man, but the free exchange of goods and services actually does. Feminists may claim that they are working in the best interests of women, but they pretend not to hear what women actually want. In fact, there is a direct correlation between the erasing of distinctions between men and women and the increase of female suffering.

Nowhere is this more true than in the context of the military, another hot topic on which Schlafly was remarkably canny and foresighted. At that same lecture, she patiently dismantled another questioner’s anecdotal argument that since he was weaker than a female friend, concerns about women in the military were unfounded. As simple biology and statistics show, such anomalies are quickly cashed out in the bell curve of the general population. One of the main reasons Schlafly fought the ERA was that she knew it would leave a constitutionally clear path to drafting women. Then even feminists might have cause to lament that they were not more careful what they wished for.

Already, the slow erosion of gender distinctions in combat roles over the decades has amply borne Schlafly out. More and more female soldiers are coming forward to admit the inconvenient truth that women cannot meet male standards and are hurting themselves by the attempt. This doesn’t even begin to touch the tangled mess of issues surrounding the loss of privacy between sexes, including rampant promiscuity, seduction and outright assault.

All these issues and more were exposed in Brian Mitchell’s seminal 1997 work Women in the Military: Flirting With Disaster. Happily, my mother thought to bring our copy for Phyllis to sign. She took the book and wrote in the front, “Brian Mitchell is a great hero. Phyllis Schlafly.” I doubt any price would compel us to part with it.

I cannot say that I agree with all the political choices Schlafly made in recent years. Truthfully, some of them saddened me. But this much I can say with confidence: Nobody was better at cutting through the fog and exposing the disaster that was third wave feminism. Nobody better understood how it would shape this country, as indeed it has shaped this country. Nobody opposed it more articulately, and surely, nobody had more fun doing it. She was the type of woman that feminists would rather not think about. Their problem was that she gave them no choice.

Women’s History Month: The Women You Won’t Hear About in the MSM