Whether hoping to head to the statehouse or city council, these candidates face November elections driven by conservative ideas and Christian convictions. 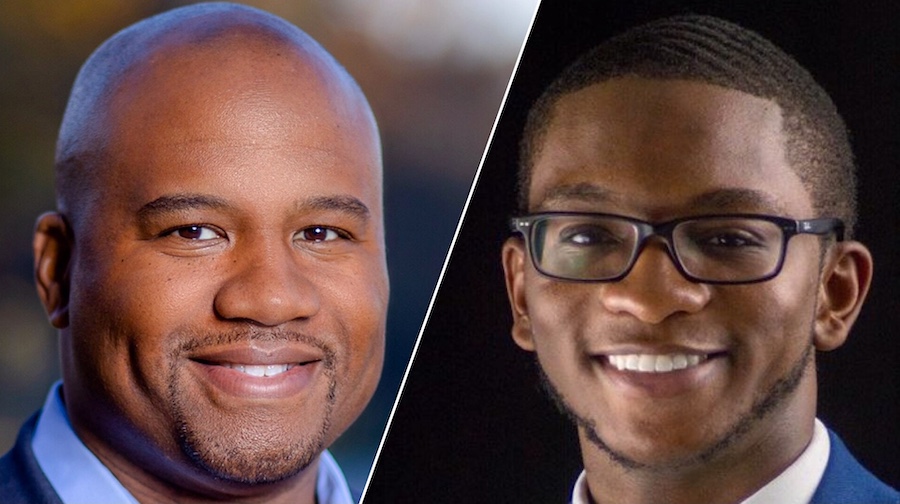 D.J. Jordan (left) of Woodbridge, Va. is running for the Virginia House of Delegates 31st District seat, while Ed Ford, Jr. is a candidate for the common council of Middletown, Conn. State and local elections across the U.S. are slated for November 5, 2019.

When candidate D.J. Jordan goes door-to-door in his northern Virginia district, he gets the same reaction over and again from potential voters.

An energetic, 41-year-old African American father of four, Jordan reveals within a minute of conversation that he’s running as a Republican.

“The faces that I get are often quite humorous,” says Jordan in a phone interview. “People don’t openly say: ‘I didn’t expect that because I was stereotyping you.’ But they do say it with their face.”

As the nation gears up for 2020 elections, many quickly look past this November. Yet in a few months, eight states will hold state legislature and gubernatorial elections. Countless U.S. cities also have local leaders running, their races often forgotten during a so-called “off-year.”

“The government that matters the most is the government closest to you,” says Ed Ford Jr., a candidate for city council in Middletown, Connecticut. “If you feel the taxes you’re paying are too high, or you have a problem with your kids’ school curriculum, the President and Congress aren’t holding the bag. Go talk to your mayor, school board, and city councilors.”

Both candidates could be seen as anomalies. According to Pew Research, 84 percent of black Americans claim a Democratic affiliation or lean Democratic. Yet Jordan and Ford are forging ahead with campaigns unmistakably grounded in conservative ideals.

“I don’t have a lot of trust and faith in government to solve all of my problems,” says Jordan, former communications director for Senator James Lankford (R-Okla.) “Our bureaucratic federal government can barely do the simple things well.

“That’s one of the reasons why I am a conservative.” “My father was a small business owner,” recalls Jordan. “He created tremendous opportunity for me and my five brothers and sisters. We were all able to go to college and are doing very well in our lives.”

The candidate says local economic development and tax policies played a role in his father’s freedom to succeed. Now he has made those issues a core part of his campaign

“I would like to empower people and local civic groups to be the solution to problems facing our communities,” says Jordan. “Responsive Virginia leaders can produce better education policy, public safety, and economic policy than the federal government.”

In central Connecticut, Ed Ford Jr., age 21, has now served 18 months on his local Board of Education. Ford’s platform also has key planks derived from his personal experience.

“My father went to the military after high school, not a four-year university,” says Ford. “That option turned out great for him, completely changing his life for the better. College is turning out great for me — but it may not always be helpful for everyone.”

Men of Faith in Politics

“Our group advances values that have always been at the foundation of African American communities,” says Nelson.

“Those include strengthening the black family, criminal justice reform, and economic opportunity. Both D.J. and Ed communicate these principles in effective, refreshing ways.”

Neither candidate shies away from discussing their Christian faith and its relevance. Pew Research reports that black families are markedly more religious than other groups in America.

“If you look at Scripture, God sanctioned three different authorities: the family, the church, and government,” says Jordan. “The Bible speaks often of kings and rulers, about what their role should be and how to serve. People of faith should value government and pray for our leaders.”

The son of a minister, Ford has long led the local youth group at his father’s church.

“Politics is dark, shrewd, and cruel,” says Ford. “But that doesn’t mean I have to be. The Word says, ‘We are the light of the world.’ The Lord can work through political roles to change things from the inside out.”

Similar to proposals others have advanced, Ford argues that high school students should be given a range of options. He sees apprenticeships, trade schools, and other training as viable paths to success beyond a four-year degree.

“It’s tough when you see youth who feel like they don’t have options,” he says. “Sometimes the adults in their lives just want to check off boxes. Students are told, ‘Well, we got you into college, so go spend all this money.’

“We have to take a step back and present all the options,” urges Ford. “Let them choose, live, learn, and experience it.”

Ford speaks often about the achievement gap students of color face when compared to the majority. More than talk, he has taken action to change outcomes.

“Young men are increasingly forgotten,” says Ford. “It’s one reason why I helped start a men’s group at a local high school. It’s called Men of Excellence, which the boys came up with. It helps specifically young men of color learn and talk about life after high school.”

On the Board of Education, Ford has been a key voice bridging generational and racial divides in Middletown. Last year, he helped students at one school after an incident involving a Confederate flag.

This year, a local school named for Woodrow Wilson has come under fire due to the former president’s legacy of racism and segregationist policies. Ford has not hesitated to take a stand.

“People here in the community have differing opinions,” says Ford. “My view is the name should be changed. Woodrow Wilson’s legacy in terms of demeanor and policies toward minorities is well known. When we know better, we should do better. You cannot brush off racism so easily.”

For Jordan, his emphasis on criminal justice reform is linked to incidents he has seen of discrimination.

“In communities of color, justice has not always being handed out fairly,” he says. “When something happens to somebody you don’t even know, but looks like family, you sometimes feel it’s an attack on yourself.”

Jordan laments that incidents of police brutality have occurred in recent years. Yet he refuses to oversimplify the issue using popular narratives.

“Some police units have some bad apples, and justice should be served,” he says. “Those cases don’t all represent the law enforcement system in America. It’s important everybody be treated fairly and with dignity.”

“It should be the other way around,” says D.J. Jordan. “Whether it’s the school board or city council or state house or mayor, policies that come from those offices will impact you in your everyday life far more than Washington.” With his national focus at The Frederick Douglass Foundation, Dean Nelson notes that endorsements will be forthcoming. He cites Virginia candidate Garrison Coward alongside Jordan and Ford as ones to watch.

“While there are not that many races this cycle, we are training and preparing many more to run in 2020,” says Nelson. “Rather than check our Christian values at the door, each believer should evaluate public service as one of the areas to get involved in.”

As to Ed Ford, he continues to juggle Board of Education meetings with his own studies at Central Connecticut State University. He will graduate in December with degrees in psychology and political science.

“It’s sad how politics often works,” says Ford. “Politicians say they won’t raise taxes, then in office they add 30 or 40 new taxes. What are we really doing here? Are we forgetting what the people voted for and requested?

“You shouldn’t have an agenda other than serving people — that’s the main thing for me.”

Explore The Stream’s complete politics coverage, and sign up to receive top stories every week.