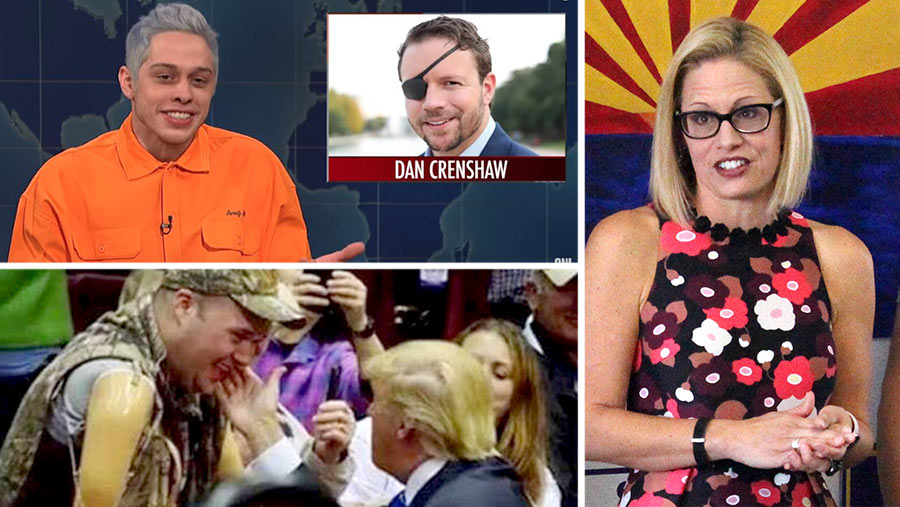 Good news for Alec Baldwin. He no longer holds the title of most obnoxious act by an SNL star this week. No, sir. The loser and new champ is Pete Davidson. During this weekend’s episode, the Saturday Night Live cast member and the writers decided to mock a wounded war veteran, and the show’s producers signed off. And NBC doesn’t seem all that bothered.

In the segment, Davidson was giving his  “first impression” of assorted people running for congress. Naturally, his initial targets were Republicans. He got to Dan Crenshaw, who is running for congress in Texas. First, a bit on Crenshaw. According to his campaign website,

On Dan’s third deployment in 2012, his life changed forever. After six months of combat operations, Dan was hit by an IED blast during a mission in Helmand province, Afghanistan. He was evacuated and awoke from his medically induced coma learning that his right eye had been destroyed in the blast and his left eye was still present, but badly damaged.

He laughs at his own joke. “I’m sorry,” he says, still laughing. “I know he lost his eye in war, or whatever. Whatever.”

Candidate Crenshaw is handling the mocking with class. He isn’t looking for an apology. In a tweet, he said, “Good rule in life: I try hard not to offend; I try harder not to be offended. That being said, I hope @NBCSNL recognizes that vets don’t deserve to see their wounds used as punchlines for bad jokes.”

Good rule in life: I try hard not to offend; I try harder not to be offended. That being said, I hope @nbcsnl recognizes that vets don’t deserve to see their wounds used as punchlines for bad jokes.

Ironically, as Mike Huckabee noted, SNL‘s insult may have handed Crenshaw a victory in today’s election.

.@GovMikeHuckabee on SNL mocking @DanCrenshawTX: "Pete Davidson might have done him a favor, may have sealed his election to be a member of Congress." #TheStory https://t.co/pvTlGPdULS pic.twitter.com/EvLOy3BPgt

As I’ve mentioned before, I spent years writing topical humor. Sometimes you mess up. Whether because your heart has grown cold, you fall blindly in love with a joke or simply the law of averages, sometimes you’re going to write something that earns you a trip to the woodshed. Also, Davidson just got dumped by pop superstar Ariana Grande. I have vague memories of writing some snotty comedy bits in the wake of a painful breakup.

However, what gets my goat about Davidson’s joke is not the “joke,” per se.  It’s the dismissive “or whatever. Whatever.”

Here’s where Davidson gets in real trouble:  “I’m sorry … .” A faux apology, which to me signals a set-up of another punch line.

“I know he lost his eye in war. Or whatever. Whatever.” Watch the video. (His Crenshaw remarks are at around the :57 mark).  This is complete, utter and deliberate disrespect. Contemptible. Being injured in combat to protect your freedom is not an “or whatever.” Ever. He sacrificed his eye for you. For me. For the ideas that allow you a fame and fortune unimaginable in the Afghan hellhole where his vision was blown to bits.

You honor that. You honor his service. It is the right and only thing to do. Anything else and you deserve to have beautiful pop singers boot you to the curb.

And here’s the thing, rookie. You do that, you do right by his sacrifice and sincerely honor him before a national audience, you can now turn around, do another punch line and get double the reward. For example: “You may be surprised to hear he’s a congressional candidate in Texas and not a hitman in a porno movie.” Then, sincerely, “Actually, Crenshaw lost the eye while fighting in Afghanistan. So thank you, thank you for your sacrifice. (beat) And if you happen to lose Tuesday, need a gig and do wanna play a hitman, we’ve got Stormy Daniels’ number. Gotta support the vets.”

It’s not what I would have done, and it’s not very funny, even for SNL. But it’s what Davidson could have done without mocking a vet not just for his wound but for how he got the wound. He’d have had your silly joke, honored Crenshaw, honored vets, got a callback to his first joke, and even have a callback to Stormy Daniels’ own SNL appearance.

But the worst part isn’t what Davidson said. Who particularly cares what some shadow of SNL greatness past says? The worst part is that his “or whatever” attitude symbolizes a bigger problem.

“Or Whatever” is a Symptom

Think of Arizona’s Democrat nominee for Senate Kyrsten Sinema. After 9/11, Sinema paraded around encouraging people to join the Taliban … the same Taliban that harbored the 9/11 terrorists and was actively trying to kill American soldiers. (Including her opponent Martha McSally.) During this race, she’s been posing as a moderate, which is as believable as me posing as a Sports Illustrated swimsuit model. OK, less believable. On Sunday, she dropped the pose. Krysten Sinema refused to express regret over her Taliban comment.

Pete Davidson is a comedian. This woman is hours away from perhaps being elected U.S. Senator.

Think of former Secretary of State John Kerry. Remember how he was caught in 2006 suggesting those joining the military were stupid or lazy? Same disparaging mentality as SNL, without the musical guest.

In fact, think of those ticked off at President Trump for daring to say he wants soldiers to protect themselves against the caravan thugs who were throwing rocks at Mexican soldiers. What is at the core of that protest? Before you answer, consider these are the same minded people who were spitting on our soldiers coming back from Vietnam.

America Has a Choice

Meanwhile, President Trump was also dealing with a wounded war vet this weekend.

America has a choice at the ballot box tomorrow and as a nation going forward: Supporting those who touch our soldiers and those who torch them. And that’s no joke.

Al Perrotta is the Managing Editor of The Stream, and co-author of  The Politically Incorrect Guide to Immigration. He is also a former VP of content at All Comedy Radio, and nationally-syndicated topical humor writer.