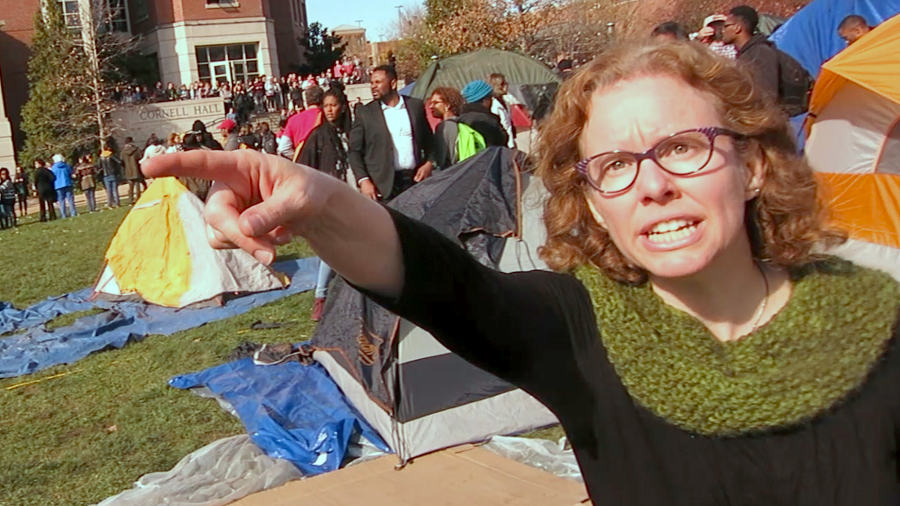 Former University of Missouri Journalism professor Melissa Click, as she threatened violence against a student journalist filming a leftist protest.

In the wake of the riots that have silenced free speech on one campus after another, it is clear that few colleges or universities still offer a real liberal arts education. Nor have most even lapsed into simple careerism, aiming solely at getting students ready to support themselves and their families. That would be bad enough, a grim decline from the reason that the Church created the first universities back in the Middle Ages: forming the “whole person,” as West Point still aims to do.

No, things are much worse than that. The reason that most students go to college is grimly careerist — it’s like getting a green card that permits you to work at most jobs in America. But the schools have kept the infrastructure of old-fashioned Western liberal arts institutions, adding on the apparatus of 19th-century quasi-sciences like sociology and history. However, the ideas about human nature, politics, economics, morality and culture that have captured most humanities and social science departments are aggressively hostile to the culture of the West, especially Christianity, limited government, and economic freedom. Even the unique value of human life is no longer taken for granted, thanks to the explosion of ecological fundamentalism in the name of “sustainability.”

Your average humanities department is like a seminary whose theology department has been captured by tenured atheists.

So we have the worst of both worlds: schools that keep up the pretense of forming young people in humanistic disciplines, while the teachers who’ve grabbed control of the relevant departments are doing exactly the opposite. So students pass statues of Homer, Dante, Milton, Shakespeare and Washington, en route to classes whose teachers and texts sneer at every value any of those men would have treasured.

Your average humanities department is thus like a seminary whose theology department has been captured by tenured atheists. Even in schools that still retain a Western core curriculum, there are influential teachers like the late Edward Said of Columbia, who boasted that he taught the “canon” of Western literature as a means of exposing our culture as the oppressor of most of the world.

Even worse than that, whole disciplines have turned against ideals of reason, free discourse and objectivity, and rest their conclusions instead on untestable, aggressively political dogmas whose premises are unquestioned. In fact, if a student or teacher attempts to question them, he will simply be punished, academically or professionally. Thus they operate less as intellectual fields of inquiry than intolerant, man-made religions — or ideologies. That word means more than just “worldview.” It’s a term for a set of intellectual rationalizations for positions you chose for non-rational reasons, such as the craving for money, power, privilege, or revenge. An ideology is a half-baked idea with a fully loaded pistol.

An ideology is a half-baked idea with a fully loaded pistol.

The great critic of Nazi and Communist totalitarianism, Eric Voegelin, explained how to distinguish a legitimate, grounded worldview from an ersatz religion, or ideology. In The New Science of Politics, he noted that ideologues defend their systems not by anticipating objections and answering them, but instead by forbidding the questions.

Marx allowed no room in his system of materialistic determinism for the possibility  of God. When students asked him about that, he told them that in a future socialist paradise, the question of God would never come up. (Indeed, future Marxist governments would send the secret police to make sure of that.) Of course that is not an answer but an evasion. It’s the response not of a philosopher but of an ideologue.

Women’s studies professors, almost to a person, take for granted the right to abortion. How many “queer theory” teachers are willing to entertain the natural law objections to same-sex marriage? Will they let students defend that position in papers in their classes, without subjecting them to classroom shaming and punitive grading? Would students who end up in one of these classes have the nerve to make the experiment? I don’t advise it. I advise not taking those classes, and if they are required I advise transferring colleges.

Can we really take seriously the claim that these are legitimate academic fields, when the answers to complex questions that are widely and justly debated — not just across America, but around the world and throughout the centuries — are so blithely taken for granted that there are simply no dissenters? Worse still, these disciplines poison other departments, as history professors adopt the “consensus” of women’s studies “scholars” on one issue, and philosophers, theologians, even chaplains accept the queer theorists’ party line.

It’s not just that classes infused by such corrupted, politicized disciplines indoctrinate students with pat, false conclusions, and encourage them to wield them self-righteously as cudgels. Nor even that students are being robbed of the chance to appreciate thinkers, artists, and statesmen of the past with any sympathy or pleasure. All that is bad enough.

Even worse, in the long run, are the intellectual laziness and emotional fragility that such an education produces. Can you imagine college Democrats in 1952 reacting to the election of immigration hawk Dwight Eisenhower as today’s “snowflakes” responded to Donald Trump’s win? Even the self-righteous and often violent radicals who took over campuses in the 60s didn’t have melt-downs, public crying fits, and apparent nervous breakdowns when Nixon beat McGovern. Whatever crackpot ideologies they might have adopted, they had been through the training in rigorous, critical thinking that Western education has prided itself on since the ancient Greeks. Our current generation wouldn’t know rigor from rigor mortis.

All these are excellent, and to my mind decisive, reasons to shutter most humanities and social science departments, and reduce English faculty to teaching remedial reading, correct grammar, and the basics of business writing. Let universities and colleges shrink down to their icy, pragmatic core: preparing future taxpayers, without poisoning their minds with toxic ideologies founded on crass intellectual sloth. First do no harm.

But who will pass on the really important traditions of humanistic learning, which our current crop of “humanists” has poisoned like a virus yet clings to like a tapeworm? Tomorrow I’ll grope toward an answer at how to replace the wrecked infrastructure of liberal education in our current tough conditions.