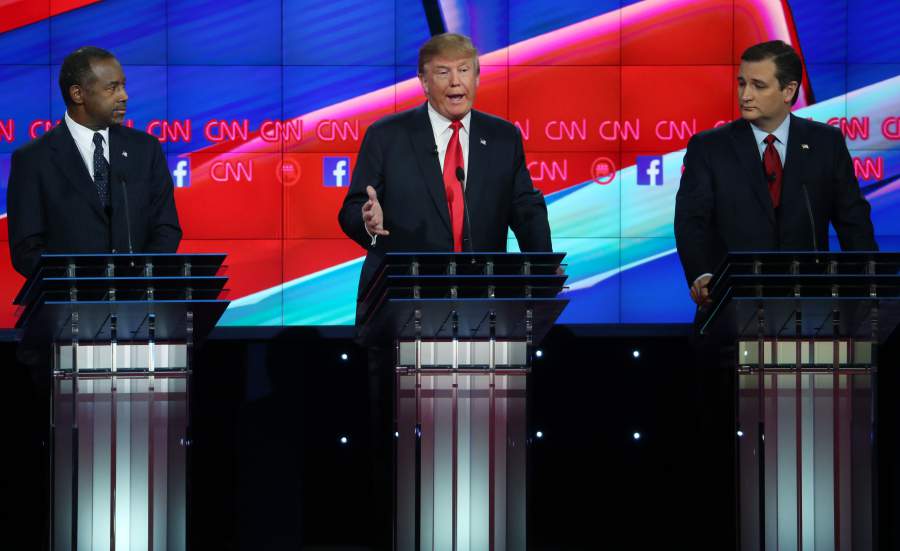 Tonight, we saw the last GOP debate of 2015. As always, the politicos and pundits tweeted their way through.

As the candidates came out, viewers were listening to see who got the most applause.

Based on the applause-o-meter @marcorubio seems like the winner. (It's at LEAST as scientific as most of the polls out there) #GOPDebate

Ben Carson called for a (very brief) moment of silence for the victims of San Bernardino, to mixed reviews.

Good on @RealBenCarson for taking a moment of silence for San Bernardino. And fantastic medical analogy in the intro!

Please join me for a moment of—ok we’re done!

With candidates going after Rubio, it appeared he was seen as the one to beat.

They're not attacking Trump. They're attacking Rubio. He's the real threat. #GOPDebate

Candidates treating Rubio as frontrunner. Trump is a bystander.

When @realDonaldTrump tells @CNN @SenTedCruz was very "respectful," it's like saying he was a really great waiter.

Kasich closing statement: “Nice little swing state you’ve got there. It would be a shame if something happened to it."

Shorter Cruz: "You'll need to use all three legs of the nuclear triad to get me to answer this question about attacking Trump."

If Trump proposed switching ISIS's internet account to Comcast it would make more sense and be more effective than his actual plan.

Debate grades: Rubio A Cruz A Jeb A- Christie B+ Trump B Paul B Carly B- Carson C- Kasich D

Thought Cruz, Christie & Rubio were the winners. Which would make a great debate, too. Just those three.

Here’s my scorecard tonight (scale of 1 to 5, 5 being best). pic.twitter.com/VYC5ISFCji

Rest up, politicos. We’re not done yet!

At least one person has a suggestion for improving the next debate.

These debates would be better if, when a candidate gave a really pathetic answer, a trapdoor opened & he disappeared. E.g., Kasich now.