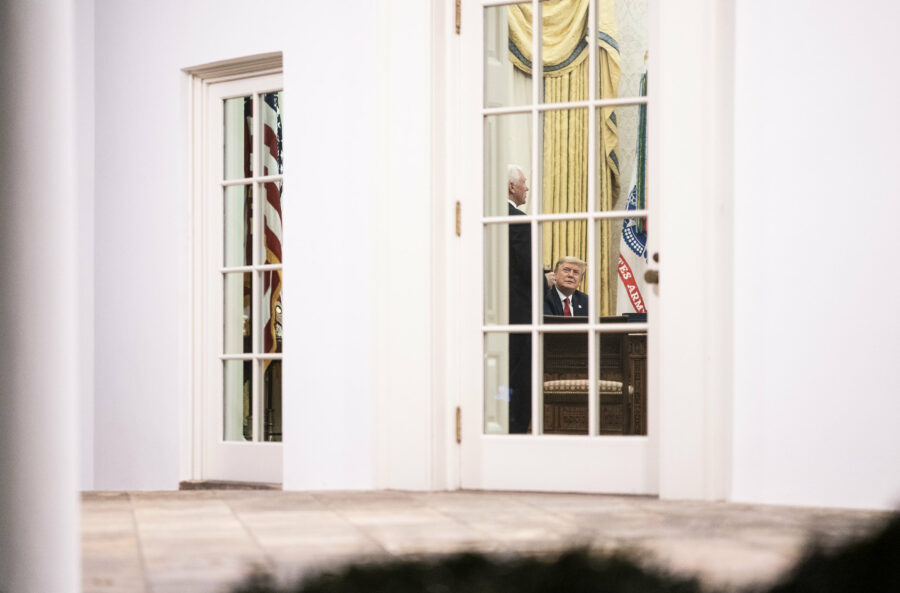 Trump was right. Right all along.

Hillary Clinton’s lawyers hired a tech firm to “infiltrate” servers not only at Trump Tower, but at the White House, as part of their effort to falsely tie President Trump to Russia. That’s the explosive revelation found in a new filing by Special Counsel John Durham.

A Smear Job from the Start

Clinton lawyer Michael Sussman went to the FBI with allegations that Trump was tied to the Putin-controlled Alfa Bank. (Sussman has been charged with lying to the FBI when he said he wasn’t working for any client … let alone Trump’s opponent.)

Hillary would weaponize these allegations in the last days of the 2016 campaign.

It's time for Trump to answer serious questions about his ties to Russia. https://t.co/D8oSmyVAR4 pic.twitter.com/07dRyEmPjX

To boost the Trump-Russia myth, the Clinton Campaign ordered both Sussman, and his election-rigging partner Mark Elias, to hire a tech firm. Its job? To fake Trump connections to Alfa Bank.

What’s new in Durham’s latest filing is that these efforts extended to grabbing computer data from the White House itself after Trump took office.

In connection with these efforts, Tech Executive-1 – (Identified as Rodney Joffe) exploited his access to non-public and/or proprietary Internet data. (Joffe) also enlisted the assistance of researchers at a U.S.-based university (Identified as Georgia Tech) who were receiving and analyzing large amounts of Internet data in connection with a pending federal government cybersecurity research contract.

Durham says that the government will prove at Sussman’s trial how Joffe was able to spy on the activities of Trump’s computers at Trump Tower and his Central Park West apartment. And (most chillingly) at the “Executive Office of the President of the United States.” That’s the White House.

How’d they do it? By exploiting a sensitive arrangement those researchers had with the federal government. A pending cybersecurity research contract, in fact.

DNC/Perkins Coie allies – Rodney Joffe, et al. – exploited a sensitive US govt arrangement" to gather intel on the "Executive Office of the President of the U.S."

They spied on Trump. pic.twitter.com/LOTseK2KhV

But hold that thought.

In a statement, a vindicated President Trump says the filing provides

indisputable evidence my campaign and my presidency were spied on by operatives paid by the Hillary Clinton Campaign in an effort to develop a completely fabricated connection to Russia. This is a scandal far greater in scope and magnitude than Watergate and those who were involved in and knew about this spying operation should be subject to criminal prosecution.

In a stronger period of time in our country, this crime would have been punishable by death.

Trump said early on in his presidency that the Obama administration had spied on him. And revelations about the FBI’s Crossfire Hurricane and its use of illicit FISA warrants proved him right.

Yet, even during the 2020 campaign, legacy media were still pretending that this never happened.

Watch this Leslie Stahl 60 Minutes interview in light of the new revelations.

Trump Administration official Kash Patel spent years working for Rep. Devin Nunes to unravel the Trump-Russia hoax. He told Fox the filing “definitively shows that the Hillary Clinton campaign directly funded and ordered its lawyers at Perkins Coie to orchestrate a criminal enterprise to fabricate a connection between President Trump and Russia.”

Per Durham, this arrangement was put in motion in July of 2016, meaning the Hillary Clinton campaign and her lawyers masterminded the most intricate and coordinated conspiracy against Trump when he was both a candidate and later President of the United States, while simultaneously perpetuating the bogus Steele Dossier hoax.

According to Fox News, Trump Director of National Intelligence John Ratcliffe provided nearly 1,000 pages of documents to Durham. Ratcliffe told the Special Counsel there was “enough evidence” in those documents to indict “multiple people.” This includes a CIA investigative referral on Hillary Clinton purportedly approving “a plan concerning U.S. presidential candidate Donald Trump and Russian hackers hampering U.S. elections as a means of distracting the public from her use of a private email server.”

That 2016 referral went straight to then-FBI Director James Comey and then-Deputy Assistant Director of Counterintelligence Peter Strzok. Did they act? Not against Hillary. They kept after Trump.

They Knew It Was Junk

But consider: In 2016 — before Trump was elected — the FBI knew the whole Trump-Russia thing was garbage. That means that on January 5, 2017, when Barack Obama, Joe Biden, James Comey, James Clapper, John Brennan, Loretta Lynch and Susan Rice met in the White House to discuss the Trump Russia investigation, every single person in that room knew better. Each one of them knew that the “Russia collusion” was a Clinton-concocted hoax.

And yet they all agreed that the Trump investigation would continue, and he would only be told by James Comey about the Steele Dossier’s “salacious details.” (This enabled the Obama Administration to leak to CNN the Comey-Trump meeting, so it could run with the Steele Dossier story.)

How’s That Relate to the New Finding?

What does this have to do with the news the Clinton campaign paid a tech firm to infiltrate the computers in the Trump White House? Remember those researchers? They and Joffe were able to access the White House servers by taking advantage of the fact they had a “pending federal government cybersecurity research contract” involving the Executive Office of the President.

Why Risk Such Crimes?

My first question was, “Why on earth would those researchers risk a huge government contract … let alone jail … just because some tech guy and lawyers for Hillary Clinton wanted them to?”

Being partisan is one thing. Being stupid is another. Perhaps during the campaign, Hillary’s people could promise you not only the contract, but protection when she won. But even that is incredibly risky. And Hillary didn’t win. Anyway, the effort continued after Trump was president. No, someone on the federal side of the ledger had to be involved. Somebody had to give the okay.

The Senate must ask the @ODNIgov Avril Haines, former Deputy of @AmbRice46, who from NSA or any agency knew of this monitoring.

Now why would Grenell suggest Susan Rice’s Deputy knew all about this arrangement? That other agencies knew? I believe it is fair to ask if Rice — and thus the others in the Oval Office on January 5, 2017 — knew about the researchers who had accessed Trump Tower and Trump’s apartment. If so, why didn’t they shut the operation down?

Perhaps in the waning days of the Obama presidency, when they had reason to believe that spying on Trump via FISA requests might soon be at an end, they determined to take advantage of that other avenue. (We already know that Comey planted agents in the Trump White House. Why not take advantage of an ongoing cyberattack on Trump?)

The Players Behind This Scandal Are Back in Power

There’s another reason we have to pay particular attention to this story, as Glenn Greenwald was pointing out Sunday. Some of the prime players are now in control of our country. Our national security.

Avril Haines is now the Director of National Intelligence.

And who was a leading pusher of the Alfa Bank story to begin with? (Aside from Hillary.)

The Foxes Now Have the Henhouse

Meaning, the same guy who insisted Trump was in cahoots with Putin is the same guy currently insisting Putin is going to invade Ukraine. The same guy hyperventilating about how urgent a matter this is for the United States (while ignoring our own border.)

In other words, if anyone says “Durham’s filing is irrelevant, let it go, it’s in the past” or “what difference, at this point, does it make?” tell them “It makes a world of difference right now. A potential world war of difference.”

May Durham nab all of these criminals and seditionists before any more damage can be done to America.

And yes, I said seditionists. Committing cyberwarfare against the President of the United States certainly beats walking around the Capitol taking selfies.