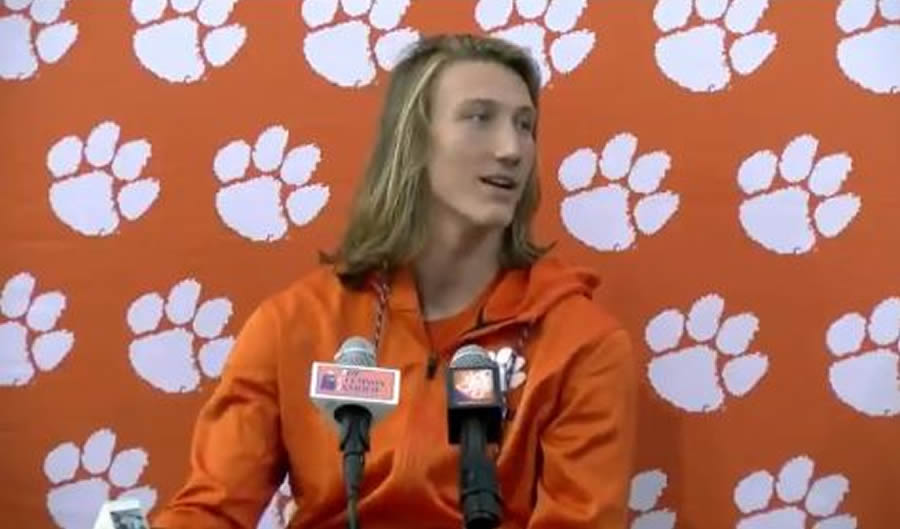 However, football isn’t the most important thing to the freshman phenom. “Football is important to me obviously,” said Trevor in a post-game interview. “But it’s not … the biggest thing in my life, I would say. My faith is.”

No matter the situation, Trevor says it won’t define who he is. “It’s putting my identity in what Christ says — who He thinks I am and who I know that He says I am.” At the end of the day, it doesn’t matter what people think of him, he explains.

His Humility and His Arm

Even so, he’s garnered the respect of his coach, Dabo Swinney. “He’s just so poised. He just sees it. And he’s got a gift of an arm,” Swinney told The State. “But I just love his humility and how consistent he is with his preparation, day in and day out. Easy, easy guy to coach. Easy guy to get behind and support. His teammates love him.”

Trevor is humble and refuses to take all the credit for the win. “It makes it a lot easier on me when you have guys all around you that are just great players and take that load off of you. There’s not much pressure when you have guys this good playing around you. So just that. And the coaches have helped me a ton, just helped me prepare and get me ready for all these situations.”

After Saturday’s win at the Cotton Bowl, Clemson advances to the national title game in Santa Clara, Calif., against Alabama at 8 p.m. Monday, January 7.

"Just putting my identity in what Christ says and who He thinks I am and who I know that He says I am."
– Clemson QB Trevor Lawrence
pic.twitter.com/bVbP8CC2an

Trevor Lawrence is good at this football thing 🙌