Churchill’s Youthful Manliness: A Review of Hero of the Empire by Candice Millard 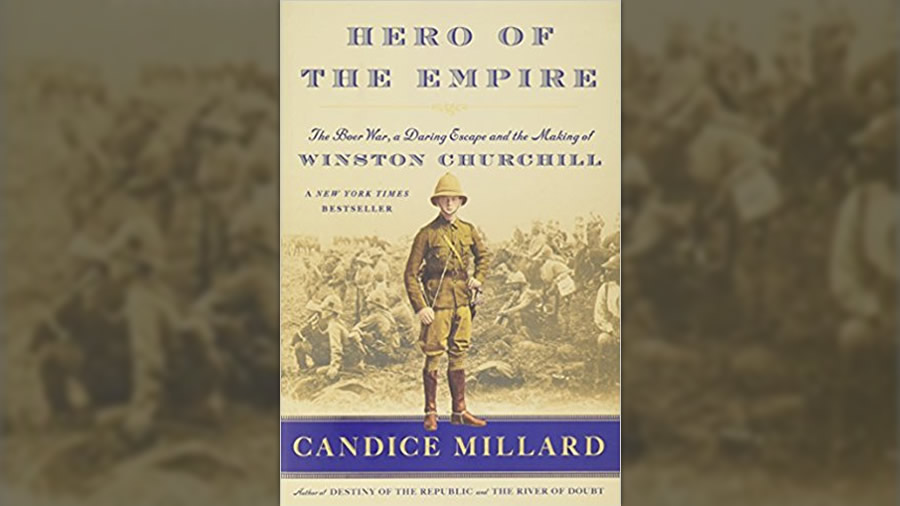 Boers captured the young Winston Churchill just days before his twenty-fifth birthday. The hardy Afrikaners were waging successful warfare against Britain’s imperial armies, and the capture of this ambitious aristocrat was a small but significant psychological victory. Churchill had already come under fire during the Cuban War for Independence. He had engaged the Pashtun on the Indian frontier. He had even joined the last great British cavalry charge in Sudan. But Churchill’s escapade during the Second Boer War was to be his greatest adventure yet.

Candice Millard enthusiastically recounts Churchill’s South African exploits in her latest biography, Hero of the Empire: The Boer War, a Daring Escape and the Making of Winston Churchill (Doubleday, 2016). She reports Churchill’s heroic defense of an armored train, despite his status as a non-combatant newsman. Unarmed and outnumbered, Churchill was forced to surrender. For weeks, he endured listless boredom as a prisoner-of-war. Then opportunity knocked. In the dead of night, Churchill scaled an untended stretch of fence and set off on foot. Safety was over three hundred miles away.

Millard’s prose is thrilling. One feels, with Churchill, the danger of evading capture as a stow-away on a midnight cargo-train across the African grasslands. One recoils as Millard tells of the rat-infested mineshaft where Churchill hid while Boers searched nearby. Finally, after crossing leagues of enemy territory, he safely returned into the arms of an adoring British public.

The story has been told before, of course, perhaps with most gusto by Churchill himself in his autobiography My Early Life. But Millard paints the romantic drama of Churchill’s ordeal with vivid language that brings the fin de siècle conflict into crisp focus. Millard carefully charts the African biomes and provides helpful historical context. The Great War is ominously foreshadowed. Her character sketches of those who either capture Churchill or convey him to safety are particularly good. These slight narrative detours add rich texture without derailing her fast-paced account.

What stands out most from Millard’s retelling is Churchill’s outrageous ego. He relentlessly sought advancement and acclamation, thrusting himself into whatever far-flung imperial conflict he could to earn distinction. “I do not believe the Gods would create so potent a being as myself for so prosaic an ending,” Churchill told his mother. The young man’s ambition, self-advertisement, and supreme self-confidence sometimes annoyed his superiors. Thankfully, his wit and natural intelligence more than compensated. “I don’t like the fellow,” said Sir George White, “but he’ll be prime minister of England one day.”

Today’s trend toward extended adolescence has revealed a crisis of self-discipline. Idleness is killing manliness.

Churchill’s daring is the stuff of boyhood novels. But is it just nostalgia? I don’t think so. For today’s young men, who are constantly berated about “toxic masculinity,” Churchill can be an inspiring example. The self-reliance that Millard highlights in Churchill’s personality is an antidote to today’s project of cultural feminization. The story of a twenty-four year old who wooed fortune and won distinction can also be a lesson for millennials stuck in the rut of prolonged adolescence.

Harvey Mansfield defines manliness as “confidence in a time of risk.” Churchill had it in heaps. Not only was he courageous when skirmishing the enemy, but he also demonstrated competence to command as he rallied soldiers against the attacking Boers. Under a barrage of fire, Millard writes, “He rose to the challenge as though he had been waiting for just such a disaster, which in many ways he had.”

As Mansfield notes, manliness is “biased in favor of action.” A sedentary life consuming entertainment does nothing to cultivate honor. Sloth does not lead to courage, decision or independence. “Idleness is a dangerous breeding-ground,” Churchill wrote. Yet, by the age of twenty-one, the average young man has spent 10,000 hours in the virtual world of video games. That’s just slightly fewer than all the hours spent in middle and high school. And let’s not even begin to count the hours spent watching TV or scrolling through social media.

Other factors also suggest malaise. Young men are more likely to live with their parents than with a spouse. And the labor force participation rate for men aged 25–34 is the lowest it has been since 1980. For some, these life circumstances sow dissatisfaction. But for too many young men, it is satisfying. Why strive for more?

This trend toward extended adolescence has revealed a crisis of self-discipline. Idleness is killing manliness. But that’s not all. These vices also pose a political problem because we live in a republic, the survival of which depends on self-government.

Millard’s biography casts a vision for manly ambition that extends beyond World of Warcraft. Winston “lives on excitement,” wrote John Atkins, a fellow war correspondent. “The more he scents frustration, the more he has to fight for; the greater the obstacles, the greater the triumph.” Men of action like Churchill crave distinction. Though military service cultivates and channels manliness, the thirst for honor need not be martial. Churchill was also an avid painter, writer and inventor. He had read Plato, Darwin, Schopenhauer and Gibbon. He had written two books before ever setting foot in South Africa. Indeed, ambition is the force that drives men into political life. It leads them to seek office, stake out positions, and defend them against opponents. The same virtues that made Churchill a hero of the Boer War made him the political leader the West so desperately needed in 1940.

Too much manly ambition, of course, is a vice. No doubt Churchill’s braggadocio often careened toward excess. But today’s cultural milieu tends more toward the deficiency of manly virtue. Young men should seek out valiant deeds, risk, overcome obstacles and become part of something greater than themselves. And they should be stirred to develop the competence and character to justify their self-confidence. By providing an archetype, Millard contributes a timely encouragement toward those ends.

Josh Craddock is a student at Harvard Law School. He lives in Cambridge with his wife and two children.

Even Astronauts Fear the Left