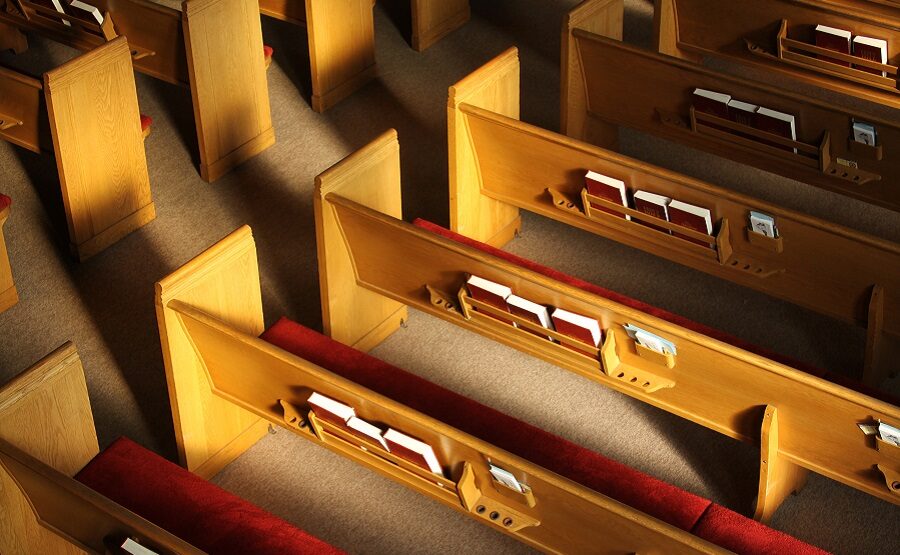 Church is essential. That’s what many of us have said in the face of ongoing COVID restrictions. But to a growing number of Americans, church is not essential — even among those who believe.

Gallup surveys the religious attitudes and practices of Americans twice each year. They roll this data into three-year chunks for comparison over time. From 1998-2000, 69% of American adults were members of a church, synagogue, temple, or mosque. By 2008-2010, that figure had dropped to 62%. And by 2018-2020, just 49%. So over one decade, a drop of 7%. Then over the next decade, a drop of 13%. This also marks the first time, in 80 years of polling, that Gallup found church membership to be less than half the population.

A caveat: It’s not clear that Gallup asked people about church participation vs. membership. Some folks attend church but haven’t joined a church. This dovetails with a larger trend of people today opting for less social or civic commitment to organizations, not just houses of worship.

The Rise of the Nones

The drop in church membership is primarily a function of the growing number of Americans who have no religious preference. The percentage of Americans who did not affiliate with any religion has grown from 8% in 1998-2000 to 21% from 2018-2020. Only 4% of non-religious Americans belong to a house of worship. That may seem obvious: If you’re not religious, why be in a church? Well, from 1998-2000, about 10% of non-religious Americans belonged to a church, synagogue, or mosque.

So, there are two things happening here. One, far more Americans today lack a religious affiliation. Two, within this (much larger) non-religious group, a smaller portion belong to a house of worship. The good news, then, is that church membership is more pure — increasingly restricted to those who truly believe what a local church teaches.

The Rise of the “Privately” Religious

But it’s not just the non-religious that are ditching church. Those with a religious affiliation are also less likely to belong to a church! 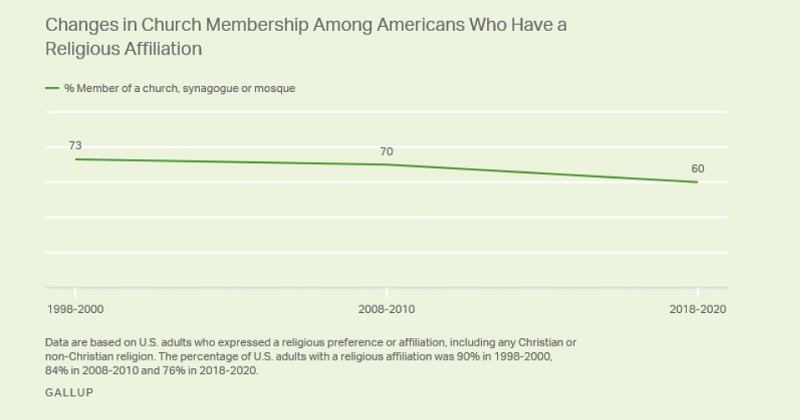 Notice again the greater rate of decline in the last decade than the previous decade. At this rate, only half of religious Americans will belong to a church in 2028-2030.

You probably suspected this: Church membership is highly correlated with age. But the drop-off with age is steeper than I had expected. Two-thirds (66%) of Americans born before 1946 belong to a church. These folks turn 75 or better this year. Among baby boomers, it drops to 58%. Gen X? Down to 50%. And millennials? Just 36%. The steepest drop is from Gen X to millennials. Gen Z adults, those born between 1997-2002, look to be about the same as millennials so far. But data on Gen Z adults is limited.

Traditionally, church participation among young single adults has been lower than the adult population in general. It’s not terribly uncommon for folks to grow up in the church, struggle with participation in their college or early professional years, and then return to more regular involvement (and membership) when they get married, settle down in one place, and start having children.

The difference today is two-fold: One, marriage and family are coming later than in past generations. Two, a growing number of non-religious Americans means there is less social pressure to join a house of worship. Among millennials, 31% lack religious affiliation. Among Gen Z adults, it’s 33%.

What Can We Do About It?

Entire books have been written, but I’ll close with two observations.

Teens need to know that Christianity is both objectively true and deeply satisfying. The Christian faith is uniquely tied to historical events, particularly the life, death, and resurrection of Jesus Christ. There are compelling reasons to believe Jesus rose from the dead. For example, it’s hard to explain the empty tomb and an immediately vibrant group of believers apart from the bodily resurrection of Jesus. They were willing to die for what they or those they knew had seen first-hand.

Other religions tell us how we can perhaps work our way to heaven or achieve Nirvana. Christianity teaches that we cannot save ourselves, but God in Christ came down to be our mediator and sin-bearing substitute. It uniquely reconciles the justice of God with the mercy of God (Romans 3:26). The Trinity is mind-boggling, but consistent with God being love and not needing his creation. We were made to join the eternal fellowship within the Godhead (see John 17).

There are similarly compelling reasons to believe that the Bible is unique in all of human literature. Divinely inspired, and without error, it can therefore be trusted for all matters of faith and practice.

The New Testament does not have a category for Christians without a church. It’s assumed that Christians will belong to a local church (Matthew 16:18, Matthew 18:17, the book of Acts) and will thus be in community with a particular group of believers and accountable to specific leaders (Hebrews 13:17). It’s at minimum arrogant to be a Christian and not be part of a church.

Be mindful of the downsides of excessive age segregation. Youth and college ministry can be a vital part of a young person’s life, providing a context for faith-affirming, character-shaping, positive peer relationships. But teens also need to be tied to the life of the church as a whole, so that they prioritize church involvement after they graduate and make their way into the world. Parents and other church leaders can be intentional in helping teens make this connection.