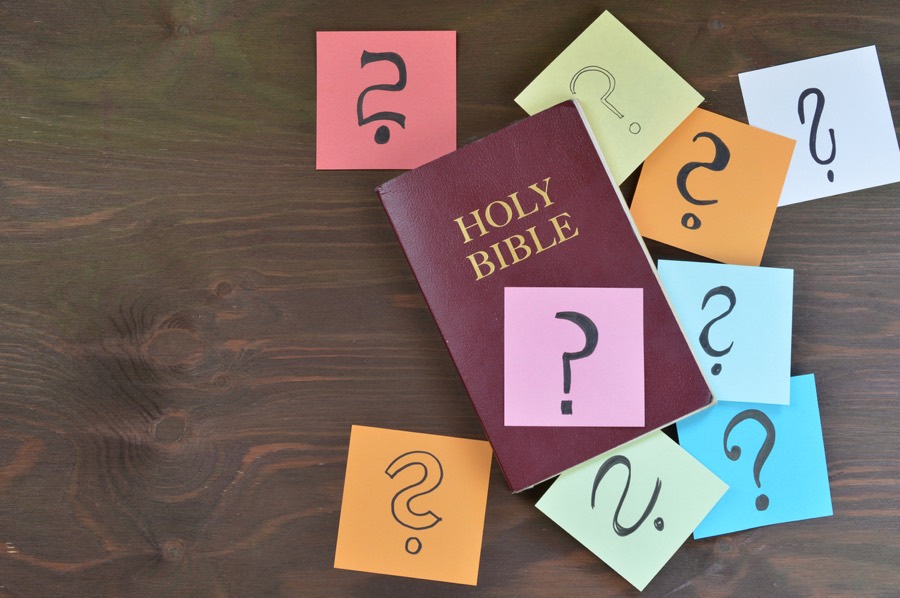 It’s a horror tale I’ve heard way too often: “They told me at church, ‘We don’t ask questions around here. We believe it because the Bible says so.’” It’s a dark story, because it almost always ends with, “And that’s why I don’t believe now.”

Research from the Sticky Faith authors shows that young people who are encouraged to question the faith are much more likely to stick with it as adults. It makes sense: If they’re led to believe Christianity can’t handle questions, they’re bound to conclude it doesn’t have real answers.

I get that the people who say, “We don’t ask questions here,” are trying to be faithful to God’s word. They don’t like anyone challenging it, strictly because it’s God’s word. I can see the draw that way of thinking might have.

The New Testament Sets an Example of Respecting Questions

Except if we’re going to be faithful to God’s word, we need to know that “God says it, I believe it, that settles it” isn’t biblical. There’s an entire book of the New Testament that sets a completely opposite example.

The book of Hebrews was written — by whom, no one knows — to a fellowship of Jewish Christians who were facing anti-Christian hostility. Clues within the book make it clear that fellow Jews were trying to get them to give up on Christ and return to Judaism.

This writer had hard words for Christians who were “dull of hearing” — intellectually lazy, perhaps? — and who should have been teachers, but were like milk-drinking infants instead.

So the letter is all about Jesus’ greatness, with warnings and exhortations not to let go of Him. Now let’s imagine the conversation if this writer didn’t believe in asking questions. This imaginary conversation begins,

Long ago, at many times and in many ways, God spoke to our fathers by the prophets, but in these last days he has spoken to us by his Son, whom he appointed the heir of all things, through whom also he created the world. He is the radiance of the glory of God and the exact imprint of his nature, and he upholds the universe by the word of his power.

Which is the first two-and-a-half verses of Hebrews.

Imagine If the Bible Taught, “We Don’t Ask Questions Here”

Now let’s imagine one of the Hebrew recipients of this letter reading just that paragraph, and saying, “Wow, that’s great. But I still have a question. Is Jesus better than Moses?”

And let’s imagine the writer answering. “Why do you ask? We don’t ask questions here. Besides, I already answered. Read what I wrote!”

“And I’ve already explained it. Your job is to believe it.”

“But we’ve been doing all these sacrifices in the Temple. Why should we believe Jesus replaces all that?”

“You can read, right? What did I say? ‘He’s the exact representation’ of the nature of God. What more do you need? I’ve said it, now you believe it!”

“But I’m confused about this ‘faith’ thing. I don’t see that word being used much in our scriptures. Is this something new?”

“There you go again, asking questions. Didn’t I tell you we don’t do that around here? Besides, I’ve already told you, Jesus ‘upholds the universe by the word of His power.’ That’s all you need to know. Quit disrespecting God’s word by asking all these questions!”

That’s all imaginary. It’s how it might have gone, though, if the Bible actually discouraged question-asking.

The writer opens with a paragraph that might have said everything that needed saying. Jesus’ greatness shines magnificently in the letter’s first three to four verses. Isn’t that enough? No, because it leaves other questions unanswered. So he didn’t merely say Jesus was greater, he explained it. He respected the questions they were undoubtedly asking, and he gave patient (or at least mostly patient; see Hebrews 5:11-14) and reasoned answers.

This sets an example we must take seriously. The writer of Hebrews takes his readers’ questions seriously enough to sit down and write good answers. We can afford to take the time to stand up and give good answers.

How To Find the Questions and the Answers

But there’s a rub there. You can’t give good answers unless you know the questions, and some good answers to go with them. Hebrews has a message for us on that, too, in the less-than-patient part I mentioned earlier (5:11-14). This writer has hard words for Christians who were “dull of hearing” — intellectually lazy, perhaps? — and who should have been teachers, but were like milk-drinking infants instead. Let me paraphrase what he said there: Don’t be that way!

Today’s questions are obviously going to be different from the ones the Hebrews asked. Hardly anyone is asking today, “Is Jesus greater than the high priests?” So how do you discover what people are asking now? By encouraging them — and especially youth — to go ahead and ask. And then by listening to them when they do.

And how do you learn the answers? There are scores of books you could turn to, but that’s too long a list. Instead, for questions about how we know Christianity is true, I suggest you search at one or more of these websites: Ravi Zacharias, Stand to Reason, or Reasonable Faith. If it’s about Christianity in relation to ethics, law, or culture, we’ve probably covered it right here on The Stream.