Christian Nationalism: Do Both the Left and the Right Have It Wrong? 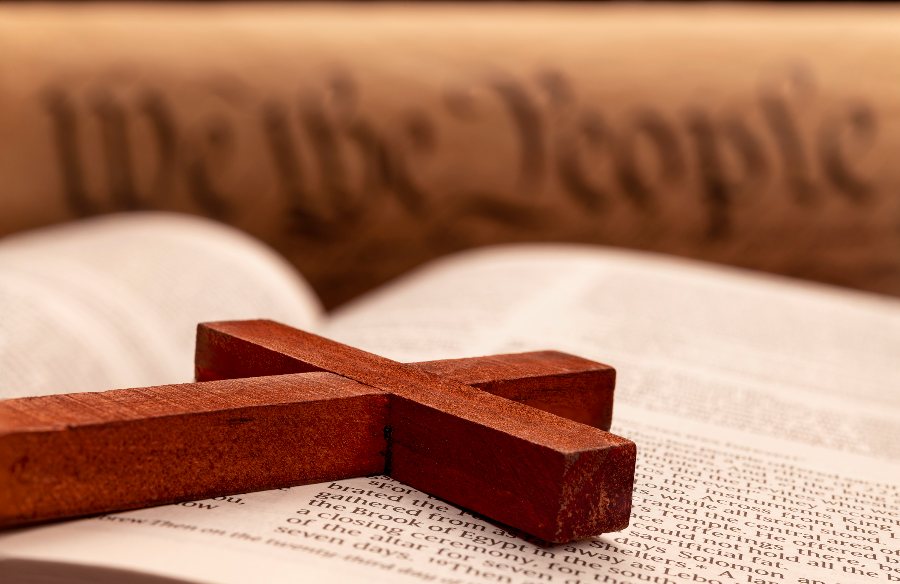 Whether it’s being called a fundamentalist because you agree with the fundamentals of the faith, a bigot because you challenge false narratives, or a homophobe because you denounce sexual sin, the goal of name-calling is always the same: to silence those with opposing views.

This is exactly what’s happening with the words “Christian Nationalism.” They label Conservatives in hopes that their message will be discredited.

The real debate is over obeying God and His principles: Many want the freedom to do what they want, when they want, how they want, and to whom they want without any moral restraint — “The wicked freely parade and prance about while evil is praised throughout the land.” (Ps. 12:8)

Here is a quote from a website with an ax to grind about it: “Christian nationalism poses a grave threat to democracy, the church, and the common good — and grassroots Christians are sick of seeing false prophets distort the Gospel for their agenda of hatred, power, and division.”

The “false prophets” this website is referring to are respected Christian leaders such as Franklin Graham and Tony Perkins. Sadly, many caught in the middle are led astray by these lies.

An Agenda of Hatred, Power, and Division

We love others enough to tell them the truth. That’s not hatred; it’s genuine love. (Eph. 4:15) We aren’t seeking political power; we simply understand the enormous influence leadership has on our country and we seek to make a difference. The Left is spreading lies; shouldn’t we spread the truth?

We are not causing division; the truth causes division: “No doubt there have to be differences among you to show which of you have God’s approval.” (1 Cor. 11:19)

In Matt. 10:34, Jesus said that He didn’t come to bring peace but a sword (spiritually speaking). He knew that His message of truth would divide because those in darkness hate the light, and this is exactly what we are currently experiencing — kingdoms are colliding.

You Will Know Them by Their Fruit

We aren’t distorting the gospel as they claim; we are actually living it out in all areas of society, from pro-life to anti-perversion legislation.

The irony is that the Left calls solid believers false prophets, when in reality, they are the ones who are false according to Matt. 7:16: “You will know them by their fruits.”

Just look at the fruit that ungodly legislation is producing. Folks, this isn’t rocket science. As just one of countless examples, when transgender men are allowed to twerk and pole dance in front of kids, the fruit of dark sexual perversion is alarming. Not to mention people being ostracized and punished for suggesting that there are only two sexes. How dare they!

They Dismantle to Rebuild

The Left-leaning website adds that the Right makes a false assertion that “America is a Christian nation and … is founded on so-called Judeo-Christian values.”

America is called a Christian nation because its foundation was built on biblical principles and Christian character. This is why the U.S. Supreme Court made the following statement in 1892: “From the discovery of this continent to the present hour, there is a single voice making this affirmation … that this is a Christian nation.”

In an article titled, How the Bible Made America, Newsweek magazine made this revealing statement on December 27, 1982: “Historians are discovering that the Bible, perhaps even more than the Constitution, is our Founding document.”

The Left must dismantle God’s foundation in order to build their agenda, which explains  their constant attempts at revisionism. But even if America was established by atheists, God’s Word would still be the gauge by which we should govern. For example, when leaders legislate murdering innocent life in the womb, we cannot remain silent. We care about all stages of life — from the womb to the tomb.

The lesson the Right can learn from these attacks is to season their words with grace and demonstrate humility in the midst of verbal assaults. The truth will offend, but our attitude shouldn’t.

Where is repentance? Where is the desperation to seek God? We are angry, but are we humble? As I often say, our gun safes are full but our prayer closets are empty. This must change.

Where the “Right” is Wrong

Politics isn’t the answer and politicians aren’t our saviors. We can’t serve two masters. We bow to the Cross, not the flag. Don’t get me wrong, I love America, and the right leadership is crucial, but religious arrogance is only furthering the divide.

Regardless of political affiliation, God supports the humble but resists the proud. (James 4:6) The answer to our national crisis is very simple, but it won’t be easy: Both the Left and the Right must get right with God.

Special Note: Fast forward to the 42-minute mark and listen to the sermon, Wounded but Valuable. More articles, including podcasts, sermons, and books can be found at ShaneIdleman.com.