In celebration of Holy Week, producers of The Chosen — a groundbreaking multi-season series dramatizing the Gospel narrative — have dropped hours of episodes online.

Backed by over $11 million dollars raised through crowdfunding, a dramatic adaptation of the ministry and miracles of Jesus Christ launched this week for viewers to stream on-demand.

The writer and director behind The Chosen says they aim to change the rules for how to cinematically approach the biblical text.

“I’ve seen pretty much every Jesus movie or miniseries ever made,” says Dallas Jenkins, a filmmaker for the past two decades. “But I’ve had the hardest time connecting with most of them, even the ones I’ve enjoyed as a believer, because they make the journey safe and clean.

“There’s no way to portray redemption — from depravity and oppression, to joy and freedom — unless it’s desperate and authentic.”

On Tuesday, in advance of Easter weekend, a full trailer for The Chosen released along with the series premiere (currently free). Three further episodes are available for purchase. Producers announced the complete first season will release in November on the VidAngel streaming video platform.

In December, The Chosen shocked Hollywood analysts when it became the top crowdfunded media project of all time. More than 16,000 people nationwide helped finance the initial episodes.

Speaking from California where editing was being finalized, Jenkins revealed his unique vision for the series, the power of developing characters over dozens of episodes, and how The Chosen speaks to the culture today. This phone interview has been lightly edited for clarity.

Origins of The Chosen

What prepared you to take on this multi-season adaptation of the Gospel narrative? 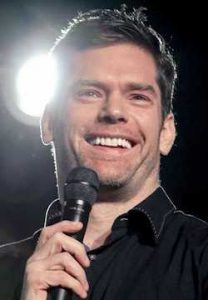 Dallas Jenkins: My background has been primarily in faith-based entertainment. My last feature film was The Resurrection of Gavin Stone, a comedy that failed at the box office — which led me to doing this project.

A lot of people would watch that film and this series and think: I don’t believe that’s made from the same filmmaker. But I’ve always liked to put a different twist on genres.

Consider a traditional Hallmark-style faith-based film. I’ve done those, but I’ve tried to do them differently — add a bit more sarcasm, cynicism or a raw feel to them, and still give the audience the goods. I believe succeeding and failing at that multiple times prepared me for this.

The Chosen seems like a traditional Bible project, but it’s from a different perspective. There’s more humor in this show than you normally see. The dialogue, pacing, camera work and music have a raw approach that are very different.

During the first century, there was a lot of corruption in both the political and religious orders. The Jewish people were severely oppressed by the Romans, and poverty was the rule of the day. But Jesus didn’t overthrow the Romans. We know how the story ends: He’s actually crucified in a very brutal way.

“There’s more humor in this show than you normally see. The dialogue, pacing, camera work and music have a raw approach that are very different.”

Audiences are still going to see Jesus do miracles and provide redemption. They will see moments of joy — and also a lot of humanity. I can’t say I’ve been a great filmmaker in 20 years, but I have learned a lot. I’ve never been more ready to do a show like this.

Marriage of Storytelling and Biblical Text

How would you contrast The Chosen with other dramatizations of the ministry of Christ?

Jenkins: A lot of Jesus projects are done like a docudrama. They take you from Bible verse to Bible verse, miracle to miracle, story to story — and they’re not intended to get deep into the people with whom Jesus surrounded himself.

Our show really digs in to its characters, making it as human and real as possible. Simon Peter was married, so let’s explore what married life was like back then. We know Simon’s personality from the text. How does it translate when he is at home with his wife?

We’re making a show that’s 2,000 years old, yet these characters feel like the kind of people you could meet and know today.

We’re taking the time to get deep into these stories. That’s the beauty of doing a multi-season show, as opposed to a 90-minute movie or a small miniseries. Then when the redemption or victory comes, you’ve had time to feel the desperation and need for it.

Who in your cast stands out to you for their performance?

Jenkins: You won’t recognize the majority of them. The most credentialed and experienced actor in our cast is Erick Avari, known for co-starring in Independence Day and Planet of the Apes. He has been acting for over 50 years, though in recent years he had essentially retired from Hollywood.

He was my first choice for Nicodemus and I sent him the script, not knowing he wasn’t working anymore. Erick loved the script and character so much that he got involved. His performance is extraordinary, making Nicodemus so relatable and real.

Many in the cast, who are relative newcomers, told me how much they learned working with Erick. From people who have seen early test screenings of The Chosen, one of the main comments we get is how much they love the acting.

Other projects have been filmed in Morocco or the Mideast to replicate biblical Judea. How do you think the sets and locations in north Texas measure up?

Jenkins: We’re not trying to make a traditional swords-and-sandals epic, with battle scenes and a huge, sweeping scope. This show is smaller by nature, to keep it intimate and focus on the characters. The audience won’t miss what they’re not seeing.

Filming about an hour outside of Dallas, we made use of a few structures in what’s called Capernaum Village. This woman had built it for tours though it’s out in the middle of nowhere. Our exterior scenes are a combination of some rural Texas topography combined with visual effects.

For interiors, we went to a large sound stage. Our team used photographs of town ruins in Israel for reference and historical depictions of first-century home life as inspiration for sets. Even without the budget of some of these big projects, there is a lot you can do.

Walking with the Son of Man

Why do you believe this series is important at this time in our culture?

Jenkins: More than ever, people are striving for authenticity. Today, because of social media and how politics typically works, there is so much that is inauthentic and not real.

Sometimes what we see is very unpleasant, and sometimes really joyous. We’re making a show that’s 2,000 years old, yet these characters feel like the kind of people you could meet and know today.

Visit the official website to watch the first four episodes of The Chosen. Check out when The Stream interviewed Dallas Jenkins on-set during production. Sign up to get our top stories every week.