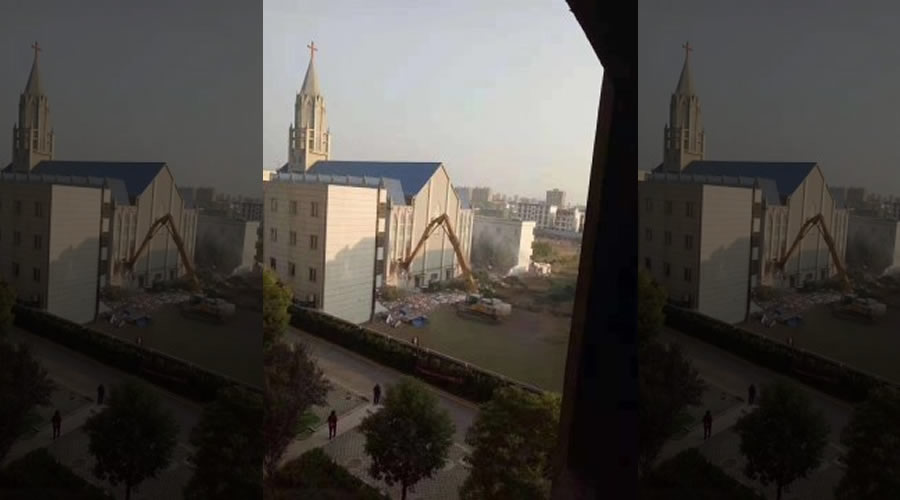 The church was destroyed even though it was government-sanctioned. No legal documents were provided to the church prior to the demolition.

Fuyang Christian Church, which could seat 3,000, was just the latest victim of Emperor Xi’s “religious fascism,” ChinaAid founder Bob Fu tweeted Saturday, referring to Chinese President Xi Jinping. ChinaAid is a national non-profit human rights organization “committed to promoting religious freedom and the rule of law in China.” A few hundred believers were in the church when the demolition began, Fu said in a statement to The Stream.

“This is yet another clear example showing the escalation of religious persecution today by the Chinese Communist regime,” said Fu in a statement. “The total disregard of religious freedom’s protection as enshrined in the Communist Party’s own Constitution tells the whole world President Xi is determined to continue his war against the peaceful Christian faithful. This campaign will surely fail in the end.”

“The management of religious affairs in China lies with the Communist Party now, not just with the government,” explained the aid group Open Doors, in a recent report on Chinese persecution of religion. “And Christians are intensely and increasingly feeling this shift and fear of Christian persecution.” Their worship is monitored both by cameras and spies. Christian youth “are increasingly being removed from church life,” while “teachers and medical workers are told they are not allowed to have any religious affiliation.”

Open Doors reports that “All churches are perceived as a threat if they become too large, too political or invite foreign guests. A policy of ‘sinicizing’ the church is becoming increasingly influential. The Communist Party is relying strongly on Chinese cultural identity to stay in power.”

The two pastors are still in prison, Fu said. “Unless the two leaders start to collaborate with the [Chinese Communist Party’s] propaganda fully, they’ll be likely indicted and even get a criminal sentence for their defiance of the church demolition.”

Fu asked for prayers for Christians in China. “Pray that even in the midst and despite of persecution believers of Christ will continue to stand strong and faithfully in proclaiming the Gospel of Christ.”