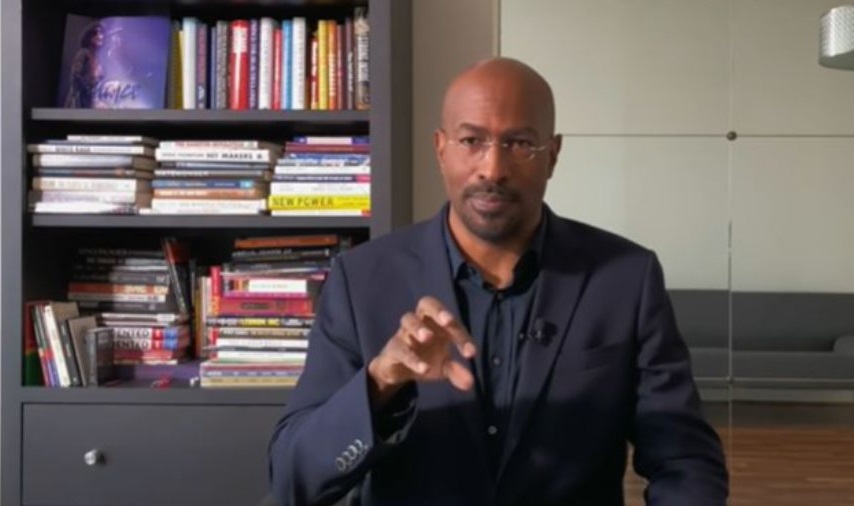 If it was simple stupidity, he ought to be embarrassed at his extreme lack of knowledge about how our federal government and electoral college system works. He declared that the Constitution contains a “work around” for the current president to subvert the will of the voters and virtually take the victory by government fiat. Of course, his position is that the Constitution is in the wrong, and therefore we must abandon it. (Leftists always push to rid ourselves of one of the most successful and democratic documents in history. They just hate that freedom-preserving declaration!)

Jones also seems to believe that anyone who disagrees with the purported results of the election, pre-declared by media sources and not yet certified even by the governing states, must be wrong, and denying their very voices in the marketplace of ideas. How completely undemocratic!

Sadly, he is not alone. Pro-Trump tweets that allege voter fraud are being flagged and taken down as controversial. Calls to rally for counting only legal votes are being censored from Facebook, and now even EventBright is pulling down pro-Trump content. Because there is such an obvious push in media, tech, and political circles to cover up any opposing views on the validity of the national vote results, one can’t help but speculate that Jones, far from the ignorant fool he plays in the video, is also engaging in manipulating his audience. The fix is in, and because they can’t win on fair grounds, they are actively cheating.

The Fix is In

Of course, they set it up, by asking Trump if he would concede, way back in the debates, and then speculating on his refusal to leave office. They are sowing the seeds of rebellion, fomenting civil strife.

On November 10, several days after the election, CBSNews published a piece criticizing YouTube for not removing content “falsely claiming Donald Trump won the election.” The piece later claims that Biden is “projected to win” while a report from November 8 claims, “Biden wins White House after taking Pennsylvania.” They can’t even get their own stories straight.

There is actually a meme about someone who can’t believe the election results because the media keeps insisting they are perfectly fine.

The Stopgaps Should be Sacred

In a free nation, counting only legal votes and ensuring election integrity should not be controversial. More importantly, understanding of the Constitution and the stopgaps it delineates for protecting the presidential vote should be well-known and, well, sacred.

Disingenuously posturing that these stopgaps are nefarious “work-arounds” and somehow constitute some kind of sleight-of-hand is blatantly manipulative. Jones is priming his uninformed audience. The leftist political elites and media are effectively convincing the American public that the votes have already proven Biden the winner, and that everything the president does is only subterfuge and subversion of the proper election results. They are stoking rage, in the case Trump brings the heat.

We know what the other side is capable of, and so do their “handlers.” Popular memes illustrate that, although over 71 million voters “lost,” there have been no riots — contrasting the violence of the Left versus the law-abiding Right. The weekend marches in DC to “Stop the Steal” evidenced that.

In his feigned-rage rant, Jones insists that in every other U.S. election in history the loser immediately conceded to the winner for the peaceful transfer of power. The loser, according to Van Jones, never contests the count! For this reason, he muses, President Trump is unprecedentedly attempting to usurp the powers of the executive and do a “work-around” to remain in power.

A quick glance at history proves him entirely wrong. For four years Trump defended against an entire Left dedicated delegitimizing him — first with the Russia hoax, then the Ukraine call, the prosecution of General Mike Flynn and others, impeachment, and now criticizing his response to COVID (both ways!) The Left sets the bar when it comes to work-arounds and denials. #Resist.

Do a quick Google search of “Al Gore concede.” Instead of the truth that Gore contested the 2000 vote for several weeks, USA Today insists, “No presidential candidate in modern history has refused to concede, but there’s no law that requires it.” In fact, everything that comes up on the first search page denies any legitimacy to today’s vote questioners, recounts, and well, truth.

The posturing and priming in which they are engaging is an outrage but, of course, the Left feeds on rage. Fear and loathing are the currencies of the enemies of freedom and truth.

Stay true to the cause. Throughout American history, many presidential elections have been heated, challenged, and recounted. It is predicted and prescribed in the Constitution — why else would there be a nearly three-month lag-time between Election Day on the first Tuesday in November and the transfer of power on January 21?

The winner of this highly contested election is not declared by the media, the political elites, or Van Jones. Perhaps, as in 2000, it will be left to the courts. Either way, there is plenty of precedent, and we should all hope that truth prevails, which means that the cheating Left must lose.