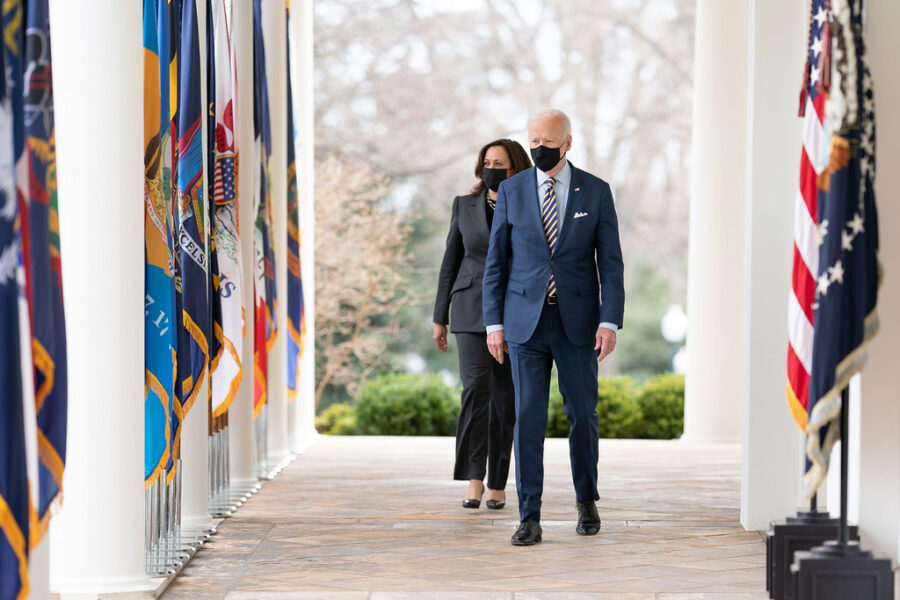 President Joe Biden and Vice President Kamala Harris walk from the Oval Office of the White House Friday, March 12, 2021, to the Rose Garden to deliver remarks on the American Rescue Plan.

We get to enjoy lectures on how systemically racist we are from a guy who palled around with segregationists and Klansmen, fought bussing, thinks blacks who didn’t vote for him aren’t really blacks, and is fresh off calling the man who won the Masters “boy.”

Yes, I’m talking about Joe Biden. The same Joe Biden who was surprised and excited to discover that Barack Obama was “clean.”

Biden’s reaction to the verdict in the Chauvin trial was a kick in the groin to the nation he supposedly leads.

“[George Floyd’s death] ripped the blinders off for the whole world to see the systemic racism,” Biden said. “Systemic racism — a stain on our nation’s soul.”

Strange words for man who has been the system for half a century. Strange also because nobody’s shown that race had a darn thing to do with Chauvin’s actions. And a racially-mixed jury just unanimously found him guilty beyond reasonable doubt.

Biden also spoke glowingly, lovingly of last summer’s protests. They “unified people of every race and generation in peace and with purpose to say, ‘Enough, enough, enough of these senseless killings.'”

So which is it? A unified country where people of every race rejects the actions of the few thuggish cops or a systemically racist hellhole exposed for the world to see?

It’s also convenient of Joe to forget the vast death and destruction and minority dreams decimated by his friends in BLM and Antifa during the “mostly peaceful” riots in Floyd’s name.

While describing this nation that has welcomed and uplifted people of all races, colors and creeds as systemically racist, Biden also forgot he was standing next to Kamala Harris. A woman of color and the second most powerful person on the planet. (Or most powerful, as it seems some days.)

Harris Forgets Her Own History

Harris also felt the need to lecture America about its “long history of systemic racism.”

“A measure of justice is not the same as equal justice,” Harris said. “This verdict brings us a step closer and the fact is we still have work to do. We still must reform the system.” Oh, the system.

As if Kamala Harris didn’t make her bones by gleefully and obsessively imprisoning mass numbers of black men for minor drug offensives when she was a D.A.

As if she didn’t owe her spot as VP to the influence of the 44th President of the United States, Barack Obama.

As if she hasn’t been “the system.”

But Nancy Takes the Cake

Still, as reactions to the Derek Chauvin verdict go, hands down the prize for most over-the-top goes to Nancy Pelosi.

A woman who has been part of the “system” since the days of Jim Crow as the daughter of Baltimore’s mayor when Maryland was still a hotbed of segregation. Quick aside: Did you know Hairspray was based on real efforts to integrate a local Baltimore teen dance show called The Buddy Dean Show that debuted when Pelosi’s pop ran the city? Unlike the movie and musical, Dean’s efforts failed. He got cancelled.

Pelosi danced right past the show’s “Negro Day” and rose through the system over the course of decades to become Speaker of the House.

From that perch, Nancy Pelosi declared George Floyd was no less than Jesus: “Thank you, George Floyd for sacrificing your life for justice,” she said, “Because of you and because of thousands, millions of people around the world who came out for justice, your name will always be synonymous with justice.”

Pelosi: "Thank you George Floyd for sacrificing your life for justice … Because of you and because of thousands, millions of people around the world who came out for justice, your name will always be synonymous with justice." pic.twitter.com/JfapSsKdtX

Even leftists were disgusted. “Nancy Pelosi thanks George Floyd for being murdered,” wrote a shocked Huffington Post editor Philip Lewis. “Sacrifice implies he had a choice,” wrote Melissa Evens of the L.A. Times.

“This type of lunacy is what happens when you view people as nothing but pawns for your cause,” journalist Annika Rothstein said.

And That is the Rub

And that is the rub. George Floyd’s life and death matter to these people only to the extent it can be exploited. If Derek Chauvin had been black, brown or purple, Nancy Pelosi wouldn’t be making Floyd into a religious icon. Biden wouldn’t be calling up, praying for the Floyd family. If Floyd were white, Harris would have little use for a white man passing bad money in a minority community.

If Biden-Harris were interested in people, not pawns, they wouldn’t be opening the borders wide to the same fentanyl that was surging through Floyd’s system. (The inevitable surge in fentanyl abuse will lead to how many more police interactions … and confrontations that go horribly wrong?)

They wouldn’t have met last summer’s violence … in predominantly black communities … with silence.

They wouldn’t have been bailing out rioters to bring even more harm to those communities.

They would be echoing the voice of the Christian MLK not the Marxist BLM.

They would embrace the concept of reconciliation, rather than reparation and retribution.

They would have built on America’s unified reaction to the Floyd video, rather than declare America as racist and rotten to the core.

Chauvin is going to prison for a long, long time. Justice is served. Yet, the left is not satisfied. And won’t be satisfied until they can lock up Uncle Sam himself and throw away the key.

The good news? We are not as divided as these actors need us to be. We see through their lectures and hype. We heard Martin Luther King, and are cultivating his “Promised Land.”