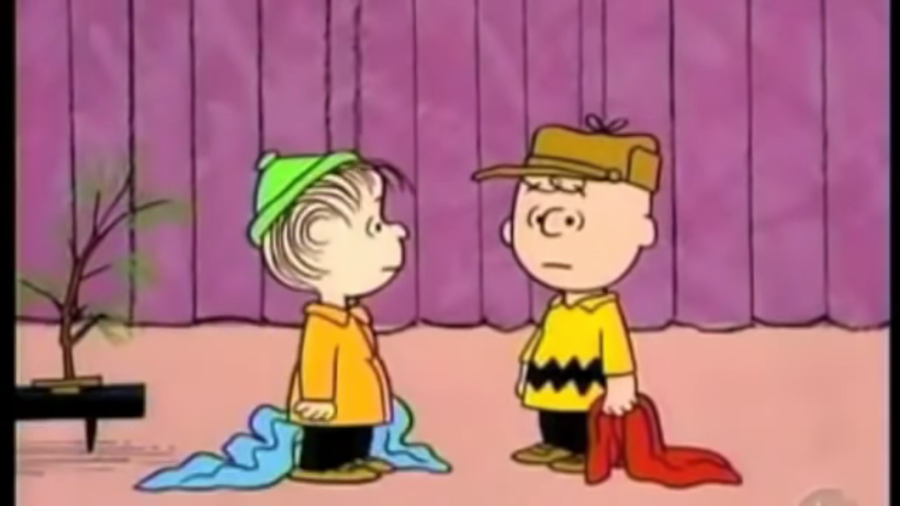 My wife and I watched A Charlie Brown Christmas again the other day, as we do every year Christmas. Poor Charlie Brown. He can’t do anything right. His friends all laugh at him. Even his dog laughs at him. Then his friends put him in situations where he’s bound to do everything wrong all over again. We think we’re having a bad year; Charlie Brown was having a bad life.

I don’t mean to downplay the year we’ve had. Some of us have sobbed over someone or something we’ve lost this year; all of us are at least sighing over it. I’m not allowed to visit my 97-year-old dad, I don’t know if I’ll have another Christmas with him, and I’m missing him badly.

Charlie Brown and his friends had to dig down deep to make it a merry Christmas. I’m finding I have to do the same this year.

The Charles Behind Charlie Brown

Some of us remember how eagerly we anticipated “Peanuts” coming to TV. It was by far the most popular comic strip, and had been for years. It was easily the best, in my opinion.

Charles Schulz, the cartoonist, said in an interview once that he was a mediocre artist — if he were better he’d have been doing real art. Maybe so, but he was a genius with life and relationships and finding funny things to say about it all.

And he was a believer in Christ; possibly more of a theological moderate than a conservative, but definitely one who honored Christ. I used to have a copy of Robert L. Short’s book The Gospel According to Peanuts. Short didn’t have to force his points one bit.

Schulz didn’t force things, either. He had a gift for preaching without preaching, as in this strip. Charlie Brown and Linus are walking in the rain. Charlie Brown, ever the fatalist, says, “The rain falls on the just and the unjust.” Linus answers, “That’s a good system.”

The True Meaning of A Charlie Brown Christmas

It’s just four words, but enough to get us thinking first of all that it is a system, implying that it’s not accidental, and that it’s good, so there is goodness in the world in spite of appearances. From there the mind moves naturally to thinking about the God who made it so. Just brilliant.

When it came to making that special, though, Schulz insisted on some preaching after all, though again, he did it totally painlessly. It may be the most Christian half-hour of comedy in all TV history, yet also possibly the most popular. The video clip below picks it up at right after Charlie Brown’s biggest failure, with everyone dumping on him, laughing at him, mocking him.

“Isn’t there anyone who can tell me the true meaning of Christmas?!” he cries out. Linus answers, “Sure, Charlie Brown, I can tell you the true meaning of Christmas.” Earlier Linus had complained about having to memorize lines for the play they were practicing, but here he quotes perfectly from Luke 2:8-14. And then he closes it: “That’s what Christmas is all about, Charlie Brown.”

Linus was right, of course. There’s a hidden story here, though. Executives at CBS, where it was first shown, worried that viewers wouldn’t like the jazz music Schulz wanted for the special. Since then the Linus and Lucy song has become iconic. (Here’s an extended version.)

The music almost didn’t happen, and somewhere, too, I recall questions raised about the voice actors. They’re very young. Often they’re very obviously reading from the page into the mic. Schulz insisted on children doing the parts, though, and it worked.

The worst part, though — the part that almost tanked the whole show — was Linus’s reading from Luke. The CBS execs all agreed, “You can’t read from the Bible on network television!” Schulz stood fast. It’s become a classic.

Charlie Brown Gets the Message

Charlie Brown stands fast, too. Through all his sadness, his failures, his hopelessness, he keeps on going. He keeps on with what I call no-matter-what strength, not only through this show but throughout the whole Peanuts comic strip run.

Christmastime 2020 is a time when a lot of us need no-matter-what strength. We can find it the same place Charlie Brown did: the message of Christ. Schulz handled that monologue beautifully, and he also did the right things with the scenes following it.

After Charlie Brown and his friends hear the message, he goes off by himself, his joy restored regardless of his friends. They stay behind and resolve to treat him as a friend. (Schulz need not use the word “repentance” when he displays it so well.) They meet for the final scene and all is finally well.

Note, though, that Charlie Brown’s joy got there ahead of his circumstances. Ours may have to as well. His friends’ joy improves noticeably, too, because the message of Christ moved them to give him love. This is the way Schulz always did it. Funny, isn’t it, how much a cartoon can tell us about reality?

Reality was hard in Charlie Brown’s comic world; it’s hard here, too, in this world. Why then did Linus’s Christmas message do so much good? Why has it touched so many hearts in real life? I’m convinced it’s because he was speaking real life.

It was and is a story of reality; real reality, not legend, not myth, and obviously not cartoon. So it really was and still is good news for all peoples. There really was a Savior born in the City of David who was and is Christ the Lord.

There really is a heavenly realm with angels we rarely see, and never in the same glory the shepherds did; which is probably just as well because we’d be “sore afraid,” too. And just as the word angel originally meant messenger, they really did carry a message from God, the King of the universe, who’d sent His Son to display His love and His salvation.

This, too, is reality. If you think it strange how truly the cartoon conveyed it, it’s only because the human who wrote the story told it truly.

A Concluding Word From My Own Real World

I think I should close with a word of honesty. I started writing this a day or so ago, but didn’t get very far. This morning I knew I had to sit down and finish it. That’s “had to,” as in, “didn’t much feel like it.” About a half dozen things had gone wrong in the first two or three hours of the day. I was unhappy, I was annoyed, and I was seriously stuck, looking at the prospect of writing the rest of this piece.

But then I looked at what I’d already written. I’m thankful to say there was enough there to remind me again of the message of Christ and of Christmas. That truth — that reality — was all I needed to turn my day around.

It can turn all of Christmas around, for those who know the message is real. So Merry Christmas to you — even in 2020!

A Charlie Brown Christmas is on Apple TV this year, streaming anytime. A subscription may be required.