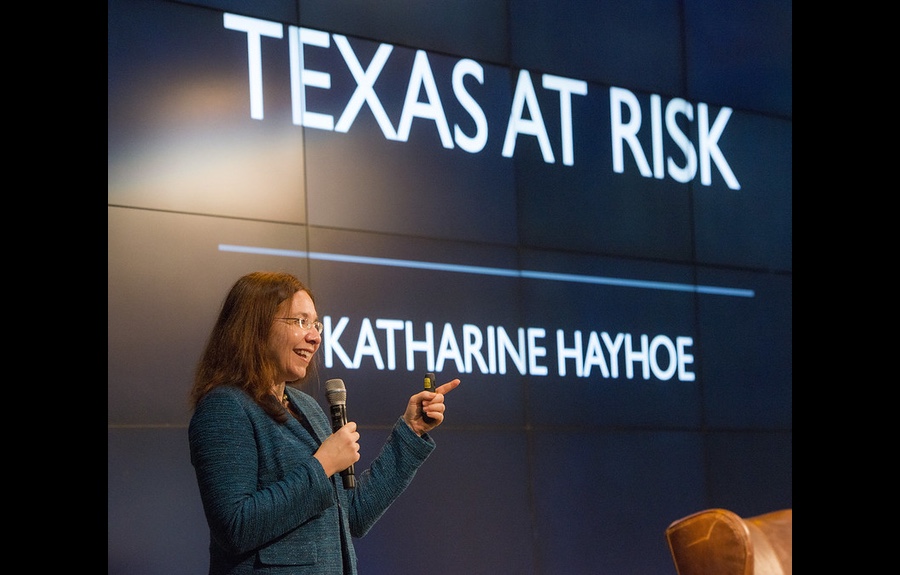 Late last year someone sent me a link to Dr. Katharine Hayhoe’s column “I’m a Climate Scientist Who Believes in God. Hear Me Out.” It was published in the New York Times October 31, 2019.

Dr. Hayhoe’s Ph.D. is in atmospheric science. But she teaches in the political science department at Texas Tech University. She criticizes evangelicals who disagree with her about the causes, magnitude, consequences, and appropriate responses to climate change, aka global warming.

I’ve noticed two common denominators in how most of the authors choose to identify themselves: first, as political conservatives, no matter what country they’re from; and second, in the United States, as conservative Christians, because the label ‘evangelical’ has itself been co-opted as shorthand for a particular political ideology these days.

Let us leave that question aside. I assume she really is. Her definition of an evangelical, she says, nevertheless,

stands in stark contrast to today’s political evangelicals, whose statement of faith is written first by their politics and only a distant second by the Bible and who, if the two conflict, will prioritize their political ideology over theology.

I have in mind The Cornwall Alliance for the Stewardship of Creation, which I lead. We are a network of nearly 70 evangelical Christian scholars. Among us are nine climate scientists. At least four of those have longer careers and greater research and publication records than hers.

Our Statement of Faith is adapted almost lock, stock, and barrel from that of Wheaton College, one of the premier evangelical institutions of higher learning. Was it, then, “written first by [our] politics”? Or has Dr. Hayhoe merely demonized those who disagree with her?

To stress her credibility, Dr. Hayhoe makes much of her being a scientist. In the process, she carefully distances faith from science. She says Christians frequently ask, “Do you believe in climate change?” And she replies, “No, I don’t!” — relishing listeners’ shock.

… climate change is not a belief system. We know that the earth’s climate is changing thanks to observations, facts and data about God’s creation that we can see with our eyes and test …. we believe that God’s love has been poured in our hearts …. [emphases added]

Dr. Hayhoe’s bifurcation of belief (faith) and scientific knowledge (as derived from observation) is a common misunderstanding. She thinks what we know “thanks to observations,” what we “can see with our eyes and test,” is not belief but knowledge. She writes as if thinking that 2 + 2 = 4, or that human activity is driving dangerous climate change, is not belief, but thinking that Jesus rose from the dead, or “that God’s love has been poured in our hearts,” is.

This is curious. The Apostle John began his first epistle,

The Apostle Paul instructs Christians to “test everything; hold fast what is good” (1 Thessalonians 5:21, emphasis added).

… as those who from the beginning were eyewitnesses and ministers of the word have delivered them to us, it seemed good to me also, having followed all things closely for some time past, to write an orderly account for you, most excellent Theophilus, that you may have certainty …. (Luke 1:2–4, emphasis added)

The Apostle Peter wrote, “… in your hearts regard Christ the Lord as holy, always being prepared to make a defense to anyone who asks you for a reason for the hope that is in you” (1 Peter 3:15), and “… we did not follow cleverly devised myths when we made known to you the power and coming of our Lord Jesus Christ, but we were eyewitnesses of his majesty …” (2 Peter 1:16) [emphases added].

It seems that Dr. Hayhoe’s understanding of belief, or faith, and its relationship to knowledge, particularly truths learned through science, doesn’t square well with the Bible she says she takes seriously.

On the contrary, a book-length discussion of the Biblical definition of belief argues convincingly that belief (faith) is simply assent (not merely spoken but mental) to understood propositions. It doesn’t matter whether the propositions are religious.

Whether she realizes it or not (for there is widespread confusion over this among genuine Christians), Dr. Hayhoe’s view is rooted in the existentialist epistemology of Søren Kierkegaard. He saw belief as a leap in the dark, contrary to evidence.

That, of course, is not the Biblical understanding. Eyewitness testimony to the risen Christ (1 Corinthians 15) is just one example of the kinds of empirical evidence mustered by its authors for various elements of the Christian faith.

But let us leave that aside.

Hayhoe Inconsistently Attributes Opposition, But Not Support, to Fear

My principal concern is for the caricature Dr. Hayhoe draws of people who disagree with her about climate change. She thinks their views are driven first and foremost by their politics. We’ve already given reasons to reject that claim.

The second driver of her critics’ views on climate change, she says, is fear: “fear of loss of our way of life, fear of being told that our habits are bad for society, fear of changes that will leave us worse off, fear of siding with those who have no respect for our values and beliefs.”

Well, I suppose for some people such fears do drive their thinking about climate change.

My chief objection to Dr. Hayhoe’s column, though, is that she fails to engage with her critics. She believes humans are primarily responsible for climate change. She believes its impacts will be dangerous to catastrophic. Further, as a defender of the 2015 Paris climate treaty, she believes we must spend scores of trillions of dollars replacing the global energy infrastructure to curb it.

Yes, some evangelicals reject her view because of politics or fear. Yet she assiduously avoids engaging with the arguments of hundreds of evangelical (and other) scientists (and other scholars) who disagree. These including climate scientists. (She claims that her view is the mainstream in her profession. But veteran climate scientist Dr. Neil Frank shows that there’s good reason to question that). Let me give you four examples.

First, global climate models greatly exaggerate CO2’s warming effect and so, for that reason as well as many others, are very unreliable.

Second, geologic history indicates that earth’s atmosphere has warmed and cooled cyclically throughout earth’s history. Further, atmospheric CO2 concentration has not driven (led) but responded to (followed) the warming and cooling.

Third, even if the mainstream (represented by the UN Intergovernmental Panel on Climate Change [IPCC]) is right about CO2’s warming influence, the amount of warming is likely too little to cause the catastrophes activists claim.

Fourth, policies promoted to curb global warming are unwise, even foolish. They would deprive people of the abundant, affordable, reliable energy indispensable to lifting and keeping whole societies out of poverty. Yet poverty is a far greater risk to human wellbeing than anything related to climate. They would have too little impact on temperature (0.3˚F reduction global average temperature in 2100 by the Paris treaty) to affect human or ecosystem wellbeing. They would achieve that at an absurdly high cost ($70 to $140 trillion — which means $23.3 to $46.6 trillion per tenth of a degree).

That’s money that could do far more good spent to provide pure drinking water, sewage sanitation, electrification, nutrition supplements, and health care to the world’s poor. All of these address far greater risks than anything posed by climate and weather.

These are just a few of the reasons why many scientists, economists, and other scholars disagree with Dr. Hayhoe. She doesn’t address any of them in her article. Far more can be found here and in thousands of other places, including in peer-reviewed journals.

Is Her Claim to Authority Convincing?

Now I’m about to move onto dangerous ground. I think it’s important to do so, despite the risks.

I harbor no ill will toward Dr. Hayhoe. I don’t mean to challenge her integrity or sincerity. Indeed, I don’t mean this to be in any way a personal attack. It is a serious, and sincere, challenge to one of her tactics.

With that caveat, notice afresh the headline on her article: “I’m a Climate Scientist who Believes in God. Hear Me Out.” There and in many other communications Dr. Hayhoe makes much of her status as a climate scientist — essentially claiming that status as authority.

Should she expect people to bow to her authority?

Appeal to authority is fine if no authorities disagree. When they do, it’s fallacious.

Second, consider this extraordinary remark about Dr. Hayhoe by one of the world’s leading climate scientists. Dr. Judith Curry has been a high-ranking author with the Intergovernmental Panel on Climate Change. She was a long-time professor and chair of the School of Earth and Atmospheric Sciences at the Georgia Institute of Technology. Now she is president of Climate Forecast Applications Network.

In commenting on a recent paper in Nature that urged editors and others to give less coverage (which is difficult to imagine) to “climate skeptics,” Dr. Curry produced a list of “real scientists” of whom the authors approved. Then she wrote, “Katherine [sic] Hayhoe (with HUGE MSM presence) doesn’t make this list; is anyone concerned about her outsized Kardashian Index?”

By “Kardashian index” Dr. Curry meant by it (as the article she linked explains) “a measure of discrepant social media profile for scientists” — i.e., a lot more fame than achievement justified.

When I read that, I was shocked. It is highly unlike the usually much more gentle Dr. Curry. I wrote and asked her about it. She replied:

Her PhD advisor at U of Illinois was Don Wuebbles, who is the coordinating lead author for the National Climate Assessment. He assigned KH in various key lead author roles, which helped bolster her scientific credibility.

So color me unimpressed. I realize she has carved out quite a niche among evangelicals.

For years Cornwall Alliance has publicly challenged Dr. Hayhoe to debate one of our climate scientists (here, for example). She has never responded.

It is, frankly, time for her to stop waving her credentials as a means of impressing evangelicals. She should deal seriously with the arguments of those evangelical scientists who disagree with her.

E. Calvin Beisner, Ph.D., is Founder and National Spokesman of The Cornwall Alliance for the Stewardship of Creation.