Celebrating All Saints’ Day and All Souls’ Day 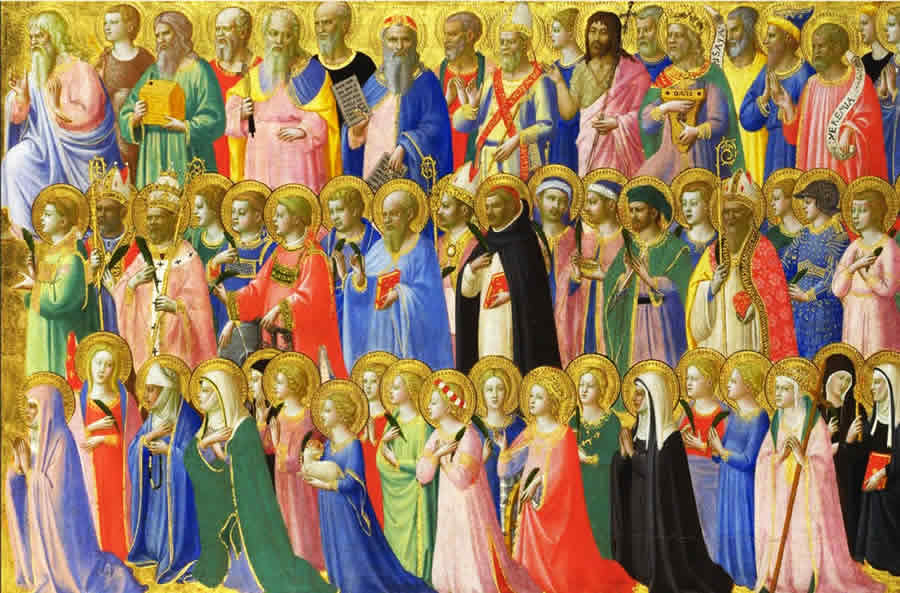 The Forerunners of Christ with Saints and Martyrs (about 1423-24) by Fra Angelico.

By Amelia Hamilton Published on November 1, 2015 •

On November 1, many Christians celebrate All Saint’s Day, also known as All Hallows, Day of the Saints (which is where we get the name hallowe’en — i.e., All Hallows Eve). It’s a day when many Christians give thanks for and honor for all the saints, known and unknown.

This feast has been celebrated for centuries, being noted in the British isles as being held on this date as far back as the 8th century. Pope Gregory founded an oratory in St Peter’s for the relics “of the holy apostles and of all saints, martyrs and confessions, of all the just made perfect who are at rest throughout the world.” In the days of Charlemagne, the celebration became widespread, and it became a day of obligation in the Frankish empire in 835. After the reformation, All Saint’s Day remained, and it still celebrated by many Christian denominations. Catholics are among those Christian traditions that hold that one can and should call on deceased saints to intercede with God on our behalf. The Collect Prayer from the solemnity of All Saints reads thus:

Almighty ever-living God,
By whose gift we venerate in one Celebration
the merits of all the Saints,
bestow on us, we pray,
through the prayers of so many intercessors,
an abundance of the reconciliation with you
for which we earnestly long.
Through our Lord Jesus Christ, your Son,
who lives and reigns with you in the
unity of the Holy Spirit,
one God, for ever and ever.

On November 2nd, many Christians also celebrate again, this time for All Souls’ Day. This is a day commemorating faithful Christians, especially relatives, who have passed away. Traditions vary widely within the Christian community. In the Western tradition, a specific day to celebrate the departed was in the church calendar by the end of the first millennium. In 1969, the Roman Rite was revised so that, if 2 November falls on a Sunday, the Mass is of All Souls, but the Liturgy of the Hours is that of the Sunday.

In the Anglican church, it is an optional observance seen as an extension of All Saints’ Day. While the observance lapsed during the reformation, it came back into practice during World War I as the Anglican community was hit with the loss of so many soldiers.

Catholicism includes praying for the departed during their time in Purgatory to speed them along on their journey to heaven. A Prayer for All Souls’ Day reads, “Eternal rest grant unto them, O Lord, and let perpetual light shine upon them. May the souls of the faithful departed, through the mercy of God, rest in peace. Amen.”

The Day We Remember the Dead We Love

What To Do With Halloween?