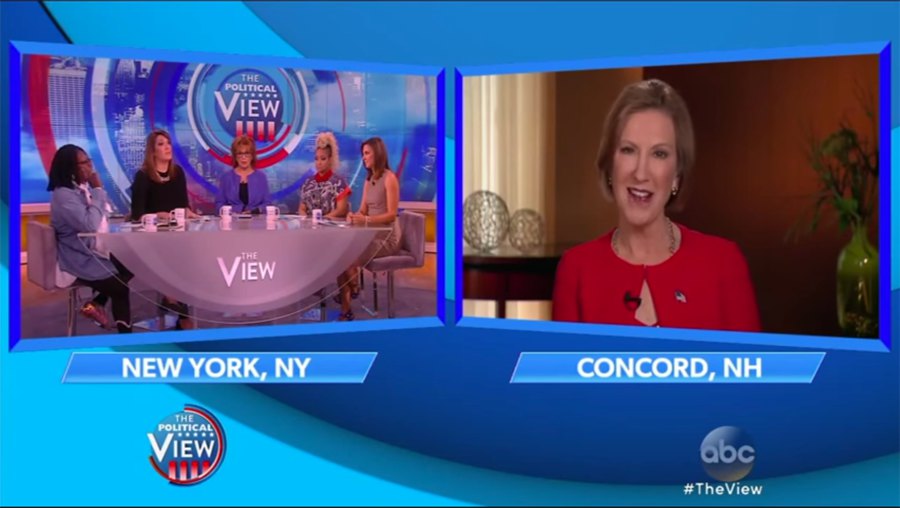 By Amelia Hamilton Published on November 6, 2015 •

Last week, the women of The View said some not-so-nice things about Carly Fiorina, referring to her smile as “demented” and comparing it to a Halloween mask. Today, Fiorina joined the show to discuss those comments and the issues. They tried to get under her skin but, as always, Fiorina kept her cool. Here are some of the best exchanges of the interview.

Fiorina began by keeping things civil, trying to set the tone. “I think we need to be able have civil conversations in this country about our differences as well as about the things that unite us,” she said. “I think, all too often, we demonize a messenger because we don’t like the mess. So, I’d just like to have a conversation.”

They asked Fiorina to tell the viewers more about her platform. “I want this nation to be again a place of limitless possibility, regardless of their circumstances, as it has been for me,” she said. “I think we are destroying too many possibilities for too many people. Leaders see and seize possibilities. It is what I have done all my life. The highest calling in a leader is to unlock potential in others. I am running for the presidency of the United States because I think we need to unlock the potential of this nation and restore possibilities to every American.”

Joy Behar wasn’t having it, saying it seemed that Fiorina was “against programs that let women make choices for their lives.” Her examples were abortion, government-mandated maternity leave and the minimum wage.

Fiorina responded by saying “Well, you’ve just gone through the litany of the left, that the only way you can be pro-woman is to agree with the left’s prescriptions for women. Here’s the problem, though, the prescriptions you’ve laid out aren’t helping women.” When she brought up the fact that Planned Parenthood is harvesting baby parts through late-term abortion, Whoopi Goldberg interrupted her to say that it was not true. “It’s interesting that Planned Parenthood just announced that they were no longer to take compensation for that.” Joy Behar had to make it all about her, saying “Please don’t say things that are not true, that offends my sensibility.”

I’m as surprised as you likely are to find that Joy Behar had such delicate sensibilities (or such a healthy regard for the truth), but set that aside. Carly forged ahead, unfazed by the women barely letting her getting a word in edgewise. “Let’s ask ourselves why women do better in a meritocracy. Women do better where they are paid not for time and grade, but where they are paid for their real value, their real contributions, what they produce. Women do better in those environments because women frequently come to the workforce later, they sometimes leave the workforce to care for their families and, yet, government jobs, union jobs, pay on seniority, time, and grade. That hurts women.” She ended by saying, “Meritocracies are what got me from a secretary to a CEO.”

Raven-Symone asked Fiorina why she said she would be Hillary’s worst nightmare. Is it because she was the only other woman? Once again, Fiorina had a great answer. “I think Hillary Clinton has made a case for her candidacy based on being the first woman president,” Fiorina said. “On the other hand, I would never ask people to vote for me just because I’m a woman. I’m going to ask people to vote for me because I’m the most qualified person to win this job and to do this job.”

She continued  “Instead of talking about our gender, we ought to be talking about is the issues which face this nation. So, what I’m going to ask Hillary Clinton to talk about is not her gender, but her track record. Her accomplishments, or lack thereof.”

Towards the end, Goldberg asked her how she would get a thicker skin about the jokes people will make about her. They accused her of trying to gain attention off of what The View said about her. “I think The View garnered a lot of publicity out of this ‘feud’ as well. I think that’s why you had me on your show at the top of the hour for a couple of segments.”

They also tried a gotcha type question, saying that it was clear she was trying to make lemonade out of lemons. Fiorina’s response? “You’re telling me you guys are lemons?”

As always, somebody thinks they’ll get the best of Fiorina in a debate, but she always nails it.